Many firsts, as historic summit between the leaders of North Korea and the United States takes place.

US President Donald Trump and North Korean leader Kim Jong Un signed a “comprehensive” document at the end of their summit in Singapore on Tuesday (June 12), as a once unthinkable meeting between foes appears to have yielded progress.

There were four major points stated in the joint declaration:

Mr Kim, Chairman of the State Affairs Commission, said: “Today we had a very historic meeting, overcoming our past history and embarking on a new beginning…the world will see a major change.”

Mr Trump, in turn, said a turning point had been reached in the long fraught US-North Korea relationship. “We’re both going to do something, and we’ve developed a very special bond…we’re going to take care of a very big and dangerous problem for the rest of the world.

“It worked out far better for both of us than anybody could have expected,” he added.

When asked about denuclearisation, he said “we are starting the process very quickly”, but did not give any detail. 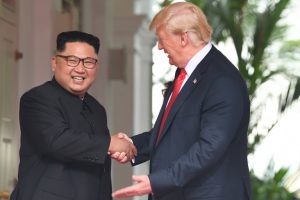 The day had started with a historic handshake between the two leaders at the summit venue.

At 9.04am, Mr Trump and Mr Kim strode into the courtyard at the hotel from separate sides, stood face to face for the first time and shared a 12-second handshake against a backdrop of American and North Korean flags.

The moment – tightly choreographed, with both men walking out at exactly the same time – was the culmination of weeks of uncertainty, false starts and finally, frenetic preparations on the part of the US, North Korea and Singapore.

From that point forward, the superlatives flowed. When asked how he felt as the two men sat down,  Mr Trump said: “I feel really great.  We’re going to have a great discussion and, I think, tremendous success. It will be tremendously successful. And it’s my honour. And we will have a terrific relationship, I have no doubt.”

Mr Kim said: “It was not easy to get here. The past worked as fetters on our limbs, and the old prejudices and practices worked as obstacles on our way forward. But we overcame all of them, and we are here today”.

A 41-minute one-on-one meeting ended with the two leaders smiling and waving to the media from a balcony and Mr Trump saying the discussion was “very very good”.

Then at the extended bilateral meeting, Mr Kim said he believed the summit was a “great prelude to peace”, to which Mr Trump agreed. “Of course there will be difficulties along the way, but as of today, a day that a good start has been made, I am determined to start a grand undertaking together,” he added.

Two patients from the Grace Assembly of God cluster, cases 49 and 73, were also discharged.  Two new cases of the coronavirus disease (Covid-19) were confirmed by the Ministry of Health (MOH) on Wednesday (Feb 26) and four others have recovered and were discharged. This brings the total number of cases here to 93, of which 62 have fully recovered. Case 59, the private hospital doctor, was among the four discharged. The 61-year-old Singaporean was confirmed to have the virus on Feb 13 and had been warded at the National Centre for Infectious Diseases. He is not linked to any of the five known clusters but is a non-medical contact of case 72, a 40-year-old man from China who holds a Singapore work pass. Case 56, a Banglad

Japan provides protective gear for use in battling coronavirus

The government of Japan has given personal protective supplies to the Ministry of Health to help medical staff if they are required to care for people infected with the coronavirus. The items were handed over at the Ministry of Health on Tuesday by the Ambassador of Japan to Laos, Mr Takewaka Keizo, to Minister of Health Assoc. Prof. Dr Bounkong Syhavong. The supplies comprised 4,680 isolation gowns, 6,100 gloves, 6,000 N95 masks, 13,200 surgical masks, 27 goggles, and 240 bottles of alcohol hand rub. Assoc. Prof. Dr Bounkong thanked the government of Japan for its assistance, saying “On behalf of Laos, we would like to express our appreciation to the government of Japan for its continuing support to our country.” The ministry has been st

Budget includes US$1,200 handout to each resident aged 18 and above, low-interest loans for small firms and tax cuts. Slammed by a perfect storm of trade war, prolonged unrest and coronavirus outbreak, Hong Kong’s already frail economy is likely to remain in a slump in the year ahead, even as the government carves out a more than HK$120 billion (S$22 billion) stimulus package with a generous cash handout to aid industries and individuals. In his budget delivery yesterday, Financial Secretary Paul Chan expressed hope that once the Covid-19 outbreak blows over, the economy will bounce back. Pending approval from Parliament – or the Legislative Council – Mr Chan said he would disburse HK$10,000 (S$1,800) to each Hong Kong permanent reside

The ongoing political crisis is seen as the ultimate battle between Anwar and Dr Mahathir as the 8th Prime Minister of Malaysia. The ongoing political crisis for the last few days is believed to end soon once the king decides after meeting all members of parliament. A total of 222 members of parliament have expressed their stand to the king. Voters would also figure out that the stand of the elected representatives picked by them during last elections. Voters witness political parties keep changing their stand. Each party is gauging the stand that would best fit its political interests. They are judged by voters based on the reasons cited to save the country. We need to have a new government to run the country and the current situation should not be

Laos’ national airline, the Lao Airlines State Enterprise, will suspend flights to the Republic of Korea beginning in March after a large number of passengers cancelled their bookings amid the coronavirus outbreak. Director of the airline’s Commercial Department, Mr Noudeng Chanthaphasouk, told Vientiane Times that a flight from Vientiane to Seoul did not depart on Tuesday because all the passengers cancelled their reservations. “We have very few passengers on the Vientiane to Seoul flight. We have to fly back to Vientiane empty because many Koreans have stopped travelling overseas since the outbreak of Covid-19 in China,” he added. “Meanwhile, we fly from Vientiane to Seoul once daily and have to bear the high cost of flying empty,