The National Disaster Mitigation Agency (Basarnas) received a report on Monday morning that air traffic control had lost contact with a Lion Air flight from Jakarta to Pangkalpinang in Bangka Belitung.

The Boeing 737 MAX aircraft was carrying 189 people when it lost contact with air traffic controllers shortly after take-off.

A vessel traffic service officer in Tanjung Priok, North Jakarta, Suyadi, told The Jakarta Post that at 6:45 a.m. he received a report from a tugboat, AS Jaya II, that the crew had seen a downed plane, suspected to be a Lion Air plane, in Tanjung Bungin in Karawang, West Java. 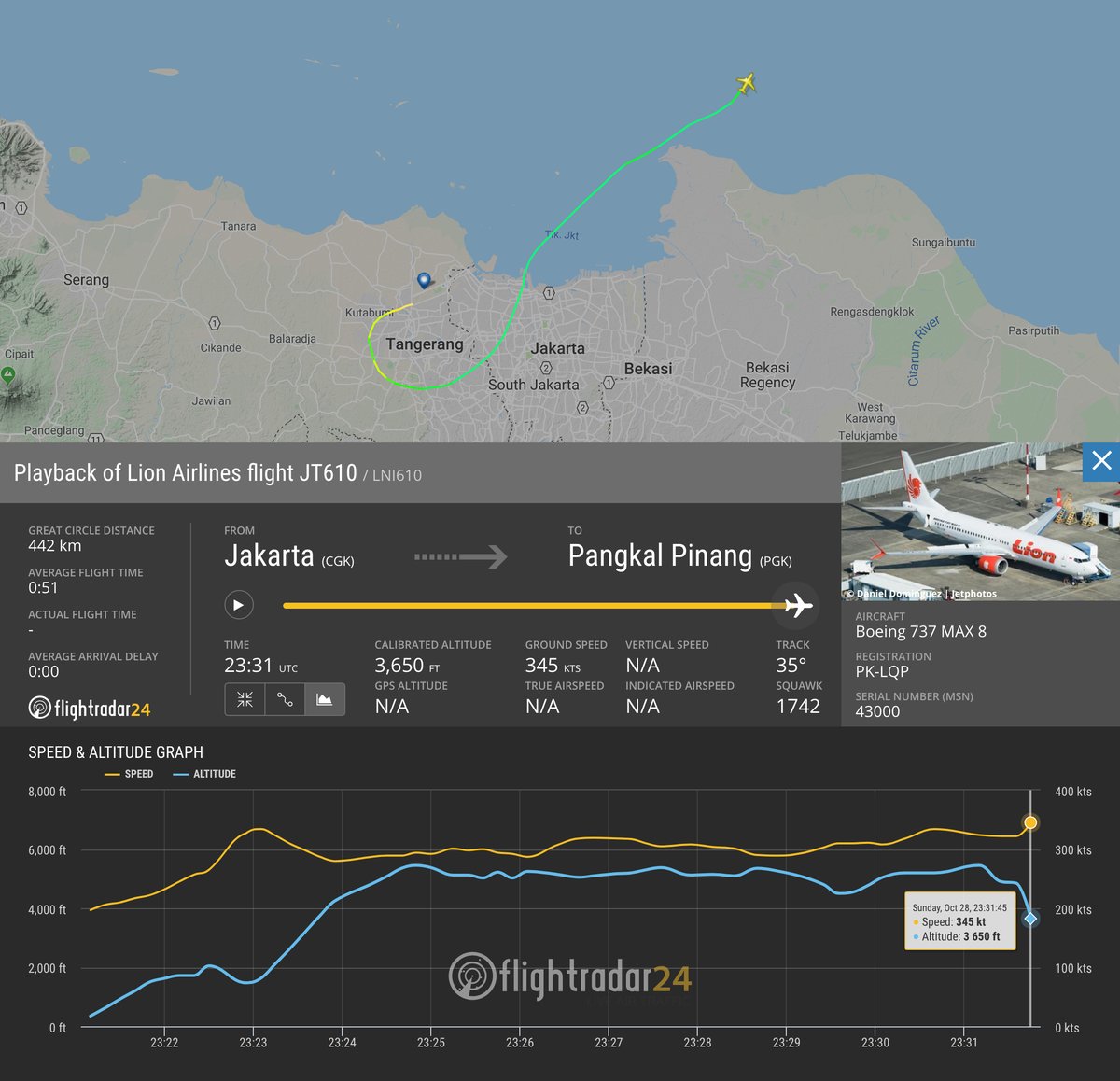 “At 7:15 a.m. the tugboat reported it had approached the site and the crew saw the debris of a plane,” Suyadi said. As of 9 a.m. there was no report about passengers or the plane crew, he said. Two other ships, a tanker and a cargo ship, near the location were approaching the site, he said, and a Basarnas rescue boat was also on the way. Divers deployed for search and rescue operations have recovered the belongings of some passengers, but they have yet to find any survivors, according to the Straits Times.

Several identity cards, bank books and driving licences have been found, but there is still no sign of the black box from the aircraft, said Brigadier-General (BG) Nugroho Budi Wiryanto, who is deputy head for operations at Indonesia’s national search and rescue agency Basarnas.

When asked if divers have found any survivors or bodies, he would say only that there were some signs of remains such as limbs, but he reiterated that the search is still ongoing.

Indonesia’s President Joko Widodo said the authorities would do their best to find and rescue the victims of Monday’s air crash.

“I will continue to pray that victims can be found immediately. I’m deeply concerned for the families of the victims, but we hope the victims’ families will stay calm while waiting for the SAR (search and rescue) teams which are currently working hard at the scene. I also ordered the KNKT to immediately investigate this incident and submit the results of the investigation as quickly as possible,” said Mr Joko.

More than 300 personnel from Basarnas, the Indonesian military (TNI) and police have been mobilised for the search and rescue operations, which will be carried out for seven days, and extended by three days if needed.

Lion Air chief executive Edward Sirait said he is still waiting for updates on the status of the 189 people on board. He also confirmed that according to the pilot’s records, the plane was in a condition to fly.

“There was a technical problem reported after the previous flight the night before from Denpasar to Jakarta, and the problem was dealt with and the plane was subsequently released to fly by a certified engineer,” he added.

Mr Sirait also said Lion Air stood by its pilots and was sure they operated according to required procedures.

“The weather was also good, everything was clear before the incident,” he added.

On a request by the pilot to return to base shortly after take-off, Mr Sirait would only say that Lion Air is still trying to verify the information.

Taiwan’s Central Epidemic Command Center (CECC) on Friday announced that more than 722,000 people — 600,000 using the NHI app and 122,000 more using the Emask system — had successfully registered for purchasing face masks as of 1 p.m. Asked about people who have reportedly tried to register again, CECC Chief Commander Chen Shih-chung called on the public to stop, stressing that authorities are committed to providing a set of face masks to each user prior to March 18, the official deadline for registration. Regarding some reported phone scams on payment requirements for face masks, Chen asked users to remain vigilant. Access is limited to Taiwan residents who need to register their NHI number, obtain proper digital certification and downloa

Covid-19 outbreak will continue for a year or longer; more stringent measures may need to be put in place, says PM Lee

Expat volunteers have been active in helping the city overcome the COVID-19 outbreak. Twelve foreign residents in Shanghai have joined a volunteer team to help with the city’s COVID-19 prevention and control. Located in Minhang district, the team was established on Feb 10 by the Jinfeng International Community Development Association, which aims to promote the development of Huacao town and the Jinfeng International Community by organising themed activities and public welfare events. Pakistani Amir Shafiq Khan joined the team to give back. “It’s easy to run away to another country, but I felt that my family and I should contribute to China in this difficult time as it has always offered opportunities to us,” says Khan, who has lived in

ST Index careens into bear territory for the first time since January 2016 Many stock markets across Asia, including in Singapore, followed the United States into bear territory after US President Donald Trump stopped short of offering a detailed rescue package as the coronavirus outbreak was declared a global pandemic. Adding to fears, oil prices slumped further. The Straits Times Index (STI) careened into bear territory for the first time since January 2016. The last time that the STI was in a bear market – where stocks have fallen at least 20 per cent from their recent high – was during the oil price rout in 2016. The STI finished down 3.77 per cent yesterday, and more than 21 per cent down from a peak of 3,407.02 on April 29 last year.

askST: Can coronavirus be spread by sweat, or via activities such as singing?

There is currently no evidence showing that the virus can be transmitted through one’s perspiration. Concerns have been raised over social activities such as singing and exercising in the light of the coronavirus outbreak. As of Wednesday (March 11), Singapore’s largest Safra Jurong cluster of confirmed coronavirus cases went up to 40, against a total of 178 cases. The patients, who had attended a Feb 15 Chinese New Year celebration held in the ballroom of Joy Garden restaurant at Safra Jurong, are members of a Hokkien singing group. This has raised concerns as to whether the disease, known as Covid-19, can be transmitted through singing. Similar concerns have been expressed about whether the virus can be spread through sweat b