The search for Lion Air flight JT610 is now focused under water, with 30 skilled divers being deployed to the Java Sea to search for the main body of the aircraft.

The search for the black box is crucial to answering why a brand new plane flying on a clear day could suffer such an ill fate.

National Search and Rescue Agency (Basarnas) head M. Syauqi said that since 11 a.m. on Monday no more debris had been found floating on the surface. “So we have started the underwater search and the process is still ongoing,” he said at the airport.

He said the 30 special divers employed a diving pattern following the prediction of movement of objects, which is calculated based on the time the object fell into the water, as well as the current sea and wind conditions, said Syauqi.

“So the divers are not diving randomly, but in the location where the object is predicted to have moved based on weather and wind movement,” he said.

Syauqi also said that based on the search and rescue standard operating procedure, the search would last for seven days, with an additional three days if the object has not yet been found.

President Joko “Jokowi” Widodo said at the same press conference that he had ordered a 24-hour search on Monday night as the remaining victims’ bodies, the black box and the plane’s body, had not yet been found.

The joint search and rescue team members, numbering around 300, are from Basarnas, the KNKT, the National Police and the Indonesian Military as well as the Transportation Ministry and the private sector. 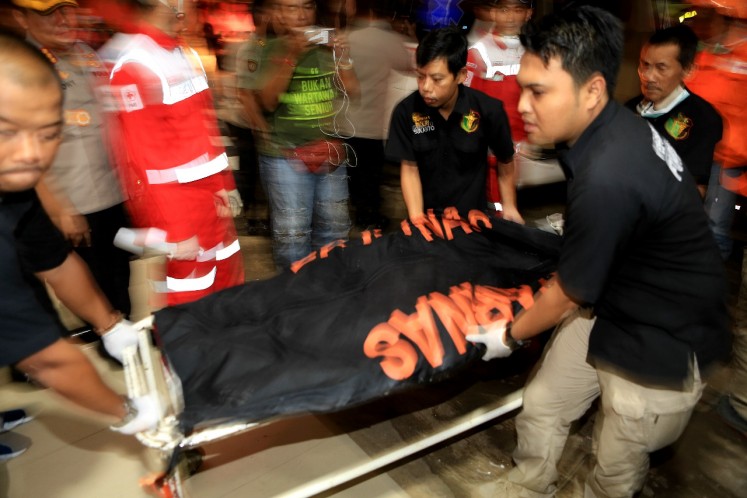 Help from a neighbor

KNKT head Soerjanto said his office would send one more ship that would carry the more advanced equipment for the underwater search from Singapore. The equipment is expected to be more sensitive in locating the black box.

“Tonight, we will send one more ship, Baruna Jaya I. Now, we are waiting for friends from Singapore that will also bring equipment to help us. They will arrive soon in Cengkareng and we will head to the ship as soon as they arrive here tonight,” said Soerjanto.

Several ships that have been deployed are equipped with multibeam echo sonar, which could help to locate where the debris sank underwater.

Soerjanto said he hoped the search goes well, especially since the Meteorology, Climatology and Geophysics Agency (BMKG) predicted that weather in the search area for the next few days would be clear.

BMKG in its statement earlier reported that the weather when the accident happened was clear.

“Before the flight departure, the BMKG provided information about the weather forecast according to satellite imaging, radar imaging and even the local weather forecast using Automatic Weather Observation System (AWOS). The information consists of wind direction and velocity, visible range, temperature, pressure, etc. The weather forecast also includes the airport condition at the time of departure, the airport condition at the time of arrival, and the weather throughout the flight route,” said BMKG head Dwikorita Karnawati in a press statement on Monday.