The earthquake struck the central island of Luzon Monday afternoon.

Rescuers dug into rubble to reach people trapped in a supermarket that collapsed in Porac town, Pampanga province, after a 6.1-magnitude earthquake shook Luzon on Monday afternoon.

The National Disaster Risk Reduction and Management Council (NDRRMC) reported that it was verifying reports that five people were killed in the earthquake.

Three bodies were reportedly pulled out of the collapsed supermarket, but the NDRRMC said that report was “for validation.”

Pampanga Gov. Lilia Pineda reported that eight people died, including an elderly woman and her grandchild who were killed when part of a wall beside their house fell on them in Barangay Santa Cruz, Lubao town, as the earth shook.

The powerful earthquake struck at 5:11 p.m. rocking Luzon, including Metropolitan Manila, and sending thousands of people fleeing high-rises, and bringing mass transportation in the capital to a standstill.

The Philippine Institute of Volcanology and Seismology (Phivolcs) said the quake was centered on the town of Castillejos in Zambales province.

Scientists from the US Geological Survey logged the quake’s magnitude at 6.3, and said its epicenter was 40 kilometers below the earth’s surface.

Phivolcs said the quake was tectonic in origin and had a depth of 21 kilometers.

The temblor was felt at varying intensities in Metro Manila and surrounding provinces.

It was also felt in Baguio City.

Phivolcs Director Renato Solidum said that while the temblor was not considered a major earthquake, damage and aftershocks were expected in several areas that had been hit.

As of press time on Monday night, at least 17 aftershocks had been recorded by Phivolcs.

Phivolcs Deputy Director Bart Bautista said around 100 aftershocks were expected in a span of one to two weeks after a 6.1-magnitude earthquake.

Solidum said there was no danger of tsunami after the quake.

In Metro Manila, office workers piled out onto the streets as emergency alarms blared after the quake struck.

Pictures of shaking buildings and cracked walls flooded social media feeds, along with photos of people gathered on sidewalks after fleeing office and residential buildings.

Operations by Metro Manila’s three light-rail transport companies were suspended after the temblor, forcing thousands of commuters heading home after work to take other means of transportation.

Rail services will resume on Tuesday.

Several schools in the metropolis called off classes.

A building of Emilio Aguinaldo College on San Marcelino Street in Manila’s Ermita district tilted but was stopped from falling by a building on the next block. 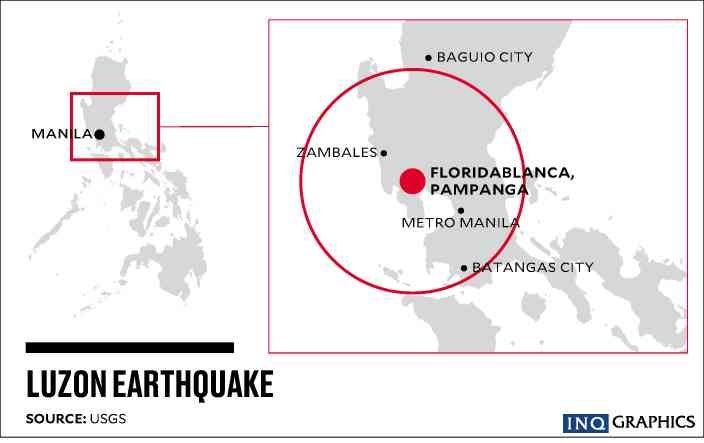 Fire broke out at Bataan Refinery Center in Limay town during the earthquake.

Electricity was also cut in the provinces of Quezon, Batangas, Camarines Sur and Sorsogon, but it was restored before long.

The temblor damaged a portion of the megadike in Pampanga.

The 57-kilometer megadike—stretching through the City of San Fernando and the towns of Bacolor, Porac and Santa Rita—is the province’s last defense against lahar flows from Mt. Pinatubo.

In Porac, Santa Catalina Church was “significantly damaged,” according to a post by the Archdiocesan Committee on Church Heritage.

The cross on top of the belfry of St. Augustine Church in Lubao, said to be the oldest church in Pampanga, was slightly damaged.

Why Hong Kong residents turned out in record numbers to vote

Many say events of past 5 months galvanised their desire to exercise their democratic right. Amid mild autumn weather and under a clear blue sky in Lek Yuen, the oldest public housing estate in Hong Kong’s Sha Tin, a snaking queue formed outside the community hall shortly after dawn yesterday. It was the constituency’s polling station of the day, and hundreds were in the line before the opening time of 7.30am to vote for their district councillor, one of the lowest rungs of Hong Kong’s elected offices. The scene was repeated across the territory’s 18 districts, where nearly three million people showed up to vote in elections that are usually a quiet affair, with chosen officials confined to dealing with noise complaints and local infrastructure improvement projects. The officials, however, also represent 117 of the 1,200-strong Election Committee that chooses the city̵

They are believed to be online scam workers. Malaysian authorities have nabbed nearly 1,000 China nationals who were believed to be working in the country with an online scam syndicate, local media reported. The bust on Wednesday (Nov 20) by the Immigration Department in Cyberjaya was the biggest conducted this year, Bernama news agency said. On its Facebook, department said the raid was conducted at the syndicate’s headquarters in Cyberjaya. Immigration director-general Khairul Dzaimee Daud said the syndicate was operating from a six-storey building in Cyberjaya, a high-technology zone located about an hour south of Kuala Lumpur. The raid was the end result of a month’s worth of surveillance, following complaints from the public. The office was well secured, with guards stationed at each floor and rooms only being accessible with access cards, The Star reported.

With contributions by AFP. A Dutch-led probe into the shooting-down of flight MH17 over Ukraine in 2014 released new intercepted phone calls on Thursday (Nov 14) between high-ranking Russian officials and suspects facing trial over the crash. Investigators said they were making a “new witness appeal” based on “recorded telephone calls between the leaders of the DPR (Donetsk People’s Republic, a separatist group) and high-ranking Russian officials.” “Ties between Russian officials and DPR leaders appear to have been much closer” than originally believed, Mr Andy Kraag, the head of Dutch police’s Criminal Investigations Division, said in a video statement. Investigators said in June that they were going to put three Rus

For some families, it is too little, too late. The Supreme Prosecutors’ Office on Monday launched a special investigation unit to probe allegations surrounding the sinking of the Sewol ferry in 2014. During a press briefing at the Seoul Central District Prosecutors’ Office, the unit said it is “committed to making its probe so thorough that it will be the last one to be conducted into the Sewol sinking.” The unit will take on investigations conducted by a provisional state commission formed in January 2015 with a fact-finding mission on the Sewol case. This is the prosecution’s first organized effort concerning the disaster from over five years ago. On April 16, 2014, the 6,825-ton ferry with a passenger capacity of 921 sank off the coast of South Jeolla Province en route to Jeju Island, killing over 300 people, mostly children. The 18-member prosecution unit is headed by

The Indian court has deprived Muslims of the disputed plot because they couldn’t show exclusive possession before 1857. On page 215 of the Ayodhya-Babri Masjid verdict, delivered by a five-judge bench on Saturday, the Supreme Court makes a crucial statement of logic: “It is true that in matters of faith and belief, the absence of evidence may not be evidence of absence.” But in its final findings, the court contradicted this same logic. The crux of the judgment that India has awaited since 1949 is that Muslims failed to show unimpeded possession of the disputed site in Ayodhya between 1528, when the mosque was supposedly built by Mughal emperor Babur, and 1857, when, after a clash between Muslims and Hindus, a railing was erected between the inner and outer courtyards at the disputed site. The inner courtyard is where the mosque demolished by Hindutva mobs in 1992 stood. The outer courtyard has se