Academics say Thailand has not been adequately protecting workers’ rights – both Thai and foreign – and though there is some improvement, existing laws and regulations still limit their rights.

Their comments came after the US Trade Representative (USTR) announced last week that President Donald Trump was suspending trade preferences worth $1.3 billion in trade preferences for Thailand under the Generalised System of Preferences (GSP) based on its failure to adequately provide internationally recognised worker rights.

The USTR said that “despite six years of engagement, Thailand has yet to take steps to provide internationally recognised worker rights in a number of important areas identified in a 2015 petition from the American Federation of Labour and Congress of Industrial Organisations, such as providing protections for freedom of association and collective bargaining. GSP eligibility will be revoked effective six months from today for approximately one-third of Thailand’s GSP trade, which totalled $4.4 billion in 2018”.

“For about 25 years, Thailand’s labour movements have been campaigning for the ratifying of two key labour conventions, namely Freedom of Association and Protection of the Right to Organise Convention , 1948 [No 87] and Right to Organise and Collective Bargaining Convention, 1949 [No 98],” Lae added.

The existing law allows the existence of labour unions if they are registered with the authorities. Lae said that while some people have speculated that the US is retaliating after Thailand announced a ban on glyphosate, a weed-control chemical, he said that is not the case. Labour issues in Thailand have long been closely monitored by the US and other related international organisations, he added.

The junta-backed government made some progress in resolving the human-trafficking problem, which led the US last year to promote Thailand from the Tier 2 Watch List to the Tier 2 level of US Trafficking in Persons Report.

The previous government also worked on solving fishing practices that led to the European Union removing Thailand from the list of “warned countries” – a so-called yellow-card – in January as recognition of its progress in tackling illegal, unreported and unregulated (IUU) fishing. However, Lae said, the overall situation of human rights in Thailand still needs to be improved.

Some people, especially Labour Minister MR Chatu Mongol Sonakul, also fear that ratifying the two conventions would give more rights to foreign workers. However, Lae said he does not agree with this. “All workers should be given equal rights, be they Thai or foreigners,” Lae added.

Thais should not forget that 3 million foreign workers contribute to Thailand’s exports and its gross domestic product. Also, he said, Thai businesses make a lot of money from these industries. Some people confuse the interest of employers with national security, which is not the case, he pointed out. They should also ask what conditions these workers face, such as having to go offshore for many months on fishing trawlers or ask how they make a contribution to the local economy. “Since they live in Thailand, they spend a large part of their earnings here,” he argued. 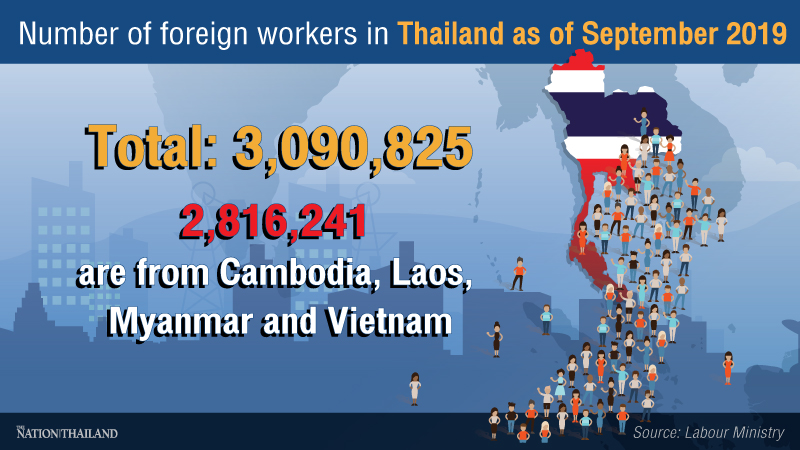 Yongyuth Chalamwong, research director at the Thailand Development Research Institute (TDRI), shared similar views, saying that Thailand needs to think about economic security and image of protecting human rights recognised by the international community. About 90 per cent of countries have ratified the two conventions.

The former junta-backed government had set up a committee to study the pros and cons of the ratification of the two conventions and found that the economic benefits outstrip concerns about national security. Things have changed a lot since the influx of foreign workers. Now they register with the authorities and can be monitored. So, concerns that they may be spying for foreign governments is not a serious issue, he said.

Tarit Sorat, vice president of the Employers’ Confederation of Thai Trade and Industry, however, said businesses, especially exporters, are not very concerned about losing tax privileges under the GSP program. The European Union has completely removed tax privileges since 2015 because Thailand has now reached the upper-income status. What is of concern, he said, is the strengthening of the baht. However, he said, that since the US is a key market for Thailand, it should be very careful when it deals with the US government.

7 of 10 Filipinos worried by presence of Chinese workers

China has increased its presence in the archipelago. The rising presence of Chinese workers in the country worry seven out of 10 adult Filipinos, according to the latest Social Weather Stations (SWS) survey, as the government recently launched a crackdown against Philippine offshore gaming operators (Pogos) which mostly employ Chinese nationals. The noncommissioned survey, conducted from Sept. 27 to 30, found that 31 percent “worried a great deal,” while 39 percent are “somewhat worried.” Highest in Metro Manila The proportion of those who were worried about the increasing number of Chinese workers in the country was highest in Metro Manila at 75 percent, followed by the Visayas at 71 percent, Luzon outside Metro Manila (69 percent) and Mindanao (67 percent.) About half of the respondents agree that the rising number of Chinese workers is a threat to national secur

Imran hopes to unleash ‘potential of youth and women’ with new venture. Prime Minister Imran Khan on Thursday said that with the introduction of the ‘Digital Pakistan Vision’, the full potential of the contribution of youth and the women to the economy will be unleashed. According to a press release from the Prime Minister Office: “The Vision sets Pakistan’s digital ambition and has been designed for the government and the private sector to work towards a digitally progressive and inclusive Pakistan.” Speaking at the launch ceremony of the initiative, the prime minister regretted not having launched it at the very beginning when his government was formed. “I should have given attention to Digital Pakistan earlier. This is the most important thing for Pakistan right now, especially its youth. The whole world is moving forward digitally and we have been l

The company is suing the FCC, the latest in a series of legal tussles. The legal battle between Huawei Technologies Co and United States government intensified on Thursday. The Chinese tech heavyweight announced a legal challenge to the US Federal Communications Commission, seeking to overturn the latter’s order that bans telecom carriers from buying the company’s equipment via federal subsidies. The move is the latest push by the world’s largest telecom equipment maker to pursue fair competition and treatment amid a slate of restrictions from Washington. Analysts said the FCC ban would have very limited impact on Huawei’s financial performance, but labeling the company as a national security threat would cause far-reaching reputational harm. In a petition filed in the US Court of Appeals for the Fifth Circuit on Thursday, Huawei asked the court to declare the FCC order un