The attack renewed a growing call for the government to take necessary and effective efforts to ensure a fair and just District Council election, slated for Nov 24.

Ho, who was stabbed on the left side of his chest, was conscious when taken to Tuen Mun Hospital. Two more people from Ho’s campaign team suffered injuries to their hands and arms in the attack.

Around 9 am, a man dressed in blue and holding a bouquet approached Ho as a supporter. He fished out a knife from his bag while pretending to look for his cell phone after he had asked Ho to pose for a photo with him. The assailant was subdued at the scene and subsequently arrested by police.

In a statement issued around 11 am, Ho described the attack as “a dark moment” in Hong Kong’s District Council election. He said a spate of unlawful activities were impeding the electioneering of pro-establishment candidates but pledged to fearlessly continue his campaign.

The city has been haunted by protests, often violent, during the past five months.

A spokesperson for the SAR government said police would look into the attack and would strictly enforce the law to maintain law and order. Pointing out that Hong Kong had always been pluralistic and inclusive, the spokesperson said in a statement that people should be rational, peaceful and respectful when expressing opinions.

Chief Executive Carrie Lam Cheng Yuet-ngor condemned the attack. While in Beijing on Wednesday, Lam stressed the SAR government will make every effort to ensure a fair, safe and just election. Society as a whole should also step forward to oppose violent behavior that undermines the election, Lam said. 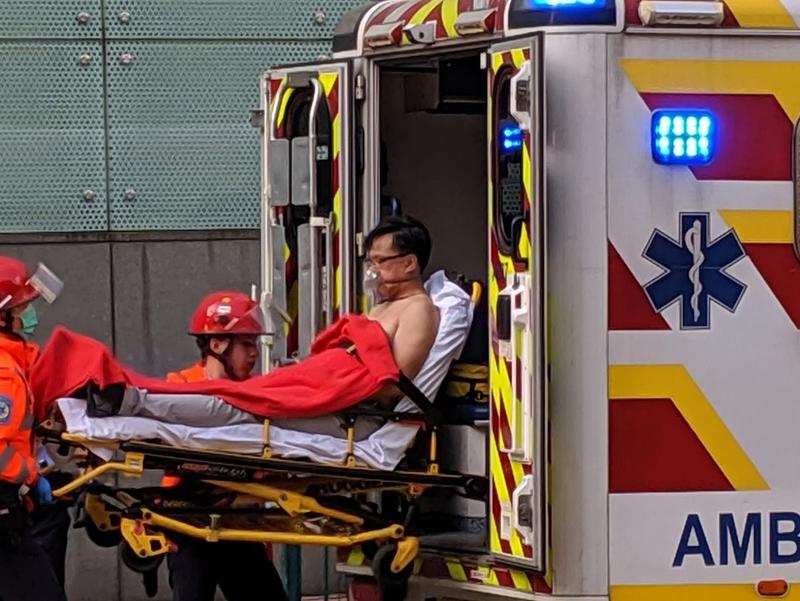 Ho is running for district councilor of Lok Chui, Tuen Mun. Lo Chun-yu and Chiang Ching-man are also vying for the seat.

In a statement, the association said the attack was an outrageous crime that had not only endangered Ho and his election team, but also severely undermined the upcoming District Council election.

The association urged the SAR government and police to strictly enforce the law and keep candidates and their campaign teams safe so that a fair election could be held.

Ng said “black terror” will not hold back candidates who truly love the city and want to contribute to its development.

The Democratic Alliance for the Betterment and Progress of Hong Kong said many DAB candidates had been harassed during electioneering. Some were besieged and had their offices broken into, set on fire and vandalized, DAB chairwoman Starry Lee Wai-king said.

Following the attack, the DAB met HKSAR Chief Secretary Matthew Cheung Kin-chung to discuss how to ensure a fair and safe election.

After the meeting, Lee said Cheung promised that the government would call an emergency meeting to discuss the situation.

Lee revealed that one of the party’s candidates was also attacked on Wednesday morning. She called on the government to beef up security at voting booths on Nov 24 to guarantee that voters can cast their ballots freely.

Echoing Lee, lawmaker Martin Liao Cheung-kong said the government has a duty to ensure the safety of candidates contesting an election.

Also on Wednesday, about 30 people handed a petition letter to Chairman of the Electoral Affairs Commission Fung Wah, urging the commission to scale up efforts to ensure the personal safety of candidates, voters and election volunteers, as well as fair elections.

“The riotous attack is to wipe out righteous voices by deterring residents from voting freely,” said local resident Fu Chun-chung at the EAC office building after Ho’s attack.