TOKYO – Sixty percent of corporate leaders surveyed by The Yomiuri Shimbun think the country’s economy will pick up over the next half-year or so.

Among the 30 leaders of top firms polled by the Yomiuri, 18 said the economy would improve over the next about six months. This represented a decline of 10 executives from a year earlier, when more than 90% of respondents said it would make a recovery, pushed down by high raw materials prices and concerns about a slowdown in the global economy.

The survey was conducted via interviews or in writing between mid-November and mid-December last year.

Regarding the business forecast for the next six months or so, 18 executives said the economy would recover moderately, while eight said it would come to a standstill. Three said it would decline moderately.

No one said the economy would take off quickly.

With more than one answer allowed, 17 executives said the recovery would be caused by an upturn in private consumption, while 10 cited expected progress in balancing economic activities with the prevention of infections through such means as the use of COVID-19 vaccination certificates.

Six respondents who said the economy would hold steady or moderately worsen cited higher oil and raw material prices as the reason for their outlook. Another six cited the sluggish U.S. economy.

Regarding the current state of the economy, 21 respondents said it is experiencing a moderate recovery, while seven said it has stagnated. One said it is declining moderately.

With more than one answer allowed, 21 executives said the recovery was spurred by an upturn in private consumption, while 12 named the recovery in investment in plant and equipment.

Sixteen executives, or more than 50% of respondents, said the economy would grow in real terms by at least 1.0% but less than 1.5%, indicating the prevailing view that slow growth will continue.

Twelve executives said the dollar-yen exchange rate would peak at around ¥145 in 2023, the most popular choice among the respondents. 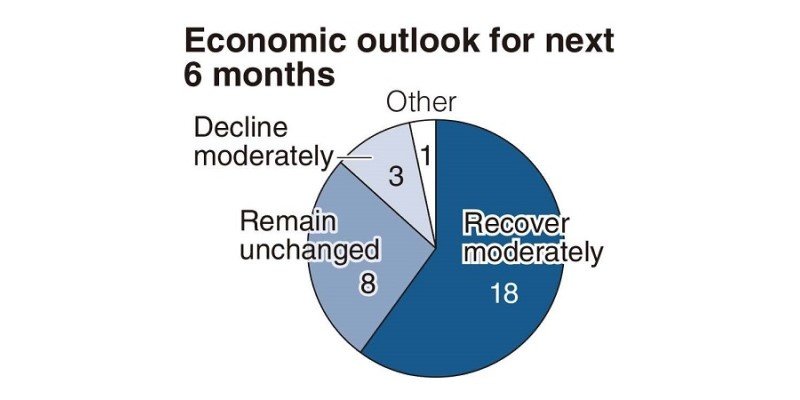 17 praise BOJ policy
The executives also answered questions regarding the monetary easing measures implemented by the Bank of Japan and the government. Haruhiko Kuroda’s term as BOJ governor expires on April 8.

Seventeen said they appreciated the Bank of Japan’s monetary easing policy, while none of the respondents said they did not. Six said it was hard to say either way.

“Caution is required when changing austerity measures, but now seems to be a good time to look at measures to introduce an exit strategy [to normalize monetary policy],” said Satoru Komiya, president of Tokio Marine Holdings, Inc.

A total of 16 respondents said they appreciate the economic policies presented through the “new form of capitalism,” the flagship policy of the Cabinet led by Prime Minister Fumio Kishida.

“I can appreciate their efforts to rebuild a free, open economic order amid the rapidly changing international situation,” said Hiroshi Shimizu, president of Nippon Life Insurance Co., citing policies related to digitization, support for startups and investment in people, among others.

The government is promoting “relearning” as part of measures to strengthen the development of human resources. Masahiro Kihara, president of Mizuho Financial Group Inc., said, “It’s important that employees choose for themselves about what they learn in connection with their careers.”

Kihara said Mizuho Financial Group holds briefings to introduce employees to career opportunities, in which they can take an active part, in addition to training sessions. Bank of Japan Gov. Haruhiko Kuroda points to a reporter at a press conference in Tokyo in December.
Yomiuri Shimbun file photo