PHNOM PENH – Prime Minister Hun Sen and his Japanese counterpart Fumio Kishida called for the immediate cessation of violence in Myanmar, a stop to the flow of weapons, and for all parties to exercise the utmost restraint.

The call came as Minister of Foreign Affairs and International Cooperation Prak Sokhonn embarked on his first official visit to Myanmar in his capacity as the ASEAN special envoy and met with Senior General Min Aung Hlaing – chairman of the ruling State Administration Council (SAC) – on March 21.

The foreign ministry said on March 18 that the visit would hopefully create favourable conditions leading to the end of violence as well as restraint by all parties. The aim was also to distribute humanitarian assistance with the support and coordination of the AHA Centre, and to encourage political consultation and dialogue.

Prior to the departure of the delegation, Hun Sen and Kishida expressed their concerns about the situation in Myanmar. 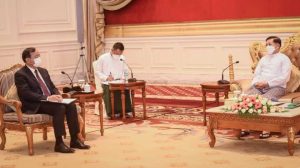 In a joint press statement on March 20 during Kishida’s official visit to Cambodia, both leaders called for the immediate cessation of violence and a stop to the flow of weapons.

They also urged commencement of a process of dialogue towards a peaceful solution, the release of political detainees as well as a return to normalcy and the democratic political system.

“The two prime ministers consented that concrete action is needed to implement the “Five-Point Consensus” reached at the ASEAN Leaders’ Meeting on April 24, 2021.

“Prime Minister Kishida welcomed Cambodia’s active engagement as ASEAN chair to break the deadlock, and expressed hope for a fruitful outcome of Prak Sokhonn’s first visit to Myanmar as the special envoy of the ASEAN chair,” said the statement.

In a press statement released late on March 21 regarding the meeting between Sokhonn and Min Aung Hlaing, the ministry said: “Both sides exchanged views on the progress of the implementation of the ASEAN Five-Point Consensus, following the visit of Prime Minister Hun Sen in early January this year.”