HONG KONG – Australia is grappling with a new wave of COVID-19 infections in its winter season, with case numbers rising due to highly transmissible Omicron variants.

The fresh outbreak is stretching the nation’s hospital system to the breaking point, and employers are struggling to find enough staff to keep their businesses going as people struck down with the virus are forced to stay at home.

Australia reported more than 53,225 new COVID-19 cases on July 24, one of the highest daily numbers since the first wave of Omicron earlier this year, according to the website of its Department of Health. It also reported a record 102 deaths on July 23.

Australia’s Health Minister Mark Butler said earlier in the week that the “real number” of COVID-19 cases in the country is likely to be double the number reported daily.

On July 19, Butler warned that the current third wave of Omicron variant infections is “very significant,” with the number of hospital admissions soaring.

“There were 300,000 cases or thereabouts reported over the last seven days, and I think the chief medical officer and I are pretty confident that the real number is likely to be more than double that,” he told reporters.

“We are seeing hundreds and hundreds of thousands of Australians infected every single week in this wave.”

According to Department of Health data on July 22, there were 5,360 cases being treated in Australian hospitals, including 162 in intensive care. The figure was close to the record high 5,390 cases seen in January during the outbreak driven by the BA.1 variant.

“The other difference obviously between the situation we confront today and in January is that hospitals are also grappling with flu, a range of other respiratory illnesses and the usual surge in hospital activity that we see during winter,” Butler said.

Some health experts have described the high COVID-19 and flu cases at the same time as “twindemic”. 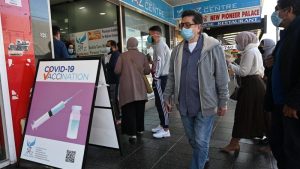 Residents queue up outside a pharmacy for a COVID-19 vaccination in western Sydney, Australia, on July 30, 2021. (SAEED KHAN / AFP)

Australia recently passed the grim milestone of 10,000 COVID deaths and the figure hit 10,968 on July 22, with warnings of a fresh wave of the virus taking hold across the country in the coming months. Of the 10,000 plus deaths, some 7,000 have occurred since the start of the year.

Nigel McMillan, program director of Infectious Diseases and Immunology at Griffith University, said 10,000 deaths from COVID-19 compared with over 6.3 million deaths worldwide “may seem like a small number”.

“But if this current trend continues, COVID will become the second leading cause of death in Australia in 2022, only behind coronary heart disease,” he said.

He noted that the current average of 50 COVID deaths per day is more than twice the daily toll from road traffic accidents.

“We need our public health leaders to rethink the approach to this disease. We need Omicron specific vaccines, wider use of antivirals and we need to wear our masks much more,” he said.

But despite the grim death toll, governments — both state and federal — seem to be reluctant to reintroduce some of the stricter measures used during the early days of the pandemic, such as mandatory wearing of face masks in public places and social distancing.

When former prime minister Scott Morrison announced at the end of last year that the government would drop all restrictions and open Australia’s borders to foreign travelers, he said Australians must learn to live with the virus.

Morrison began to shift the narrative from a government response to the individual, saying, “It is your job to protect yourself and if you don’t, tough luck, you will wear the consequences.”

Ahead of the 2022 general election, the federal government started to ease restrictions along with state governments. But no one was counting on the COVID variants such as Delta, Omicron and the subvariants BA4 and BA5.

In the early stays of the pandemic, Australians largely supported tough government measures but the public mood changed later as restrictions were seen more as a hindrance to personal freedom rather than a health issue.

There was public resentment at health measures being adopted when it appeared the virus had been beaten. This put pressure on state governments towards the end of 2021 to begin rolling back restrictions on social gatherings.

Stephen Duckett, a professor at the School of Population and Global Health at the University of Melbourne, said the public health messaging over the past six months has been woeful.

“There has been little messaging about third and fourth (vaccine) doses, and so we have poor third-dose rates, despite what we now know about vaccine waning. The “Omicron is mild” message has led to a “no worries mate” insouciance among the public,” he noted in an article for the academic web site The Conversation.