TOKYO – A major brewing firm is transforming discarded bread crusts and test-roasted coffee beans into craft beers as part of its upcycling efforts.

Asahi Group Holdings Ltd., headquartered in Sumida Ward, Tokyo, sources the unusual ingredients from local eateries. The beers have been well received by beer buffs for their “authentic” flavors.

The company’s aim is to create products from foods that would otherwise go to waste.

“It’s so exciting to see these ingredients recast as beer,” said 58-year-old Kazuko Fukuchi, who owns the Marcelino Mori sandwich shop in Taito Ward, Tokyo, in late May. 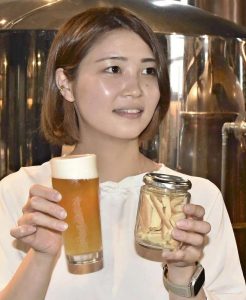 The shop accumulates about 20 kilograms of bread crusts each week while making sandwiches. Previously, the shop would throw most of the crusts away, but now Asahi Group Holdings utilizes them to make Kuramae White, a craft beer sold at its subsidiary stores and other locations.

The Asahi Group became involved in March last year when Reiko Shiraha, owner of the En no Ki coffee bean shop in Taito Ward, expressed an interest in working with the firm on an upcycling project.

During the development process, the group became interested in creating a different beer using bread crusts, leading Shiraha to introduce her acquaintance Fukuchi.

The Asahi Group’s efforts are also playing a role in the creation of local jobs. Coffee beans and bread crusts are collected and dried for brewing by users of a local facility for people with learning difficulties.

“By having the bread crusts collected, I was connected to other people. I enjoy doing this upcycling project with others,” Fukuchi said.

Marina Komuro of Asahi Group subsidiary Asahi You.Us. Ltd., who was involved in the beers’ development, said: “We want to avoid waste and promote upcycling. Our beers not only taste good, they help out other people.”