This prospect will be fueled by the huge domestic market, consistent input into research and development and the determination to achieve breakthroughs in core technologies, they said.

Amid a harsher external environment, including increasingly tightened export controls of chips to China by the United States, more efforts will be made to encourage domestic chip manufacturers to overcome technological hurdles while deepening cooperation with other countries, according to the industry observers.

As Microsoft co-founder Bill Gates predicted, Washington’s restrictions have not only cost highly paid jobs in the US, but also spurred efforts by China to pursue self-sufficiency in crucial semiconductor technologies.

Shi Hongxiu, a professor of economics at the National Academy of Governance, said, “China can take full advantage of its super large market, which means the country has sufficient testing scenarios to verify its self-innovated technologies, lower its R&D costs, and escalate the pace of product output.”

As the world’s largest chip market, the Chinese mainland accounts more than half the world’s semiconductors, which are then assembled into tech products to be re-exported or sold in the domestic market, according to the research company Daxue Consulting.

Shi said, “Greater importance should be attached to creating an ecosystem for innovation, instead of just focusing on one specific technological breakthrough.

“As long as we have the right channels to keep abreast of the world’s leading technologies and cutting-edge knowledge, along with mutual learning among different populations, we will have numerous opportunities,” he added.

Last month’s tone-setting Central Economic Work Conference called for breakthroughs to be made in core technologies and also stressed the need to accelerate R&D and the application of cutting-edge technologies.

Wei Jianguo, a former vice-minister of commerce and vice-chairman of the China Center for International Economic Exchanges, said the conference again highlighted China’s determination to focus on strategically important sectors such as semiconductors.

“The chip industry is known for being highly intensive in capital, talent and technology. These three factors are all needed to ensure its healthy development. We have to beef up our indigenous R&D push,” Wei said.

One of the ministry’s top priorities during the 14th Five-Year Plan (2021-25) period is to advance the modernization of industrial chains and encourage companies to develop core technologies such as high-end semiconductor equipment.

Local governments in areas such as Shanghai, Tianjin, and Guangdong and Zhejiang provinces have identified integrated circuits as one of their key industries during the 14th Five-Year Plan.

Last year, sales revenue in the Chinese chip design sector reached 534.57 billion yuan ($78.17 billion), up by 16.5 percent year-on-year and showcasing sectoral resilience amid US export restrictions, according to preliminary data from the China Semiconductor Industry Association, or CSIA.

The data proved what Gates predicted earlier. In an interview with Bloomberg in September 2020, he said that by forcing China to make its own chips, the US would not only give up highly paid jobs but would also force China to become self-sufficient. Wei Shaojun, president of the CSIA’s integrated circuit design branch, said that faced with Washington’s restrictions, “not only Chinese companies but those from overseas operating in China are attaching greater importance to the security of supply chains, fueling the wider use of domestically designed chips”.

Toshiya Hari, lead analyst covering the semiconductor industry at investment bank Goldman Sachs, estimated that US export controls of high-end chipmaking equipment to China could have cost the world’s toolmakers $6 billion in lost revenue last year, or 9 percent of their projected sales.

Experts said such restrictions create a sense of crisis among downstream users of chips. As a result, they seek secure supply chains less reliant on US chip technologies and products, thus opening up more opportunities for Chinese chip designers.

Wei, from the CSIA, said, “Many domestic chip design companies said last year they were granted access to some markets that they found difficult to enter in the past.”

Huang Qing, managing partner at Walden International, a US venture capital company focusing on cross-border investments, said that as the US tightens control of key technologies, including premium processors, China has an opportunity to build up its semiconductor capabilities.

He added that although it lags behind some developed countries in terms of basic semiconductor materials, high-end chip-making equipment and chip design tools, China is home to leading global companies that integrate software and hardware in mobile phones, 5G communications, security equipment, new energy vehicles, and other areas. These companies traditionally tend to cooperate with suppliers in Europe and the US. 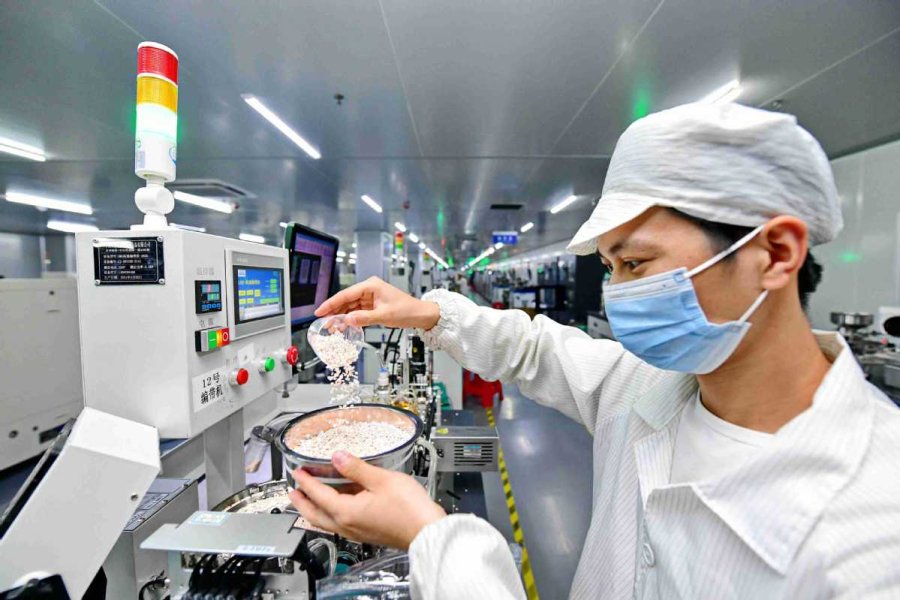 “But faced with widened restrictions by the US, they feel an urgent need to work with Chinese semiconductor companies. By serving such tech heavyweights, Chinese chip companies have the chance to become global players,” Huang said.

He added that in 2021 alone, the mainland imported chips worth more than $400 billion.

John Lee, a consultant for International Institute for Strategic Studies, a British think tank, said, “China is becoming a major player in the globalized chip value chain, a trend that US-led efforts are unlikely to derail.”

According to the CSIA, sales revenue for China’s integrated circuit industry exceeded 1 trillion yuan for the first time in 2021, with year-on-year growth of 18 percent. In 2017, the industry’s sales revenue stood at about 540 billion yuan.

For the first time, three mainland chipmakers accounted for more than 10 percent of the global foundry revenue in the first quarter of last year, according to Trend-Force, a market research and intelligence provider. Foundry is industry parlance for contract chip manufacturing.

According to data compiled by Bloomberg in June, Chinese chip companies are also growing faster. In the past four quarters, 19 of the world’s 20 fastest-growing chip industry companies were based in China, compared with just eight the previous year.

In addition, more promising startups are emerging. As of November, there were 50 semiconductor unicorns, or startups worth more than $1 billion, in China. Their total valuation was 858.4 billion yuan, according to New Fortune, a financial services platform.

Unicorns have also emerged in semiconductor materials, chipmaking equipment and electronically designed automation tools, with the aim of narrowing the gap between China and the US in these areas, New Fortune added. One of the promising startups is Horizon Robotics, the first Chinese company to commercialize self-designed processors for autonomous driving. Yu Kai, the company’s CEO, said smart electric vehicles are a unique opportunity for China to develop its artificial intelligence chips.

“China is now the world’s most vibrant market for smart electric vehicles, and the most competitive arena for global tech companies focused on intelligent driving. We believe China will also become a major source of innovation for the smart EV industry,” Yu said.

In October, Volkswagen said it would spend 2.4 billion euros ($2.55 billion), its largest single investment in China, to jointly develop driving-assist functions with Horizon Robotics for its electric vehicles. The investment includes setting up a joint venture.

Wang Changlin, head of the Academy of Macroeconomic Research in Beijing, which is part of the National Development and Reform Commission, the country’s top economic planner, said international competition will intensify, as there will be overcapacity in global chips for the next few years.

According to a forecast by World Semiconductor Trade Statistics, the global semiconductor market is forecast to decline by 4.1 percent this year to $557 billion — the first annual contraction since 2019.The decline is attributed to a number of factors, including rising inflation and weak consumer markets that hurt chip sales.

“In the future, China’s chip industry is likely to face more restrictions, so we have to make substantive breakthroughs in crucial technologies,” Wang Changlin said.

Sun Yingtong, chairman of Chinese chip company Nationz Technologies, said, “We don’t have enough people — not just those who excel in semiconductor technologies, but also those who have an innovative mind and are willing to spend years on R&D.” Visitors to a car fair in Haikou, Hainan province, are attracted by chips made for vehicles. CHEN XIAOGEN/FOR CHINA DAILY

CCID Consulting, which is based in Beijing, said that by next year there will be a talent shortfall of 220,000 people in China’s semiconductor industry.

Sensing this shortage, the Ministry of Industry and Information Technology published a guideline in October calling for more efforts to cultivate top-quality engineers.

Roger Sheng, vice-president of research at global consultancy Gartner, said the industry still faces huge challenges, as it takes a long time to complete the trial-and-error process needed to select talent, which is especially important in the chip sector. This protracted procedure calls for long-term, consistent input, he said.

It takes more than just money to achieve breakthroughs in crucial areas, Sheng said, adding, “Talent and time are key.”

Zhong Xinlong, a senior consultant at the China Center for Information Industry Development Consultancy, said that due to the restrictions imposed by the US, it is vitally important to strengthen international cooperation on semiconductors with European nations and countries such as South Korea.

“Openness is the soul of the semiconductor industry. Despite the sophisticated international situation, we still need to have an open and inclusive mindset,” Zhong said.

Well aware of China’s large market, foreign chip companies, including those from the US, are committed to establishing deep bonds with local businesses.

The Semiconductor Industry Association, a group based in Washington that represents this industry in the US, said in a report, “Access to this massive market is essential for the success of any globally competitive chip firm today and in the future.”

Frank Meng, chairman of Qualcomm China, said, “We are now more confident than ever that there is an even more room for cooperation between Qualcomm and China’s industry partners.”

Shen Bo, senior vice-president at Dutch chip-making equipment company ASML, said it would continue to openly support and focus on the Chinese market.

A worker displays chips made for remote sensors at a factory in Bengbu, Anhui province. DU YU/XINHUA