TOKYO – Taiwan has lifted an import ban on food from Fukushima and four other prefectures, imposed in the wake of the 2011 accident at the Fukushima No.1 nuclear power plant.

Taiwan was once a major trading partner for Fukushima, accounting for nearly 80% of the prefecture’s agricultural exports. The ban was lifted Feb. 21, though a few products, including mushrooms, remain embargoed.

Food producers have welcomed the news and are keen to regain a slice of the Taiwan market and expand their sales channels.

“Once again, we can let the people of Taiwan know about Fukushima’s delicious rice,” said Osamu Watanabe, 49, president of Nakamura Nojo farm, which grows Koshihikari rice in Aizubange in the prefecture. The farm began exporting rice in 2009, but was obliged to stop doing so after the nuclear accident.

Thanks to efforts to dispel misgivings following the disaster, domestic trade gradually recovered. But rice prices have fallen amid the rise of the novel coronavirus, spurred by a decline in rice consumption as people dine out less frequently. In light of these difficult circumstances, news of the resumption of exports has been greeted with delight in Fukushima, as well as the four other affected prefectures: Ibaraki, Chiba, Tochigi and Gunma.

Following the accident at the plant operated by Tokyo Electric Power Company Holdings, Inc., 55 countries and regions slapped restrictions on the import of foods from the prefecture. To help convey the safety of the prefecture’s agricultural products, the Fukushima governor and other prefectural officials conducted a PR drive that included holding an overseas tasting event.

Partly helped by political considerations surrounding the Comprehensive and Progressive Agreement for Trans-Pacific Partnership, 41 countries and regions have so far lifted import restrictions on food products from Fukushima.

Last May, the prefectural government launched a “prefectural food-export coordinator” initiative, entrusting the expansion of sales channels and other operations to private businesses. Earlier this year, Anpogaki dried persimmons, a specialty of the prefecture, were exported for the first time to Dubai. 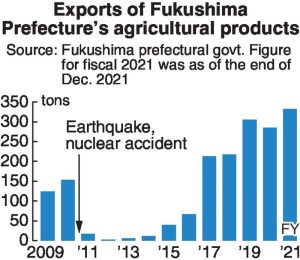 As of the end of December of the fiscal year that ends in March, the prefecture had exported a record 332 tons of agricultural products, more than double the 152 tons exported in fiscal 2010.

Expectations are running high within the local agricultural industry following Taiwan’s move, not least because Taiwan was once Fukushima’s largest trading partner — prior to the 2011 calamity, the prefecture exported dozens of tons of peaches, apples and other fruits to Taiwan each year.

Yoshio Hishinuma, a 62-year-old peach farmer in Fukushima City, said he was encouraged by the development.

Social conditions have changed since the accident, and it remains to be seen whether prefectural products will sell in Taiwan as they did before. Japan External Trade Organization (JETRO) Fukushima is currently coordinating with companies in the prefecture with an eye to exhibiting their products at Taiwan’s largest food fair, scheduled for late June.

“We’ll do our utmost to explain about the charms and safety of the prefecture’s products,” said Yugo Yoshida, 44, director of JETRO Fukushima. “I hope the goods’ reputation will spread from Taiwan to wider Chinese communities.”