BEIJING – Seeing these “gardens” is akin to looking at a universe in a plant pot.

The miniature pruned branches spread and twist, artistically demonstrating the vitality of nature, allowing the viewer to stop and meditate upon the circle of life. The potted landscape of penjing, also known overseas as bonsai, is a signature of top-tier garden art in Suzhou, Jiangsu province.

Since Wanjing Shanzhuang (“a mountain resort of thousands of scenes”) was opened in the ruins of an ancient temple by the Tiger Hill in 1982, Tan Qiuyi has taken care of these exquisitely designed tray plants.

Over 600 penjing artworks are now showcased in the site, the largest hub of the graceful horticulture art form in Suzhou, a city known for its classical gardens.

After working for four decades, Tan is now a leading horticulturist. Reviewing the years spent with these plants, which grow extremely slowly, the 59-year-old jokes that he hardly notices the fleeting passage of time.

“If you’re patient, nature will give you a wonder,” he says. “It takes years to create the perfect planting.”

Each penjing needs to be watered twice a day to keep the ideal moisture. Sometimes the work gives Tan a sense of duality. On one hand, he busily trims the branches to convey elegance and beauty as if he were an artist. On the other hand, physical work－like making the smelly organic fertilizer－makes him feel like a farm hand. 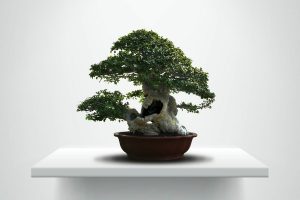 “No matter what I am, it’s a duty to pass down a key component of our traditional culture,” Tan says, smiling.

The Suzhou-style penjing cultivation technique was listed as a national-level intangible cultural heritage in 2011.

“Without penjing, Suzhou gardens wouldn’t be as charming as they are today,” he says. “Once construction of a garden is completed, its buildings, rockeries and waterscapes are set, but planting (one of four key elements of Suzhou classical gardens) can grow and change.

“That makes gardens lively,” he adds. “More importantly, no matter how small a piece of penjing is, it has almost all the features of a life-size Suzhou garden.”

The history of penjing can be traced back to the Tang Dynasty (618-907), according to Tan, when the great poet Bai Juyi, once serving as an official in Suzhou, used some stones to create miniature landscapes in pots. Fan Chengda, a local Song Dynasty (960-1279) poet had already made Suzhou penjing famous, creating them to mimic mountains and rivers.

Because of that long history, Suzhou-style penjing is often seen as a fundamental school of Chinese tray planting art, which later greatly influenced its counterparts in Japan, on the Korean Peninsula and in Vietnam.

“Reviewing its origin, you can see how closely Suzhou penjing was connected with the aesthetics of the Chinese literati,” Tan says. “Their refined artistic taste has dominated the guiding ideas for designing patterns of such plantings.” The Ming Dynasty (1368-1644) marked a boom in the urban economy of Suzhou, a period that also turned the city into a major cultural center. Printing houses and painting studios blossomed, which raised the curtain on golden age of literati painting－an artistic school that aimed to reveal the painters’ self-cultivation and morals rather than focusing on showing artistic skill through the accurate depiction of details.

“That tradition of abstract expression also defined what Suzhou-style penjing has looked like,” Tan explains. “We prefer an image that doesn’t look ‘too full’. So, in designing a penjing work, we tend to leave some blank areas that provide space for viewers to imagine. A few slim, simply placed branches can inspire people to think of a bigger picture, just like in a Chinese ink painting.”

In Tan’s eyes, that unadorned yet tasteful style is also the best way to pay homage to nature.

Nevertheless, as a horticulturist, he also understands it is against the nature to prune branches of the plants just for people’s tastes. Consequently, a penjing work will be moved out of Wanjing Shanzhuang after being publicly showcased and continuously pruned for five to eight years. In the cultivation base, it can enjoy a break of around three years to freely grow.

“It is to respect life,” Tan says.

In recent years, Suzhou has nurtured some entrepreneurs who, as fans of penjing, have contributed to the revitalization of horticultural art. They introduced new styles and techniques, not only from the rest of China, but also from Japanese bonsai.

Tan considers it to be important for cultivators to breed new varieties of penjing.

“Penjing works are beautiful, but people have a stereotype that they were owned by the rich and we can only admire them as art,” he says.

“However, only when they are embraced by young people and general consumers, can they benefit from being part of people’s wider modern aesthetic taste. After all, it’s a Suzhou garden that they can take home.”