HONG KONG – Japan has eased flight curbs to allow passenger flights from Hong Kong to land at three more airports, raising the number to seven, provided that passengers have not been to the Chinese mainland in seven days prior to their flights, the special administrative region’s government said on Thursday.

The three airports are: New Chitose Airport, Fukuoka Airport, and Naha Airport, the HKSAR government said referring to an announcement by the Japanese government the same day.

“The relevant arrangement is only applicable to passenger flights to Japan from Hong Kong and Macao. The HKSAR government considers that the restriction on flights departing from Hong Kong is unreasonable,” the government said in a statement, adding that it had been “proactively liaising with the Japanese authorities and seriously requesting the Japanese authorities to rescind the restrictions concerned.”

Japan, which is a top travel destination for the city’s residents, said earlier on Wednesday that it would limit flights from the mainland, the Hong Kong Special Administrative Region and the Macao SAR from Friday to Tokyo’s Narita Airport and Haneda Airport, plus Osaka’s Kansai Airport and Nagoya’s Chubu Airport.

The city’s government said late on Wednesday that it had asked Japan to withdraw the flight restriction, saying the decision will impact around 60,000 passengers.

Japan’s decision came during a peak travel season and ahead of the Lunar New Year holiday which begins Jan 22.

“It is understood that around 250 outbound flights of Hong Kong airlines will be affected between December 30, 2022 and the end of January 2023, affecting around 60,000 passengers,” a spokesperson for the government said.

“The HKSAR government is following up on the incident on multiple fronts to ensure the smooth return of Hong Kong people from Japan and to minimize the impact to Hong Kong travelers caused by the incident,” the spokesperson said.

The government had convened an urgent video conference with the representatives of the Japanese authority and had been in close communication with the affected local airlines, said the spokesperson.

Chief Executive John Lee Ka-chiu said the government had indicated to the Japanese government it was disappointed.

“We think that Hong Kong people should be allowed to use not just these four airports,” Lee said.

Flights of Hong Kong airlines can still carry passengers back to Hong Kong from various airports in Japan, the spokesperson said, to “ensure the smooth return of Hong Kong people from Japan and to minimize the impact to Hong Kong travelers caused by the incident.”

Hong Kong’s flagship carrier Cathay Pacific Airways said in a statement on Thursday it would continue to operate flights to Japan, including Tokyo (Narita and Haneda), Osaka, Nagoya, Fukuoka and Sapporo, adding that customers who have booked flights to Fukuoka and Sapporo from Dec 30 onwards must declare that they have not been to the mainland within the seven days prior to their departure.

But Cathay Pacific noted it would reduce the number of flights to 65 per week, down 20 percent from its planned schedule for Jan 2023. 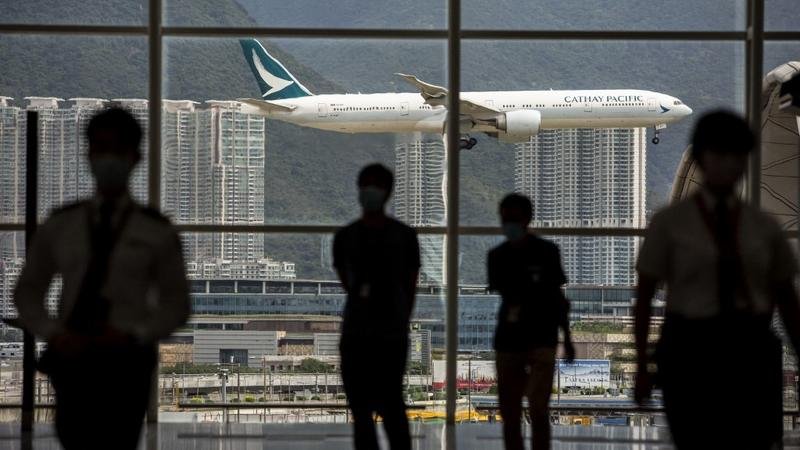 For flights from Hong Kong to Japan, the airline will operate a reduced flight schedule from Dec 30 until further notice. All flights to Nagoya and Fukuoka will be canceled, while flights to Sapporo will be reduced from 7 to 5 per week with Monday and Wednesday flights canceled. Flights to Tokyo’s Narita and Osaka will be canceled on select dates.

For those from Japan to Hong Kong, the company will operate all scheduled flights as planned from Dec 30 to Jan 8, including ferry flights carrying no passengers to Japan to help customers return to the city.

Customers for Fukuoka will be offered a full refund as the remaining Japan flights are fully booked due to the peak holiday period, the airline added.

Meanwwhile, HK Express, which is owned by Cathay, said in a separate statement it would only be able to operate 60 scheduled flights per week to destinations in Japan due to the restrictions, prompting the cancellation of 41 flights from Hong Kong to Japan in January 2023.

Hong Kong Airlines and Peach Aviation announced they would cancel some flight routes because of the rules.

“The Transport and Logistics Bureau, the Immigration Department, the Hong Kong Economic and Trade Office in Tokyo, the Tourism Commission, the Travel Industry Authority and the airlines will maintain close contact to keep abreast of the latest situation and will provide appropriate and feasible assistance to Hong Kong residents in need,” the spokesperson said.