PHNOM PENH – A former cowherd from Kampong Chhnang province attracted public attention recently when he posted several pictures of himself with US President Joe Biden and his grandmother at his recent graduation ceremony from the US Naval Academy at Annapolis, Maryland – in part due to the cow leash and krama his grandmother had given him as a symbolic graduation gift.

Pich Chantrea, known as Moon Pich to friends and on social media, worked hard at pursuing his studies while in Cambodia before his admission to the US naval academy.

An education at Annapolis cannot be purchased. All those who attend the academy are there on scholarships that cover 100 per cent of the costs, which guarantees that all attendees are admitted due to their outstanding merits in order to train them to be future commanders of naval vessels or admirals in charge of entire regions or navies.

The “cow leash and old krama” handed to him by his grandmother, Sao Yi, was brought over from Kampong Chhnang province specifically for the occasion.

His achievement attracted the public’s attention in Cambodia, including Prime Minister Hun Sen’s. The premier said that Chantrea, which translates to moon in English, earned his diploma through hard work and deserved the attention he was getting for his outstanding effort, and that he hoped the graduation ceremony would be a great memory for him.

“She [Chantrea’s grandmother] did this as a reminder to her grandchild to never forget the tough times he lived through or where he came from. I would also like to wish you happiness and prosperity,” Hun Sen posted in a comment on Chantrea’s Facebook post about his May 27 graduation ceremony.

Chantrea said he had his grandmother hold on to the krama and cow leash for the past 10 years, telling her to look at them when she missed him and to return them to him on the day he graduated.

While presenting the krama and leash as gifts at his graduation, Yi said she held on to them over the years to remind her of the much-loved grandchild.

“But now I give them to my grandchild to remind him that no matter where you go, don’t forget where you came from or the time you spent as a cowherd,” he quoted his grandmother as saying.

Chantrea said he found the gesture and gift quite profound and moving and nearly lost his composure.

“I almost shed tears hearing the person who took care of me from birth until I grew into an adult saying those words. It’s the most precious gift I’ve ever gotten in my whole life. Thank you, my dear and beloved grandmother,” he wrote in his Facebook post. 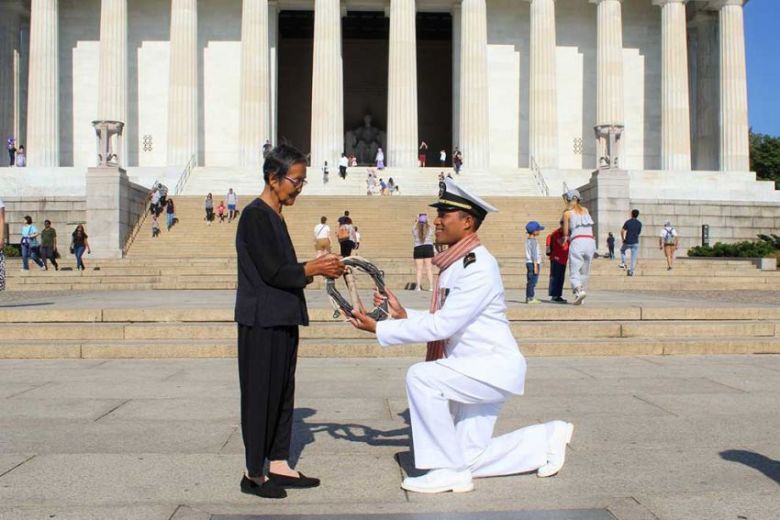 Moon Pich poses for a photo with his grandmother as she hands him his cow leash and krama. MOON PICH VIA FACEBOOK

Chantrea’s posts and pictures went viral on social media and the public celebrated his accomplishments and the touching gesture by his grandmother.

After the public outpouring of congratulations and kind words for him and his family, Chantrea made a public statement of thanks.

“It is my great honour and my family’s honour to receive all of this love from brothers, sisters, uncles, aunts, grandmothers and grandfathers who are fellow Cambodians. I wish I had more than just the 10 fingers on my hands to shake all of yours with to thank you for this precious spirit of support. Thank you. I also apologise for not responding more quickly, my grandmother is not feeling well after the long journey from Cambodia to the US,” he wrote.

According to Chantrea, when he was as child, he loved reading books and that’s how he would pass his time while herding cows in the fields near his home village of Phum Krous in Kampong Chhnang province’s Rolea Bier district. Phum Krous is in a remote rural area and the people there are generally very poor.

Chantrea said his grandmother only earned 2,000 riel per day ($0.50) and that he had to save up for months to buy one book, which cost him $2 each.

When he was in elementary school, he read a book about World War II that described Admiral Chester W Nimitz, who graduated from the US Naval Academy in 1905. During World War II, Nimitz was given command over all US forces in the Pacific after Japan attacked America at Pearl Harbor on December 7, 1941, and he remained in command until he signed the documents accepting Japan’s formal surrender on board the USS Missouri in Tokyo Bay on September 2, 1945.

“It was then that I began to dream big. I wanted to study at the academy that graduated such a great leader,” Pich wrote.

Pich had no idea how he could ever make his dreams come true, but he did understand at least one thing about finding success in life even at a young age.

“On the road to success you won’t find even one footstep from a lazy person” was the message he wrote on a beam in his house to motivate him in his studies.

“I wrote that as a reminder to never give up on my dreams. Every day before bicycling 16 miles [25km] to school from home, I always looked at those words and told myself ‘I can do it’,” he said.

After receiving a scholarship to study at a medical school in Phnom Penh, Moon had to leave the village and live in the city where he did not know anyone. The scholarship only covered his tuition so he was forced to sleep on the streets at night and then go to class during the day. 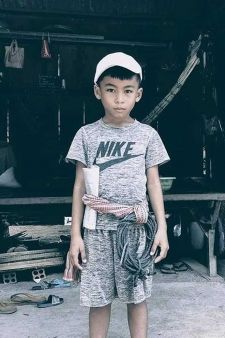 Moon Pich as a young cowherd with leash and krama. Moon Pich via FB

“One night, because I had no money – I had no food to eat. I was searching through some rubbish, hoping to find some leftover food. However, I found something better than food and it really changed my life. It was a newspaper article about how the US embassy was offering a scholarship to the US Naval Academy and I realised that this was my chance to make my dream come true,” Chantrea said.

A decade later, while in his junior year at the US Naval Academy, he was appointed squad leader and placed in charge of a group of fellow midshipmen, a position of authority that the academy only gives to those it has the most trust and confidence in.

However, Chantrea remains modest and still remembers that he was just an ordinary young man born in an impoverished farming family and raised by his grandmother.

“You may be smarter, stronger and more capable than me, but my dream has come true because I remembered that there are no lazy people allowed on the road to success. I see challenges as an opportunity to learn and grow and I don’t give up the ship,” he wrote, referencing a famous exhortation from a commander to his ship’s crew in the war of 1812 that as a slogan today means never give up, never quit and keep fighting towards your goals.

Pich Rithy, 41, Chantrea’s biological older brother, said Chantrea was very diligent in his studies and in his work since childhood and it was true that he would never give up in the face of adversity.

“I truly appreciate my younger brother’s willpower. He never complained to our parents or grandmother or his siblings about his difficulties. He hid all his distress and tried to solve those problems for himself from an early age,” Rithy said.

He added that he recalls seeing the words Chantrea wrote on the beam in his grandmother’s house and not understanding a word of it since he didn’t know English and being surprised that his younger brother actually knew enough to understand and write it.

According to Rithy, due to difficult situation in his family, he and his sister Pich Samphors had to drop out of school in the 10th grade and take jobs working in construction and a garment factory to help support his parents and siblings, including Chantrea.

“Chantrea is the only one of my seven siblings whose fate is better than mine,” Rithy said.

He said Chantrea’s persistence and intelligence was noted by the people around him, including friends, teachers and the pastors at a Lutheran Church in the area and that all of them tried to help or encourage him however they could so that he could achieve his dreams.

Meas Hong, Phum Krous village chief, said he knows Chantrea’s parents and family well. He told The Post that Chantrea was a role model both in his youth and now who fought very hard his whole life to succeed in his education and work.

“Since childhood, Chantrea only lived with his grandmother, Sao Yi, in order to lessen the burden of caring for all of the children under one roof due to the family’s poverty,” said Hong.

According to Hong, Chantrea’s father actually attended military courses in Russia in 1983 and after returning from Russia he enlisted with the Cambodian Navy at the Ream Naval Base in Preah Sihanouk province, and that Chantrea’s success means that naval service could now become something of a family tradition for them if it continues.