HANOI – In an online cooking group where more than 2 million people learn to make better meals for their families, a popular home chef from Hải Phòng City, who usually posts celebration meals she cooks for important events, had to remove a recent recipe.

It had wild birds on the menu and within 24 hours of posting the pictures, she removed them after being publically chided by members of the public clearly telling her she should not be using or catching wild birds for food.

Birds are friends, not food

“Two days ago, I posted a dish I cooked with a bird that was given to us as a gift, and I recklessly posted it in our group,” read her new post. “I have deleted the post and apologised for my mistakes and lack of understanding. Please enjoy my latest flower arrangements, my sincere effort to make me a better self every day!”

Her resolution came as other group members raised their voices on the matter, saying you do not need to consume wild birds to survive. BIRDS OF A FEATHER: From September until the following April, Việt Nam serves as a stop-over for migrating birds that come south in their annual travel cycle. VNA/VNS Photo Minh Đức

Today, Việt Nam has become the world’s second-biggest rice exporter. It has become self-sufficient in food, and there’s no excuse for killing wild birds or animals for food.

Spreading this message in community groups where displaying daily meals is a real achievement is an effective approach.

However, the group pressure may only work on the surface. In public home-makers may reject such exotic foods, but in private it may be an entirely different story.

A quick browse of the internet serves as something of a reality check. There are many restaurants still serving wild birds, whether it is roasted sparrow or wild duck stew. A full-scale, concerted network has got eight relevant ministries, National Television, National Radio and all provincial People’s Committees on the same page working under the directive.

The Ministry of Natural Resources and Environment has proposed protection regulations on wild and migrating birds, and guidelines to manage and protect living habitats, trans-border migrating lines and stop-overs, especially between September and the following April, which is the avian migrating season.

The Ministry of Agriculture and Rural Development will assign forest rangers and local authorities to patrol, control, prevent and punish illegal hunting and capturing of migrating birds. It will also propose appropriate fines and punishment for acts of hunting, shooting and trapping wild and migrating birds, as well as monitor any possible diseases from wild birds that could be transmitted to the human population. The Ministry of Public Security was assigned to authorise environmental police to strengthen measures to handle violations of legal regulations. It’s responsible for investigating, detecting and handling violations, cracking down on trans-border illegal lines for purchasing/selling, storing and trafficking wild and migrating birds.

The trade department is in charge of any activities relating to managing commercial use, transport, storing and consumption of illegal birds for food. It will investigate all advertising measures, online trading of wild birds, and tools for trapping and catching birds with net, traps, and fragments to assemble self-made rifles or shooting guns.

The Ministry of Defence plans to strengthen its control of all border checkpoints to detect, arrest and handle all illegal trading of wild birds.

Navigating and mapping the routes of migrating birds in coordination with other countries under the birds’ migrating lines will be handled by the Ministry of Science and Technology.

Last but not least, the Ministry of Information and Communication, National Television and National Radio will make public awareness a key responsibility. Making the wider public aware of the need not to hunt birds for food or export them for profit will be critical.

The incident of the home chef’s apology came well before the new government directive, and there is a broad public consensus on the issue. 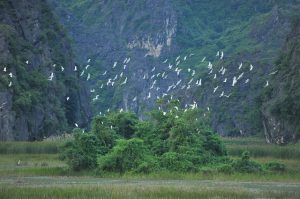 HOME TIME: In the evening, thousands of birds fly back to Vân Long Swamp in Ninh Bình, which draws a large number of tourists. VNA/VNS Photo Minh Đức

In Việt Nam, it’s illegal to own weapons. Only legally authorised personnel can be assigned firearms in specific job roles.

Owning weapons that can damage human lives is against the law. Even hunting guns or rifles cannot be freely assembled or used, including flintlocks, air guns and their ammunition.

It’s against the law for any person to own weapons, explosive materials, or supporting tools, except for primitive weapons for exhibitions, display or those inherited from ancestors.

If anyone purchases them, they shall be fined by law.

The illegal weapons will be confiscated, the person can be detained, and they can get an administrative fine, ranging from between VNĐ10 million to VNĐ50 million (US$2,200). Criminal charges may also be brought.

In short, owning weapons has been ruled out, so in Việt Nam, you cannot go on hunting trips as in the past, or in the US and Africa.

Free as the birds

If a wild bird lives freely in nature, and one day it becomes a trophy or lands on a plate, it is a human crime.

To sow any seeds of love in our children’s future, it’s essential to spread the message among the wider public, critical public opinion leaders and, of course, home-makers, who not only cook food for their families but also teach their children important life lessons.

Our country lies along some of the essential itineraries of a wonderful array of migrating birds, and to complete the circle of life, we need to make a home for the birds that come to us as a stop-over in their life-long travel cycles.

Việt Nam has several bird sanctuaries recognised by UNESCO, and it’s important to enlarge them and increase the birds’ population for our common future to create a more diverse habitat in the country and beyond.

Our feathered friends are to be marvelled at and they deserve to be protected.