The series was nominated in four categories.

Two actors — Jung Ho-yeon and Lee Jung-jae — won awards for their roles. This marked the second consecutive year of Korean actors winning at least one SAG award. Last year, veteran actor Youn Yuh-jung won for her role as a feisty grandmother in the film “Minari.”

Jung, who played Sae-byeok, a North Korean defector who participates in the bloody survival game to win 45.6 billion won ($38.9 million) in the Netflix series, won the award for outstanding performance by a female actor in a drama series. The series marked her debut as an actor. She is better known in Korea as a model.

At the awards ceremony, Jung began her acceptance speech in Korean, expressing gratitude toward other actors at the event, adding that she was honored to be there with people she looks up to. Then she started speaking in English with tears in her eyes.

“Thank you make me dream and open the door for me. And I love you ‘Squid Game’ crew,” Jung said in her acceptance speech.

Jung was nominated in the category alongside Jennifer Aniston for “The Morning Show,” Elisabeth Moss of “The Handmaid‘s Tale,” Sarah Snook of “Succession” and Reese Witherspoon of “The Morning Show.” 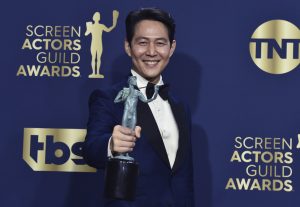 Lee Jung-jae, winner of the award for outstanding performance by a male actor in a drama series for “Squid Game,” poses in the press room at the 28th annual Screen Actors Guild Awards in Santa Monica, California, Sunday. (AP-Yonhap)

Top star Lee, who played Gi-hun, a down-on-his-luck middle-aged man who also takes part in the deadly “Squid Game,” was named the winner for outstanding performance by a male actor in a drama series.

“Oh my, thank you so much. This is truly huge,” Lee said during his acceptance speech in Korean. “Thank you SAG Awards. And thank you to the global audience for all of your love for ‘Squid Game.’”

The outstanding action performance by a stunt ensemble in a comedy or drama series prize also went to “Squid Game” on Monday. Other works that were nominated in the category were “Cobra Kai,” “The Falcon and the Winter Soldier,” “Loki” and “Mare of Easttown.”

The Korean drama series was also listed for outstanding performance by an ensemble in a drama series, but “Succession” took home that prize.

Director Hwang Dong-hyuk’s “Squid Game” is a story about hundreds of cash-strapped players who risk their lives to compete in children’s games where the final winner gets 45.6 billion won.

Following its release in September, it quickly became the most-watched Netflix show of all time, reaching the No. 1 spot on the show charts of 94 countries.

The “Squid Game” team also won multiple awards at other US awards events.

In January, veteran actor Oh Young-soo, who portrayed player No. 1 in “Squid Game,” took home the best performance by a supporting actor in a series, limited series, or television movie trophy at the 79th Golden Globe Awards. 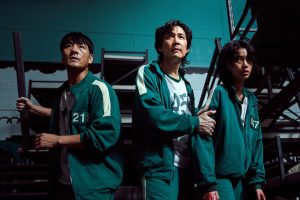 In November, the show won the breakthrough series long format category at the 2021 Gotham Awards.

Also, the American Film Institute selected “Squid Game” as one of the three winners of a special honor in December 2021. “Belfast” and “Summer of Soul” were also recognized as “works of excellence that fall outside of the Institute’s criteria of American film and television” along with “Squid Game.”