SEOUL – From their bloody makeup to bone-breaking motions, the zombies in Korean films and drama series have been satisfying viewers’ lust for the zombie apocalypse.

But zombies were never the favored choice for films and drama series at first, as local horror fans were much more drawn to evil-possessed characters or ghosts.

However, the spine-tingling zombies in horror-thriller “Train to Busan” (2016) and Netflix’s “Kingdom” (2019) have changed all that, with the Korean zombies’ unique actions and movements mesmerizing both the local and global audiences.

Korean zombies made their screen debut in the horror film “A Monstrous Corpse” (1981), born from the malfunctioning of a low frequency transmitter.

Though it was identified as a zombie, its actions were more akin to those of Dracula, biting other humans and sucking blood. The public broadcaster KBS featured zombies in an episode of “Hometown Legends” (1983), a classic drama series of various ghost stories. The zombie‘s well-known characteristics — devoid of will, speechless reanimated dead — were largely ignored here, the undead terrifying the viewers by screaming its famous line “Give me back my leg!”

‘Train to Busan’ a turning point

“Train to Busan” wrote a new history in Korean cinema by becoming the first zombie film to record more than 10 million tickets sold, which is considered a huge box-office success in the country with a population of about 52 million. The story about the origin of a zombie virus aside, “Train to Busan” captivated audiences with mind blowing gestures of countless zombies, something that the local audiences expected to see only in Hollywood blockbusters like “World War Z” (2013).

“The zombie gestures were created after carefully studying the movements of animals with rabies and the humanoids’ gestures in the Japanese cyberpunk film ‘Ghost in the Shell 2: Innocence’ (2004),” movement director and choreographer Jeon Young, who brought the undead to life in “Train to Busan,” told The Korea Herald on Wednesday.

“One of the stunning characteristics of the ‘Train to Busan’ zombies is that their eyes and faces are fixed at their target, even when they crash into structures and obstacles. This feature referenced the undead in the action role-playing game ‘Dark Soul,’” Jeon said.

While Jeon believes that the human movements tend to have a certain rhythm, pattern and flow, Jeon and his dance team specialized in bone breaking moves, a street dance genre widely known as flexing, which break these rhythms in an unorthodox manner.

“The moves from flexing helped to create mesmerizing zombie transformation with muscle twisting and bone breaking actions,” the choreographer said. According to Jeon, zombies evolved as he worked on various projects — “Kingdom” series, “Peninsula,” “The Cursed: Dead Man’s Prey” (2020) and tvN’s drama “Happiness” (2021), after “Train to Busan,” developing the actions after studying various elements, including the rabies, sleepwalking, robots and dehydration. 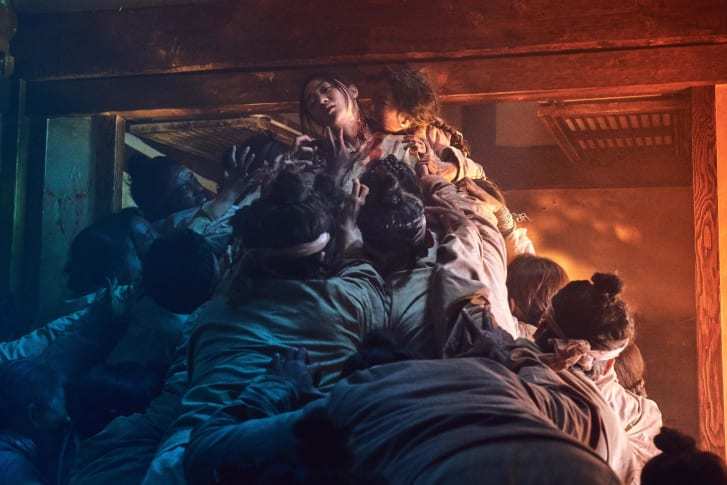 New zombie species in ‘All of Us Are Dead’

With global zombie sensation from “Train to Busan” and “Kingdom,” to “#Alive” (2020) and “Peninsula,” Korean directors and thelocal film industry have created their own formula, cementing the Korean-style zombie films.

While many Western zombie projects heavily focus on the lead characters’ survival and war against the undead, Korean zombie works focus on the story of the birth of zombies, mostly caused by mankind‘s sins, including excessive desires, greed, pollution, tech omnipotence and more.

The story centers around how humanity reacts to the zombies and seeks to reveal the true nature of humans in an apocalyptic world, painting a portrait of survival that is more hideous than bloodstained zombies.

In a bid to intensify viewers’ empathy with the story line, directors often present how the people, who were close to the lead characters, turn into zombies.
“All of Us Are Dead” (Netflix) “All of Us Are Dead” (Netflix)

“The horror, the bizarre and the speed aside, the series tried to focus on presenting the sadness and sorrow of watching their beloved classmates turning into zombies,” Gook Joong-yi, choreographer of Netflix’s upcoming zombie thriller “All of Us Are Dead,” said in a press release.

Though the series also follows the original formula, the director wished to show the evolution of Korean zombies through “All of Us Are Dead.”

Not all humans turn into zombies in the blink of an eye.

The zombie-turned-human undergoes several stages of emotional change from extreme fear with hallucination to intense aggressiveness with a will to survive.

Director Lee Jae-kyoo hinted that a new form of zombies will appear as well due to the special immune system of the students.

“Because the series is a project with 12 episodes, director Lee wished to present various types of zombies with different make up,” a Netflix press release quoted the makeup artist Pee Dae-sung as saying.

“In early episodes, the zombies’ skin tone and texture were not much different from the uninfected ones. But their faces start to crumble as the skin color changes drastically. Many 60-something actors were cast specifically for the zombie actions. Practices, including going on all fours, were held for about three to four months and many distinctive zombies will appear to entertain the viewers as well,” the director added, signaling the evolution of Korean zombies is yet to be ended.