TOKYO – Ukrainian President Volodymyr Zelenskyy emphasized in his online address to the Diet on Wednesday that nuclear power plants in his country are facing a crisis due to Russia’s aggression. He also expressed his affection for Japan and his hopes for the nation to strengthen its support for Ukraine and continue sanctions against Moscow.

When Zelenskyy, dressed in a khaki jacket, was projected on two large screens at a conference room in an office building for House of Representatives members, which is across the street from the main Diet Building, the assembled members of both Diet chambers and others applauded loudly.

“Russia has turned this [nuclear waste storage] facility into an arena of war,” Zelenskyy said, adding that four operating nuclear power plants in Ukraine have been “all under threat.” 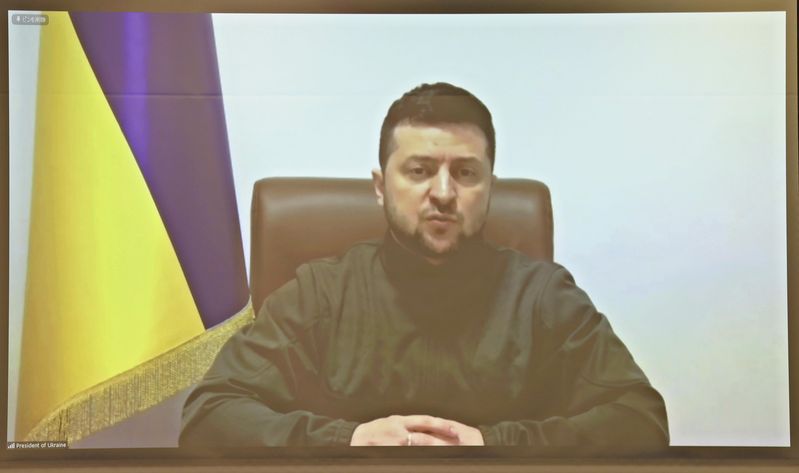 Ukrainian President Volodymyr Zelenskyy delivers an online address to the Diet on Wednesday.

After the Ukrainian president expressed his gratitude for Japan’s assistance, he stated particular concerns about Russian attacks on nuclear facilities.

“People need to go back to where they lived. Where they grew up. Where they feel is their home,” Zelenskyy said. “I’m sure you understand this feeling.”

Prof. Yoshihiko Okabe of Kobe Gakuin University, a Ukraine expert, said, “I think he was trying to gain the sympathy of the Japanese people by pointing to the similarity with Japan, which experienced the accident at the Fukushima No. 1 nuclear power plant.”

Regarding the United Nations, Zelenskyy raised questions about the current situation in which Russia, a permanent U.N. Security Council member, has exercised its veto power. He said the Security Council has been dysfunctional and stressed the need for reform. He also called for Japan to take the initiative for such reform.

Japan has long aimed for Security Council reform. A former cabinet minister who belongs to the ruling Liberal Democratic Party said the Ukrainian side “must have studied Japan’s foreign policy carefully and drafted the speech.”

In his address to the Diet, Zelenskyy notably attempted to project a pro-Japan image by making such remarks as that Ukrainians “really love” Japanese culture. He concluded the address with a Japanese word: “Arigato.”

In his online address to the U.S. Congress, Zelenskyy mentioned the 1941 attack on Pearl Harbor. In his speech to Germany’s Bundestag, he criticized that country’s deep economic ties with Russia.

In light of this, some LDP members had been concerned that Zelenskyy could go so far as to demand arms supplies and criticize Japan’s foreign policy regarding Russia under the administration of former Prime Minister Shinzo Abe, among other sensitive matters, according to a senior LDP member.

A member of the lower house Steering Committee involved in the coordination of the address requested the Ukrainian side in advance to avoid references such as the Pearl Harbor attack that could provoke a backlash in Japan, according to sources.

A senior Foreign Ministry official took Zelenskyy’s speech positively. “He didn’t make any criticism of Japan or unreasonable demands,” the official said. “While using moderate expressions, he conveyed his sincerity as a wartime president in the speech.”

A total of 40 foreign leaders, such as presidents and prime ministers, have delivered addresses at plenary halls of the Diet chambers since the end of World War II, but this was the first time that such a figure has delivered a speech remotely. As the plenary halls are not equipped with screens, the Diet members’ office building was used. At the request of the Ukrainian side, the Zoom web conferencing system was used to livestream the speech.