JAKARTA – The Indonesian Sign Language Center (Pusbisindo) is striving to improve communication for all through its ongoing efforts to cultivate and propagate a natural Indonesian signing idiom.

Rowena “Wen” Abdullah stared intently at her former classmates on her tablet, and they appeared to share her eagerness, but passersby expecting verbal exclamations of joy or excitement might have been surprised, as the meeting was conducted in silence.

“I keep in touch with my friends [online] every day, and see them face to face once a week […]. I have known them for years, as we are all alumni of the Cicendo Special Needs School [SLB] for the deaf in Bandung, West Java,” said Wen, whose alumni association belongs to the Movement for Indonesian Deaf People’s Welfare (Gerkatin).

“The COVID-19 pandemic did not damage our ties, as they remain as strong as ever.” Pusbisindo was founded in Jakarta in 2009, but Bisindo itself was developed in 2002 following “a dispute between Gerkatin, which represented deaf people throughout Indonesia, and the team formulating the [Indonesian Sign Language System (SIBI)] Dictionary”, noted the Pusbisindo website. “[Bisindo aims to] preserve a natural sign language.”

The organization soon found it had its work cut out for it.

“[Pusbisindo] had to struggle to overcome public indifference from 2009 to 2017 because of a lack of awareness about the linguistic structures of sign language and the lack of a viable system to hold sign language classes and raise awareness about this form of communication,” said Pusbisindo chair Laura Lesmana Wijaya, who was born to deaf parents.

“[Public awareness] of Pusbisindo did not really take off until 2017, when the numbers of people fluent in sign language, teaching sign language classes and [working in the organization’s] administration began to increase.”

Now, Pusbisindo has branches in 10 provinces, including much of Java, Bali and parts of Sulawesi, Kalimantan and Sumatra. It plans to open five additional provincial branches in Java, Sumatra and Papua.

“Pusbisindo’s expansion to different provinces has to take their different cultures and languages into account, as the languages of different areas are defined by their respective cultures,” said the Chinese University of Hong Kong alumnus in sign language.

“Sign language, as with other forms of communication, should not be standardized. Standardization of language is a discriminatory practice, as it impedes our fundamental human right of free self-expression,” Laura added.

“As a visual-spatial form of communication, sign language enables the deaf to communicate through the use of classifiers to convey a number of words, as well as non-manual expressions [using] faces, heads and bodies. For example, a sad face is universally understood to represent sadness, but sign language requires a more abstract, non-iconic approach to describe words like ‘if’, ‘explanation’ or ‘exist’.”

“Bisindo can develop independently because its natural structure remains viable. As a language used for educating and communicating among the deaf, Bisindo has managed to grow independently of influences from overseas,” she said. 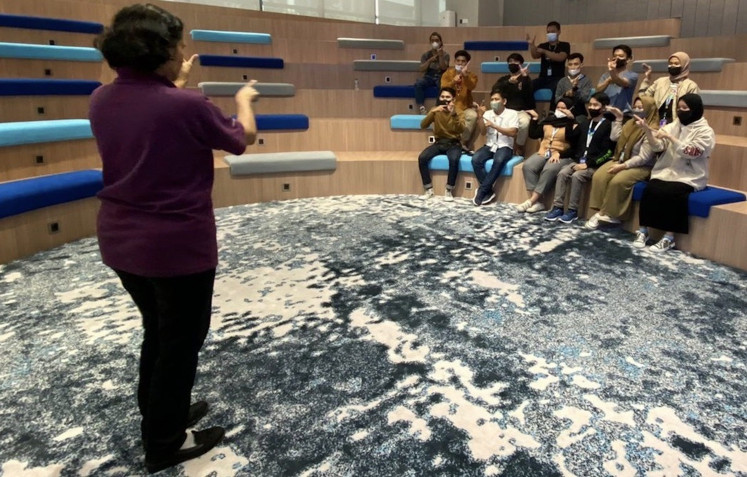 Since its founding, Pusbisindo has sought to bridge the divide between deaf people and other members of society.

“There are an estimated 2.5 million deaf people in Indonesia, [and] Bisindo is the most effective form of communication for them. It can be used by everyone, not just the deaf,” the organization’s website reads.

“Aside from breaking down barriers in communication and creating an inclusive environment for the deaf, learning Bisindo has a number of benefits, including broadening expression, balancing the left and right sides of the brain, a network of friends among the deaf, as well as the opportunity to be a sign language spokesperson.”

Pusbisindo practices what it preaches. The center has held workshops and classes for a variety of businesses and state institutions over the years, including Gojek, Grab, the University of Indonesia, the Finance Ministry and the Communications and Information Ministry. “Pusbisindo holds three major events annually, namely International Sign Language Day, get-togethers between Bisindo teachers and [Pusbisindo’s] directors, as well as awards for the best sign language teachers,” said Laura. “

The [awards are] designed to bolster the teachers’ self-confidence in their skills and display them in public. Their ability to do so can strengthen the deaf community’s self-confidence and help them maintain their identity.”

As with other forms of communication, mastering sign language does not always come easily.

“The ability of people to master [sign language] varies. But in my experience, those who take a while to attain fluency in sign language include deaf people who are illiterate and people with normal hearing,” said Dhita, a Bisindo instructor for over seven years.

Pusbisindo’s efforts to broaden communication can be seen in the lives of people like Wen and her loved ones.

“Understanding Bisindo and its role in facilitating [communication] has helped me become more aware of and sensitive about [the deaf and hard of hearing] and their challenges. I noticed that Bisindo helped bridge the divide between them and the rest of society,” said Wen’s niece Ariqa Rahma.

“While the government has already made strides, such as providing hearing aids or facilitating the creation of driver’s licenses for the [deaf and hard of hearing], the most essential thing for them is the support of family and the role of sign language in bringing them together.”

While Pusbisindo’s work has brought about advancements for Indonesia’s deaf community, Laura has no illusions about the challenges they still face.

“Deaf people experience discrimination every second of their lives, much of which stems from their lack of access to effective communication, starting with their immediate family, then the public at large,” she said.

“Sign language is not the only means to overcome prejudice. It should be used simultaneously with raising awareness about [deaf people’s] importance […]. The deaf should be confident in signing with Bisindo, as it is integral to our identity.”