Earlier in the day, reports of the Taliban government’s Deputy Prime Minister Mullah Abdul Ghani Baradar replacing Akhund started doing rounds on social media. Subsequently, Mujahid, in a tweet, clarified that media reports of any reshuffle of the prime minister and changes in the cabinet were untrue. 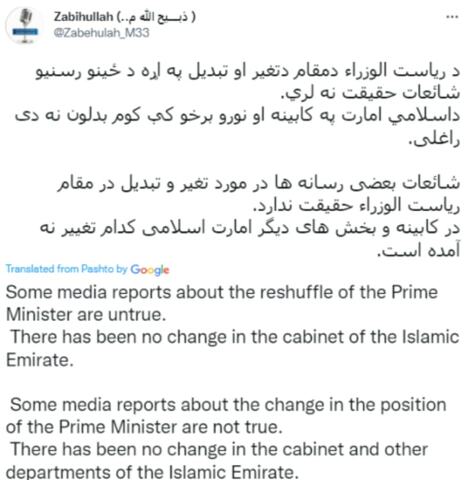 “There has been no change in the cabinet of the Islamic Emirate or anywhere else,” he added.

In September, the Taliban appointed Akhund as its new head of state. Prior to his ascension to the top office, Akhund was the head of the Taliban’s Rehbari Shura or leadership council. He hails from Kandahar and is also said to be one of the founders of the movement.

The rumours of Akhund being replaced emerged after China’s Foreign Minister Wang Yi, for the first time since the Taliban takeover, arrived in Kabul unannounced on Thursday morning.

The visit comes a week before Beijing hosts a two-day conference — on March 30-31 — comprising Afghanistan’s neighbours on how to assist the Taliban government. Pakistan and Iran had earlier hosted similar meetings after the Taliban takeover.

The two sides are expected to hold talks on important issues, focusing on China’s role in stability and development of war-torn Afghanistan.