ISLAMABAD – The water level in the Manchhar Lake — one of the largest freshwater reserves in Pakistan — receded to some extent on Wednesday while efforts continued to protect ring embankments raised to protect Mehar town from further deluge.

Manchhar Lake has been the main source of the threat, compelling authorities to breach its protective dykes and other structures along its paths in an attempt to divert the flow of water towards less populated areas and prevent flooding in densely populated regions.

Mehar Assistant Commissioner, Mohsin Sheikh, told Dawn.com that around 10 to 12 feet of water was still stagnant in the surroundings of Mehar town located in Sindh’s Dadu district.

“The water level will decrease gradually and we are trying to strengthen dykes to protect them from breaching or damage, he added.

He said the government was more focused on providing relief goods to affected people in flood-hit areas. 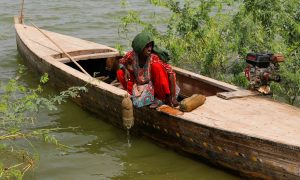 A woman, who become displaced, fills bottles from flooded Manchhar Lake, following rains and floods during the monsoon season in Sehwan on Tuesday. — Reuters

Separately, an official in charge of the irrigation cell for the lake, Sher Mohammad Mallah, told Dawn.com that the water level in Manchhar had reduced to 122.2 feet from 122.5 feet — against the full capacity level of 122.8 feet — as the water was now flowing directly into Indus River through the Larkana-Sehwan (LS) bund.

Irrigation engineer Mahesh Kumar told Dawn.com that the water level had witnessed a reduction of one foot in the Indus Canal at Bhan Syedabad and surrounding areas. However, he added that 10-feet-deep water was still stagnant at Mehar’s ring bund.

MNA Sardar Sikandar Ali Rahoupoto said the situation at the ring bund in Dadu was deteriorating due to gusty winds and tides generated in its wake on Tuesday night. But by Wednesday morning, it had returned to normal. A view of a flooded village in Sehwan. — Photo provided by author

“We have to release it to River Indus through Manchhar Lake,” he told a press conference in Karachi today. He added that the lake also had 1.3m acre-feet of water.

He said 175,000 cusecs of water went to the river only yesterday (Tuesday) through cuts made by the local administration to prevent several towns and villages from inundation.

The provincial chief executive insisted that there was a process behind taking out the water, adding whatever was humanly possible was done by the authorities. Children, who became displaced, stand outside their family tent while waiting for food handouts and relief material, following rains and floods during the monsoon season in Sehwan, on September 14, 2022.—Reuters/Akhtar Soomro

“We received 800pc more rains in Sindh causing the kind of devastation we all are witnessing,” Shah said.

He maintained that there was a reduction in the water level everywhere in the Right Bank Outfall Drain and the river was becoming “more favourable”. We have opened some canals and barrages strategically to control water flow, he added.

He told journalists that the provincial administration took decisions in consultation with the army teams.

Talking about relief measures, the chief minister said the Provincial Disaster Management Authority had so far delivered around 200,000 tents against the requirement of two million tents in flood-hit areas.

He continued that 146,060 tarpaulins and 316,000 ration bags were also distributed among the affectees.

“The outcry of people [who haven’t received the aid] is justified and the government is taking all-out measures to address their plights,” he said.

Meanwhile. Karachi Administrator Murtaza Wahab tweeted a flood update, saying the discharge at Kotri downstream had come down to 487,312 cusecs.

He also posted the latest video of the lake’s Aral Tail, showing the quantum of water flowing into River Indus. “Despite the unprecedented situation, the administration has tried it best to address issues,” Wahab said.

Rahoupoto said that at least 150 villages have been submerged with floodwater in Bhan Syedabad and its surrounding areas.

He said efforts were afoot to protect the city in Sehwan tehsil as floodwater in the area was yet to recede. “Machinery is employed in Saeedabad and the work is going on continuously to protect Bhan Syedabad from further inundation.”

Rahoupoto, who had been elected from the area’s NA-233 constituency, said at least seven union councils were flooded in Sehwan tehsil while rescue work was underway.

Sehwan Assistant Commissioner Iqbal Hussain said the locals had been shifted to safer places due to the stagnation of floodwater in villages.

Meanwhile, at least 315 villages in union councils Muradabad, Khudabad and Yaar Muhammad Kalhoro of Dadu have been inundated with floodwater. Locals said the water had receded up to one foot at different places from Dadu, Mehar, Khairpur Nathan Shah and Johi, but the threat remained.

Floods from record monsoon rains and glacial melt in the mountainous north have affected 33 million people and killed almost 1,400, washing away homes, roads, railways, livestock and crops, in damages estimated at $30 billion.

Both the government and UN Secretary General Antonio Guterres have blamed climate change for the extreme weather that led to the flooding, which submerged nearly a third of the country.

Earlier in the day, Prime Minister Shehbaz Sharif visited Balochistan’s Sohbat Pur district and announced an exemption on electricity bills for August and September for the residents of flood-hit areas.

“You won’t have to pay the bills for these months as we have completely slashed them,” the premier said in a media talk.

During his visit, he reviewed relief efforts underway in the district and talked to the residents. The prime minister noted that the impact of floods could not be dealt with overnight as the damages had occurred on a wider scale.

He said the government had already announced aid of Rs70 billion with Rs25,000 being distributed per house affected by floods. “We have so far distributed Rs24bn.”

Shehbaz said the scale of devastation had “opened the eyes of the nation as everyone is dealing with it”.

He also instructed authorities to ensure the availability of drinking water and life-saving medicines on a priority basis in the Sohbat Pur area. The premier further directed to pace up the drainage of stagnant water and complete the activity in 10 days instead of the expected fortnight.

The National Disaster Management Authority (NDMA) has advised authorities to stay alert and ensure the timely evacuation of at-risk populations in light of the Flood Forecasting Division (FFD) warning of an increase in flows in Rivers Sutlej, Ravi and Chenab and their associated tributaries and nullahs in Sindh and Punjab on September 17 and 18.

In a flood advisory issued on Tuesday, the NDMA said the FFD had identified a well-marked low-pressure area over the central parts of Madhya Pradesh in India and forecast that this weather system might affect the upper catchments of eastern rivers — Sutlej, Ravi and Chenab — from September 17-18. A displaced man rides a donkey past a submerged tree, following rains and floods during the monsoon season in Sehwanm on September 14, 2022.—Reuters/Akhtar Soomro

During this period, the advisory said, the flow of water was expected to increase in the three rivers and their tributaries and nullahs.

It advised relevant departments, including provincial disaster management authorities and irrigation departments and district, municipal and city administrations, to forewarn at-risk communities about the possible increase in the flows of water and maintain an enhanced alert level while monitoring the developing situation to reduce reaction and response times.

The authorities were also asked to pre-place rescue teams and equipment for rapid deployment in vulnerable areas, sensitise people living along the banks of the three rivers about the expected increase in water flows and timely evacuate the at-risk population from low-lying and flood-prone areas in line with evacuation plans and the availability of space, food and medicines at shelter camps.

Moreover, the advisory stated that in case of any eventuality, a special situation report or updates should be immediately shared with the NDMA.