DHAKA – Economists are fond of drawing analogies from flying. Thus, when economies attain sufficient, sustained growth, they “take off.” When external conditions help them grow faster, they are pushed by “tailwinds.” Conversely, if unfavourable conditions force them to slow, they face the “headwinds.” When economies are unstable, it is “bumpy.” When they have to slow down quickly and significantly, we question whether they will have an orderly slowdown, a “soft landing,” or a disruptive one, a “hard landing.” Or, heavens forbid, a “crash.”

In our neighbourhood, the Sri Lankan economy crashed. As recently as in 2018, Sri Lanka’s outwardly booming economy attained the World Bank’s upper middle-income status. However, it accumulated debt over the past decade and became vulnerable. A reckless tax cut that tripled the fiscal deficit in 2020 was the straw that broke the camel’s back. Today, it has defaulted on debts and desperately seeks financing for food, fuel, power, medicine, and other necessities.

Also, in our neighbourhood, the Pakistan economy is, optimistically speaking, going for a hard landing, perhaps a crash if they cannot negotiate an IMF programme or get a bailout from one of its strategic allies. Having run up a large current account deficit of USD 19 billion in 2019 along with rising debt payments, the economy had an abrupt slowdown – i.e. a hard landing. Even so, the difficulties persist; Pakistan’s currency has depreciated by nearly 25 percent since this January, with inflation rates ranging somewhere between 14 and 24 percent, depending on the measure. Sri Lanka’s and Pakistan’s economies are now paying for several years of large fiscal and current account deficits and debt.

Further west, the Turkish economy provides another lesson for Bangladesh. It’s having a bumpy flight buffeted by a vicious inflation-depreciation cycle that has led to 70 percent inflation rates and a 47 percent currency depreciation in the past year. It’s worth noting that these developments are taking place even though Turkey’s public debt is relatively moderate at about 40 percent of GDP – the same as Bangladesh. Another unfortunate similarity with Bangladesh is that “Erdoganomics” has compelled the central bank to keep the interest rates low. Turkish President Recep Erdogan fired three central bank governors because they resisted him. Yes, the Turkish capital account is open, and ours is not. But with foreign currency transactions of more than USD 150 billion in the last year, we are not exactly closed either. Having flexible interest rates will be a key instrument to stabilise our economy. 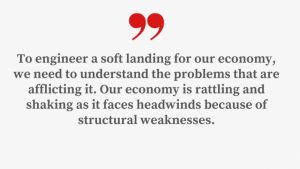 The challenge ahead is to pilot Bangladesh’s economy to a soft landing. Like much of the world, Bangladesh’s economy is facing strong headwinds and turbulence. High oil, LNG, cooking oil and food prices, and an overvalued foreign exchange rate, increased our import bill in the last year to USD 84 billion, the trade deficit to USD 32 billion, and the current account deficit to USD 17 billion – all record-breaking numbers. Despite Bangladesh Bank’s interventions to prop up the taka by selling dollars and reducing the reserves by USD 7 billion, the taka has depreciated by roughly 10 percent over the last three months, and the kerb rate is now more than 20 percent. To reduce imports and protect reserves, the government has reduced power supply by 1,000-1,500MW and announced a hefty 35-45 percent increase in fuel prices.

Ominously, as our prime minister rightly recognised, there are also global threats to the food supply. Because we import about half of our wheat from Ukraine and Russia and nearly four million tonnes of fertiliser, where Russia and Belarus are significant producers of inputs too, our food supply and prices may be strained.

To engineer a soft landing for our economy, we need to understand the problems that are afflicting it. Our economy is rattling and shaking as it faces headwinds because of structural weaknesses. By ignoring long-standing issues in the pursuit of growth, suddenly we are back to the era of rolling power cuts, with the taka and the forex reserves under pressure.

Most significantly, it points to an economy that has become less competitive. The big-picture measure of economic competitiveness is a country’s export-GDP ratio. If a country’s economy can sell proportionately more abroad as it grows, it indicates increasing competitiveness. Bangladesh went into reverse in the last few years. Our export-GDP ratio fell from a peak of 20 percent in 2012 to about 13 percent in 2019 and even less during Covid. In striking contrast, Vietnam’s export-GDP ratio rose to over 100 percent during this period. Underlying our decline in competitiveness is the lack of export diversification and sophistication. Despite showing potential, we cannot significantly export higher value products not only in electronics, but also in agricultural processing.

We are even more dependent on ready-made garment (RMG) products and remittances than we were 10 years ago. As the prime minister has rightly pointed out in a recent meeting, this dependence on remittances is undesired. If Bangladeshi workers abroad did not remit close to USD 20 billion per year, we might be in the same situation as Sri Lanka.

There is nothing mysterious about why we are in this predicament. Bangladeshi economists have repeatedly pointed out in detail the following: i) Our revenues, and thus our public expenditures, are too little to sustain high growth. Moreover, our revenues are too dependent on tariffs and supplementary taxes, which make the economy less competitive; ii) Our limited public expenditures need more scrutiny and prioritisation through proper vetting. These would include cutting back uncontrolled and untargeted subsidies and incentives, and egregious payments to private power producers, while providing more significant resources for social protection; iii) Our real exchange rate has been unsustainably appreciating over the past many years, and we should have let it depreciate to encourage exports and remittances instead of using ad-hoc incentives; and iv) Our financial system needed to be unburdened of interest rate caps, strengthened by disciplining loan defaulters and reconstituting bank boards to avoid insider lending and worse. 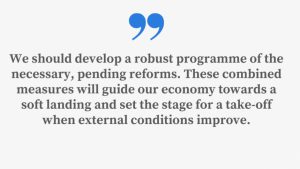 It has also become glaringly evident that longer-term issues such as exploring potentially large gas reserves were neglected. Equally important is paying attention to other structural issues: the need for well-planned urban development and infrastructure investments, and a focused strategic approach to invite foreign direct investment (FDI) into electronics, pharmaceuticals, leather, shipbuilding, and agro-processing. These are all areas where Bangladesh shows potential, but urgently needs the resources, technology, and market access that FDI will bring. Only in this way can we diversify our economy and increase our export competitiveness.

No less important, we should stop resting on the laurels of our human development success. The reality is that we have barely scratched the surface of what needs to be done. Compared to our competitors in East Asia, our labour force is far less educated and technically trained. Three national student assessments have revealed that many of our students do not display their grade-level educational competency, i.e. they are not taught well. Also, we do not train enough young people in technical and vocational education streams with private and foreign investment participation.

These are not easy tasks, but are urgent and will call for significant institutional reforms. But what of now?

Our government has shown foresight in approaching the International Monetary Fund (IMF) for support before our current difficulties become a crisis. From what we have seen in the press, the proposals discussed with them make eminent sense: they address issues long identified by Bangladeshi economists. With the help of the sufficient expertise that we have, we can work with the IMF to come up with a programme of a smoother, gradual adjustment – and not abrupt, punitive movement in prices – that will shore up our financial position, stabilise prices and the exchange rate, and restore confidence. At the same time, we should develop a robust programme of the necessary, pending reforms. These combined measures will guide our economy towards a soft landing and set the stage for a take-off when external conditions improve.

Dr Ahmad Ahsan is the director of the Policy Research Institute (PRI) of Bangladesh and a former World Bank economist and Dhaka University faculty member. Views expressed in this article are the author’s own.