BEIJING – China plans to raise its annual defense budget by 7.1 percent to 1.45 trillion yuan ($230 billion) for the 2022 fiscal year, its seventh-straight year of single-digit growth, according to a draft budget plan unveiled on Saturday.

The figures were included in the report prepared by the Ministry of Finance and distributed to some 2,800 national legislators attending the fifth session of the 13th National People’s Congress in Beijing.

If approved by lawmakers, the proposed expenditure will mark the return of a 7-plus percentage increase after slightly lower increases in 2020 and 2021.

Armed forces must stick to the goals set by the Communist Party of China, conduct combat training and exercises, and employ firm and flexible countermeasures against provocation to better safeguard sovereignty, security and national interests, the report said.

The military should accelerate the upgrade of its logistics, asset management and equipment management systems, deepen reforms, encourage more innovation in defense technology, and attract and train more talented professionals.

A military observer who wished to be identified only as Cui said that considering the fact that the world is facing rising uncertainties in stability and security, and that China has to handle threats and provocations from various directions, it is a must for the nation to continue improving its military capabilities and combat readiness so it can ensure its sovereignty, security and interests are not compromised and challenged.

The world’s largest spender on the military is the United States. Its defense budget for the fiscal year 2022 is $768.2 billion, accounting for almost 40 percent of the world’s total military spending.

According to reports from multiple news agencies, the Biden administration is expected to ask the US Congress for more than $770 billion for its defense budget for the next fiscal year. 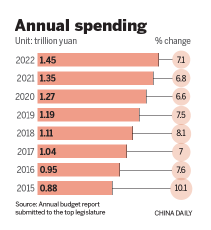