BEIJING – Two villages have been named the Best Tourism Villages 2022 by the World Tourism Organization, thanks to their achievements in balancing tourism with economic development while adhering to environmental protection.

According to the organization, 32 villages in 18 countries and regions including Austria, Chile and China were awarded the recognition late on Tuesday. China’s Dazhai village in the Guangxi Zhuang autonomous region and Jingzhu village in Chongqing won the recognition.

Dazhai village, in Guangxi’s Longsheng autonomous county of various ethnic groups, has terraced fields of around 66 square kilometers that have a history of over 2,300 years. The terraced fields and exotic culture of the Yao ethnic group and their unique architecture attract tens of thousands of visitors every year.

Figures cited from the county’s culture and tourism bureau show that tourism development in Dazhai has brought tangible economic benefits to villagers and created more jobs for them after the village started to develop tourism around 2003.

Yang Qingguo, the county’s director of the culture and tourism bureau, said the village has fostered a sustainable development model of sightseeing, cultural experience of the Yao ethnic group and agriculture.

“The Yao people have made their traditional costumes and customs highlights of the village’s tourism, and the development of tourism helps channel funds and resources to the village’s protection of its terraced fields and architecture. It’s a sustainable life cycle,” he said.

He added that the village will continue to develop tourism rooted in the Yao culture and the landscape, and introduce new offerings such as helicopter trips and leisure resorts, to enrich people’s experience.

Jingzhu village, the other village recognized by the World Tourism Organization this year, is located in Wulong district of southwest Chongqing and has heritages of batik dyeing, bamboo weaving and paper cutting arts.

The village promotes the sustainable development of agriculture and tourism. It has a 200-hectare fruit and vegetable base and over half of the villagers work in the tourism industry.

The World Tourism Organization began to award Best Tourism Villages across the world in 2021 to promote the cultural heritage protection and sustainable development of villages. China so far has four villages winning the title, with the other two being Yucun village in Zhejiang and Xidi village in Anhui. 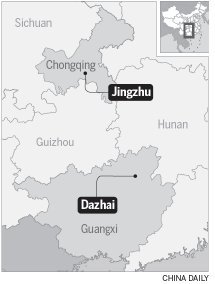