DHAKA – With a sliver of sanity realising the urgent need for damage control, Brazilians have voted out their most dangerous populist leader: the science-denying, environment-damaging, guns-and-threats-embracing President Jair Bolsonaro. The bombshell return of their leftist former president, Luiz Inacio Lula da Silva – who was freed from prison once corruption charges against him were annulled last year – is one to celebrate, mostly as it symbolises an end to Brazil’s worst nightmare. And because it means one less far-right extremist leader in the world, sprouting lurid deranged theories into thin air.

Lula’s win, on the other hand, marks the most significant example yet of Latin America hurtling to the left since 2018, with the election of Andres Manuel Lopez Obrador in Mexico. It is an anti-incumbent fervour – usually ignited by frustration with far-right wing leaders – that has caused this shift. While there are challenges for these new governments facing a bleak economic future, it is more so a cautionary tale for Europe, very much entrenched in the claws of surging far-right party power. There’s a lot to learn, to debate and reflect, on Brazil’s divorce from Bolsonaro. Once it actually happens.

If recent history has taught us anything, it’s that far-right extremism, once benched in the presidential chair, is hard to shuffle back to the fringes. Leaders across the world have welcomed the former President Lula, but Bolsonaro has remained suspiciously – or expectedly – silent, even as his key allies accepted the results. The chances of him accepting the election results and having a clean departure are not particularly high. Inspired by Donald Trump, of course, Jair Bolsonaro, for the past several months, continued to cast doubts on the voting machines as “rife with fraud” – without any credible evidence, and against the evidence existing to validate that Brazil’s voting machine system is hard to tamper with.

During a speech in June, Bolsonaro said, “If need be, we will go to war.” Brazil’s elections saw their social media turn into a wild misinformation-firing machine, with a “direct role” from Bolsonaro, according to a document from the federal police. Researchers warned about military coup planning on platforms such as Telegram and Gettr. Bolsonaro’s election tactics to tarnish democracy makes it probable that he will refuse to step down in some way or contest the results.

A post-election coup might not be possible, though, even if the nation has a history of military coup and even if Bolsonaro happens to be a fan of that sadistic military dictatorship from 1964 to 1985. According to dozens of Bolsonaro administration officials, military generals, federal judges, election authorities, members of Congress and foreign diplomats, Bolsonaro ultimately couldn’t garner the institutional support needed to stage a successful coup. 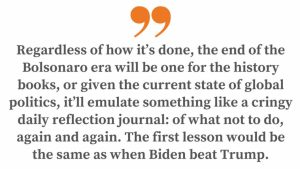 Regardless of how it’s done, the end of the Bolsonaro era will be one for the history books, or given the current state of global politics, it’ll emulate something like a cringy daily reflection journal: of what not to do, again and again. The first lesson would be the same as when Biden beat Trump. The dangers of electing far-right extremist leaders, only so the next four years tumble into a mad show of how low a nation could go.

Bolsonaro, a former army captain, came to power, stripping enforcement measures to protect the Amazon, cutting spending for science, firing environmental experts and pushing to weaken indigenous land rights with his development-at-all-costs approach. Chiming the infamous theory that vaccines have nanobots, Bolsonaro’s Brazil arguably had the worst pandemic response, killing 300,000 people in a failed bid to achieve herd immunity, while also creating new variants, such as the P1, endangering more people as it spread to other countries.

Under his leadership, Brazil, the former poster child for conservation, saw their environment ravaged as Bolsonaro rolled back legal protections, with the Amazon alone facing nearly double the deforestation since 2018, even as Bolsonaro infamously put it, “Amazon cannot catch fire.” Now that we know it can indeed catch fire, here’s what the world’s largest rainforest will gain from Bolsonaro’s loss: an analysis by the climate website Carbon Brief suggests that if Bolsonaro loses to Lula, annual deforestation in the Brazilian Amazon could be down by nearly 90 percent by the end of the decade.

Months nearing the election, as civic life became enveloped in fear of some form of political violence, it became clear that ousting him was an absolute necessity. The elections came down to a binary of sorts: those for, and those against Bolsonaro. It is this unity, in a polarising table, that led to the narrow victory of Mr da Silva. This sort of unity against a leader or a party is a trend that follows after the regime damages civic life to its last straw. We’ve seen it with Trump. To say what we’re seeing in the masses gathered at BNP rallies in Bangladesh mirrors this same dynamic is not too far-fetched either.

If anything, Brazil’s elections should be a wake-up call for Europe, embracing more far-right extremism, with the newly elected Italy’s Giorgia Meloni and her far-right Brothers of Italy party, while Hungary and Poland continue to be run by far-right politicians untethered from economic reality.

But for some of us, like Bangladesh, we don’t even have that division of far-right and left-wing discussion to gauge a wake-up call or lesson from Brazil. For one, Brazil had other options against Bolsonaro. They could only oust Bolsonaro with a fair electoral system, and a solid electronic voting system. In Bangladesh, we are too deep in our own Bolsonaro era. Too deep to perhaps get out. But we can watch Brazil for now as they dive into undoing a devastating legacy of a fascist leader and restore their semblance of sanity as a nation. Maybe then, we, too, can vicariously find some ourselves.

Ramisa Rob is a journalist at The Daily Star.