DHAKA – The other day, as I was aimlessly scrolling through my Goodreads app, at 1 am on a Tuesday night, I noticed one of my ex-colleagues reading a book that I had recently finished and found so mind-numbingly tedious that I had half an urge to play Jesus and reach out to say “Dear child, Stop! I got burned so you could be saved”. I restrained myself from said God-ism because I haven’t spoken to this lady in over half a decade, so the gesture may have been considered borderline disturbing. My auto-stalker instincts, however, led me to browse her TBR list and thank the Lord, I found some brilliant books in that pile that I’ve absolutely adored in the past, thus thought it best to leave her to her current dull read. Surely, better days are ahead for her.

Did this help me sleep better that night? No. Instead, I felt a sense of envy over the fact that she gets to experience these wonderful pieces of work for the very first time. So, I decided to do what any insomniac does at the wee hours of the morning—make a list.

This one is rhetorically titled, Five Books I Would Sell My Soul to Read for The First Time Again:

THE REMAINS OF THE DAY (1989)
Kazuo Ishiguro One of my first 5 star reads of 2022 and I cannot believe it took me 35 years of living on this planet to discover the works of this Noble Prize-winning author. Ishiguro is an artist like no other and this is his masterpiece. It is his homage to England, its glorious past, its noble riches, its gorgeous landscapes and ultimately its torment through two great wars. He writes the book in the form of an unseeming travel memoir, one that is embarked upon by his protagonist Mr Stevens, a very uptight and loyal English butler. His character is unknowingly comedic, thoughtful, noble and committed to his place in the world like no other. Through his eyes, Ishiguro tells a tale of solitude, human connections, loyalty, class diaspora, self-realisations, lost love, regrets and acceptance
It is so very rare that you come across a book that you know will stay with you till the end of your time and be read and reread in the hopes of discovering tiny bits of missed magic the first time around; but the first will always remain the first. 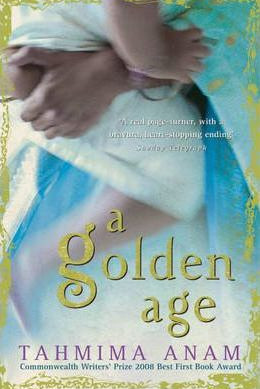 There are a few moments in your lifetime that are so entrenched in the crevices of your brain that you tend to remember the minute details of what day of the week that was or the exact jacket you had on. Witnessing for the first time a Bangladeshi woman author’s English hardcover novel on a bookshelf in an indie neighbourhood bookshop in Sydney was all that for me. I distinctly remember the elegant blue and gold cover of the dust jacket, of a mother holding her child, the blue being the drapes of her untamed sari, an almost illusion-like quality to the image. I remember to this day the rush my 20-something year-old self had felt while reading the blurb at the back, knowing that I would finally be reading about my country’s glorious yet bloodied past in an English work of literary fiction.

I so desperately hoped that the narrative flowed effortlessly and stayed authentic to our history; and oh-how not-disappointed I was! Anam expertly crafts each of the characters of the Haques, the titular family of this saga (which eventually went on to shape itself to a trilogy of sorts), their trials and tribunals during the cusp of the most trying time of Bangladesh’s history and its war towards liberation. Anam’s plot takes a while to firm up, but her world-building is so immaculate that I read some of her passages twice to savour the Bengali pride. The underlying themes of motherhood, national pride and female roles in the otherwise masculine brutality of battles makes Anam’s debut one of the finest till date to have come out from our side of the world. My first foray into the world of contemporary Japanese literature (barring some Harukami classics), this book changed the way I identified myself as a reader. Up until I read this, I was a seeker of solid plotlines—a punchy middle, a heart stopping climax, the shattering finish; I needed it all. Kawakami taught me how to look for the epic in the mundane. Like a work of origami, he starts with nothing but porous paper and with tremendous subtlety takes his gorgeous characters and his readers to the finish line; no glue, no cuts, no markings on the paper needed.

This is a story about solitude and the need to find connection in the strangest of places and people. It is a tale of love, told respectfully and with profound elegance, between a woman in her 30s and her old high school Sensei. Between their dream-like, quiet nights in small Tokyo Sake bars and the weather outside described as if it were the symphony of their togetherness, I was a reader changed forever. I’ll be honest, I am offended that Gail Honeyman hasn’t released a second novel since this stunning debut. I want to read a Honeyman work for the first time again, and that is that! Also, Eleanor Oliphant might be completely fine, but, after reading this book, I most definitely was not. The last 70 pages or so of my copy may or may not be drenched in tears and snot, deeming the copy unfit for borrowing.

Frankly, when I had read the blurb at the back, I had already issued a sanction on books with lonely, quirky characters in mundane jobs who can’t seem to pick up social cues and are oblivious to personable behaviours. Done to death, right? Wrong. Honeyman gives you a masterclass on how to write a non-neurotypical character, while not explicitly shoving their diagnosis down your throats. She does what so many authors of this genre fail to do, she gives Eleanor a personality beyond her mental illness and equips her with a backstory so chilling that you want to root for her beyond the 350 pages of her chronicle. Thus I ask again: Where’s the second book, Ms Honeyman?

NINE LIVES: IN SEARCH OF THE SACRED IN MODERN INDIA (2009)
William Dalrymple It’s hard to believe that I’ve chosen to include a work of nonfiction, a single-authored anthology written by a historian in this list. Dear readers, fun fact: I am not a fan of short stories or dry-slogging historical narratives “subjectively” written by ancient white men on the topic of my subcontinent. Instead, I have chosen a husband who is an ancient-at-heart, white man with a lot to say about the history of my subcontinent—that, though, is a story for another day.

With Nine Lives, William Dalrymple not only showed me that in literature, there is no place for stereotyping, but goes on to write nine of the most compelling, magical and illustrative pieces that delve into the world of ancient religions, rituals and faith from the nooks of India. Nine stories of nine lives—there is a tantric, a nun, a prison warden who plays God, a prostitute; Dalrymple tells their tale sans judgement and with great dignity. His narrative takes the form of a travelogue and his observations are remarkable, honest and spellbinding.

Once, during the Dhaka Lit fest, I had asked the author whether he was still in touch with some of his characters from the book, to which he replied that he was, but that should not matter to the reader as the stories of these individuals are more expansive than his relationship with them, which is only a fragment of their entirety. Right then I knew, from that point onwards, I had a favourite historian!

Dearest readers, as always, thanks for being with me and my sincere case of word diarrhoea. These books, while possibly not my favourites of all time (I mean, hello, Pride and Prejudice), are all my 5 star reads and the impacts they left on my heart, on the very first read, were beyond profound. I also noticed that three of the five books listed here have an overarching theme of tragedy and solitude. Maybe a little less reading and a little more therapy for me then.