TOKYO – A community movement to encourage Japanese people to use “yasashii nihongo,” or easy-to-understand simple Japanese, for non-native speakers is gaining traction in Ikuno Ward, Osaka, where people from about 60 countries reside.

One Sunday in March, parents arrived with their children at Tsudoi no Hiroba Po Po Po, a child-rearing support facility in Ikuno Ward. A 28-year-old Vietnamese national came with her 1-year-old daughter. She has been living in Japan for four years and is still learning the language.

“Does she go to a nursery school?” Kuniko Morimoto, a nursery school teacher and the secretary general of Seiwa Kyodo Fukushikai, a social welfare group that operates the facility, asked the mother in Japanese. She appeared confused, so Morimoto said the Japanese word for nursery school more slowly. The mother then seemed to understand the question and told Morimoto the name of the school her daughter attends.

A 34-year-old man from Sierra Leone visited the facility with his two children. “Japanese is difficult, but the staff here speaks to us in a way that’s easy to understand,” he said.

Morimoto said, “I want to make this facility a place where parents and children feel comfortable, even if they don’t understand Japanese that well.”

Simple Japanese is spoken by breaking up a sentence into short phrases or using simpler words. The idea of using this type of Japanese came from failing to convey vital evacuation information to foreign nationals after the Great Hanshin Earthquake in 1995.

“The concept of simple Japanese is similar to universal designs, which are environments that can be accessed by everyone, whether or not they have a disability,” said Keizo Yamawaki, a professor at Meiji University and specialist of multicultural societies.

He also pointed out that the word “yasashii” not only means easy, but also kind.

In Ikuno Ward, there are currently 174 establishments, including restaurants, real estate agencies and hospitals, implementing the concept.

“I once explained iced coffee to a customer by having them touch ice,” said Kiyoko Hashizume, who runs a coffee shop. “I enjoy such interactions.” 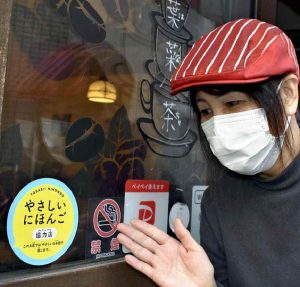 A sticker at a coffee shop indicates that it uses “yasashii nihongo,” or easy-to-understand simple Japanese.
The Yomiuri Shimbun

Tomoko Fujiwara of Keiseikai, which operates a business that dispatches care workers, said, “This type of Japanese is also easily understood by the elderly, so it’s useful in the care field as well.”

Masatoshi Kambayashi, who works for the ward’s planning and general affairs department, said, “Local residents are becoming more aware of the importance of respecting diversity and connecting with each other based on the notion of simple Japanese.”

A non-profit organization established by the ward’s residents plans to open a multicultural exchange facility in a vacant school building that will offer a play space for parents and children, as well as a place where people can learn Japanese.

A diverse community can enrich the lives of its residents. It is also important for people to accept each other’s differences and interact without prejudice.

Yamawaki points out that, in order to create such relationships, it is helpful to work together on projects or issues such as child-rearing or disaster preparedness.

“The relationship might start off in a limited scope, but it will gradually expand and ultimately lead to creating a comfortable community for everyone,” Yamawaki said.

In 2019, a buddy system was established in Takahama, Aichi Prefecture, that paired Japanese volunteers with foreign nationals to promote multiculturalism. The program has volunteers teach non-Japanese residents about local traditions, among other cultural topics.

Junko Niimi, representative director of Trading Care, the program’s organizer, said, “I want to build a community in which residents have a sense of connection with each other.”

The city of Nagareyama, Chiba Prefecture, uses the slogan, “Nagareyama is the place to be if you were to become a mother,” to advertise the city as a family-friendly area.

“We have implemented policies focusing on the child-rearing generation,” a city official said. “As a result, we have created a lively community that is comfortable with wide-ranging generations.”

The city has attracted many new residents, achieving one of the highest growth rates in Japan.

In 2014, the city of Beppu, Oita Prefecture, enforced an ordinance to “allow people with and without disabilities to feel comfortable and safe.”

The non-profit organization Jiritsu Shien Center Oita, which was started by people with disabilities, promotes universal tourism, providing relevant information and assistance to those with disabilities when they go to tourist destinations.

“To create a diverse and respectful community, it is necessary to have more people who can act as bridges,” said Yoshihiko Kuroda, a professor at Sugiyama Jogakuen University and specialist of regional community studies.

“It is also important to develop a system in which foreign nationals, the elderly and people with disabilities can all make contributions as members of the community.”