ISLAMABAD – Pakistan Tehreek-i-Insaaf Chairman Imran Khan on Wednesday asked the judiciary to explain why it felt the need to open its doors at midnight on Saturday, hours before he was ousted from the prime minister’s office via a successful no-confidence motion against him in the National Assembly.

With the deadline set by the Supreme Court to hold voting on no-trust move fast approaching after a marathon NA session last Saturday, the apex court and the Islamabad High Court (IHC) had opened their doors beyond their notified timings. The vote was eventually held and saw Khan voted out from the top office.

The IHC has since explained that “as a constitutional court, it ensures that cases relating to extreme urgency are presented at any time after the notified timings.”

The high court’s decision to resume court activity at the unusual hour came after a pre-emptive petition was filed asking the court to restrain Khan from de-notifying Gen Qamar Javed Bajwa as chief of the army staff. The then government had denied having any such plans.

Khan today, in what was his first public address since losing his government, directly addressed the judiciary, and asked: “My dear judges, my judiciary, I have spent time in jail because of your freedom because I dream that one day the judiciary would stand with the weak people of the society, and not the powerful.

“I ask the judiciary that when you opened the court in the dead of night … this nation has known me for 45 years. Have I ever broken the law? When I played cricket, did anyone every accuse me of match fixing?

“During my 25 years of politics, I have never provoked the public against state institutions or the judiciary because my life and death is in Pakistan. I ask you, what crime had I exactly committed that you opened up the courts at midnight?”

Khan addressed his successor and newly appointed prime minister Shehbaz Sharif and told him to stop the harassment of PTI supporters. “This crackdown that you’re doing against our youth over social media … listen to this clearly … the day we give the call, you would not find a place to hide.”

The former prime minister asked security institutions if the country’s nuclear assets would be safe under the leadership of the Sharifs-led government.

Earlier, in his opening remarks, Khan said: “Whenever a prime minister of Pakistan was removed, people used to distribute sweets. But I am thankful to God that I was removed and you all came and gave me such respect.

Khan said that the “decisive moment” has arrived and the nation needs to choose if it wants slavery or liberty. “Do we want to be the slaves of the US’ slaves or do we want real freedom?”

Khan said that the Americans have “disrespected” Pakistan by “imposing outlaws” on this nation. “I will go to every city of the country … and I challenge to them that they would have never seen the kind of mobility of the public the way I would do.”

The PTI chairman accused newly appointed Prime Minister Shehbaz Sharif of being involved in corruption to the tune of Rs40billion.

He told his audience of supporters that he would be in Karachi on Saturday and urged them to take the streets in the entire country.

“My youth, get ready, I will be out on the streets with you in every city until we do not force them to hold elections,” he said.

“Today marks the beginning of the struggle to find actual freedom,” he added.

Footage shared by the PTI showed a throng of people at the rally’s site.

PTI leader Shibli Faraz, earlier today, said that Khan would make important announcements at the rally and take the nation into confidence on the party’s future roadmap. 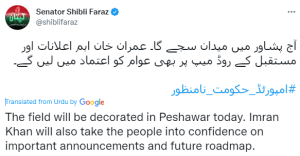 Meanwhile, PTI leader Shireen Mazari alleged that coverage of the rally was being blocked on the orders of Prime Minister Shehbaz Sharif’s new coalition government.

According to the PTI, the Peshawar rally is expected to kick off a new series of demonstrations with one scheduled on Saturday for Karachi as well.

Karachi Jalsa on Saturday April 16th to reiterate that the Imported Government will never be accepted by the Pakistanis! #امپورٹڈ_حکومت_نامنظور pic.twitter.com/9ZU8fHsVOG

Khan had tweeted that Sunday marked the beginning of a “freedom struggle” against what he called a “foreign conspiracy of regime change”. In an attempt to galvanise his supporters, he had said “it is always the people who protected their own sovereignty and democracy.”

Pakistan became an independent state in 1947; but the freedom struggle begins again today against a foreign conspiracy of regime change. It is always the people of the country who defend their sovereignty & democracy.