TOKYO – With North Korea stepping up its launching of ballistic missiles in Japan’s direction, local governments nationwide are rushing to designate facilities to serve as temporary evacuation sites in cases of emergency.

About 52,000 public facilities have been so designated for protecting residents from blasts and other fallout from missile strikes, but the problem at hand is that public awareness of the locations and the setting up of systems for their use have not kept pace with the selection process. 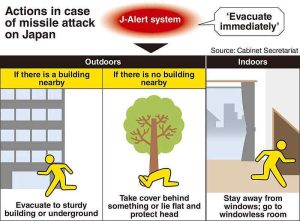 The Cabinet Secretariat lists the names and addresses of the evacuation shelters on its website. Yet, in very few cases is there a sign on the building that it has been designated for this purpose.

On Thursday morning, 36-year-old company employee Masaei Igarashi was at home in Niigata when he was informed of a North Korean missile launch by the J-Alert national instantaneous warning system through his smartphone.

He knew to keep away from windows, but never thought about evacuating from his home. He had never heard the term “emergency temporary evacuation site,” much less knew where one was.

The closest one to his home is the administrative office of the Niigata Prefectural Sports Park, where he often takes his child to play. But there is no sign or anything else indicating its use for that purpose.

“With no sign showing that this is an evacuation site, we can’t act when the time comes,” Igarashi said.

As of April 1 last year, the Niigata prefectural government had secured 1,346 locations as emergency evacuation sites, but the installation of signboards has not progressed.

“We want the national government to specifically state how we should inform the public,” said an official of the prefectural government’s crisis management division. “If we have to install signs, there is also the concern about the costs.”

The Cabinet Secretariat said it is “currently looking into the use of pictograms to identify the evacuation sites.”

The government has set until the end of fiscal 2025 for the period to make a concentrated effort to secure emergency temporary evacuation sites. However, the snag of setting up a system for accepting evacuees has also emerged.

“The entrances to schools are locked during the day for security reasons,” said the vice principal of an elementary school in central Tokyo that is a designated evacuation site. “It would be difficult to immediately accept residents who are evacuating.”

According to the Cabinet Secretariat, the government has not prepared a manual for the operation of the emergency evacuation sites.

At a Tokyo elementary school in another ward, the vice principal said, “If a major earthquake hits, the local disaster response team is supposed to unlock the entrance of the school building. But we have never discussed with teachers the process for accepting [evacuees] in the event of a crisis.”

Since May, 58 underground Tokyo Metro subway stations have been designated as emergency temporary evacuation sites. In case of emergency, they can hold a large number of evacuees. However, “We have not yet decided what station staff will do at such times,” a Tokyo Metro official said.

Likewise, the Toei Subway has 57 of its stations designated as evacuation sites, but has not yet decided how to respond to contingencies.

“Even a single missile attack can cause an infinite variety of damage, depending on the type of warhead, the circumstances of the explosion and how often the attack is repeated” said National Defense Academy Prof. Naofumi Miyasaka, an expert on civil protection administration.

“It is impossible to hypothesize every possible situation. As such, it is rational to first improve operational aspects, such as making use of existing facilities and repeatedly conducting evacuation drills. 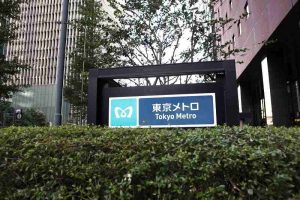