TOKYO – Level 4 automated vehicle networks are currently being tested across Japan as a potential means of public transportation, especially in rural areas with declining and aging populations.

A six-seater electric vehicle shaped like a golf cart was driving along a road at the speed of a bicycle on Wednesday morning in Eiheiji, Fukui Prefecture, where a level 3 vehicle trial is currently underway.

Sitting in the driving seat was vehicle operator Harua Igarashi, but she was not using the steering wheel, nor did she press the gas pedal or brake.

The car moves forward and around curves automatically, using sensors that detect the magnetism emitted from induction wires embedded in the road surface.

“It’s a convenient way to get to the station or temple, and it’s nice to be able to relax and take in the scenery,” said local resident Miyako Tanaka, 91. 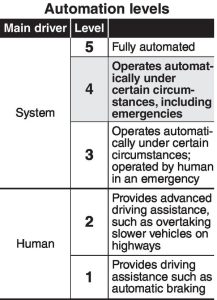 The town began field tests in fiscal 2018, utilizing the site of an abandoned railroad line to connect a 6-kilometer section between Eiheiji Guchi Station and Eiheiji temple. The cars make several round trips every day.

Currently, such field tests are being conducted in more than 15 areas. The government hopes to roll out the system in more than 40 locations nationwide by fiscal 2025, but dispelling fears of accidents will be a challenge.

According to the National Police Agency, there were 14 traffic accidents involving self-driving cars over a six-year period in areas where tests are being conducted.

Thirteen of the accidents resulted in no injuries. At the athletes’ village of the Tokyo Olympics and Paralympics last August, a visually impaired judo athlete was slightly injured in an accident involving an automated vehicle on a pedestrian crossing.

Koji Nakayama, an expert on automated driving systems and a professor at Meiji University, said “Operators and host municipalities need to provide detailed information to residents and drivers about the safety of the system.”