TOKYO – Japanese companies operating in Ukraine have been pulling out employees and taking other precautions as tensions mounted with Russia.

Although Japan’s economic ties with Ukraine are weaker than those with the United States, Europe and Asian nations, the earnings of companies with important markets in Russia and the surrounding region could suffer a blow. Ukraine and Russia are major grain producers, so there are concerns that increases in grain prices on the international market could lead to higher food prices elsewhere.

Many companies doing business in Ukraine are scrambling to collect information and ensure the safety of their employees.

Keidanren (Japan Business Federation) Chairman Masakazu Tokura said Japanese companies have business projects in Ukraine and have been stepping up their activities there, so the rising tensions could have a “considerable impact” on them. “We’re carefully watching the situation with the utmost concern,” Tokura said at a press conference Monday. 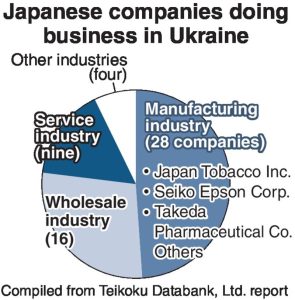 According to Teikoku Databank, Ltd., 57 Japanese companies were operating in Ukraine as of January. Twenty-eight companies were in the manufacturing industry, including Japan Tobacco Inc., Seiko Epson Corp. and Takeda Pharmaceutical Co., and 16 — including Mitsubishi Corp. and Sumitomo Corp.— did business in the wholesale industry.

JT operates a tobacco plant in central Ukraine that produces Camel and other brand name cigarettes. None of the plant’s about 900 employees are Japanese, and some reportedly have already been evacuated to other nations. Russia and neighboring countries are important markets accounting for almost 20% of JT’s overall profits.

“We’ve simulated how we’ll respond to whatever situation develops,” JT President Masamichi Terabatake said at a press conference on Feb. 14.

Ukraine has been nicknamed “the Silicon Valley of Eastern Europe” because it is home to many information technology companies. About 7,000 people work at the Ukraine development base of GlobalLogic Inc., the U.S. IT company Hitachi, Ltd. bought in 2021. The company devised a plan that would consider, if the situation deteriorated due to a Russian military invasion, evacuating these employees to a nearby nation and continuing business operations there.

Rakuten Group Inc. has an office in the southern Ukraine city of Odesa and is involved in businesses including advertising and video streaming services. “The safety of our employees in Ukraine is our top concern,” a Rakuten representative said. “We’ll provide proper support to confirm they are safe and to continue our operations.”

Panasonic Corp.’s distributor firm in Ukraine sells telecommunications equipment and home electrical appliances. One Japanese employee was posted there, but they have already returned to Japan in line with a Foreign Ministry evacuation advisory. Local employees are continuing to work from home due to the ongoing novel coronavirus pandemic.

Many of the major trading companies selling automobiles, chemicals and agricultural materials in Ukraine had several Japanese employees stationed there. All have evacuated to nearby countries or back to Japan. The scale of business operations in Ukraine is small, so the impact “won’t be big,” a source at one trading company said, sharing a widely held view.

Japan Foreign Trade Council Chairman Ken Kobayashi, who also is chairman of Mitsubishi Corp., said, “I’m concerned about the threat of war, and also about the impact that inflation fueled by tighter global supplies of natural gas and crude oil could have on the economies of Japan, Europe and Russia.”

Ukraine and Russia are major grain producers. Japan imports wheat from the United States, Canada and Australia, but does not purchase any from Ukraine or Russia. However, if international cereal prices increase as tensions mount, the ripples could be felt in Japan, which imports 90% of its wheat.

According to the Agriculture, Forestry and Fisheries Ministry, wheat prices on the international market in late January had climbed about 4% from the end of 2021 due to a combination of the Ukraine situation and a cold snap that gripped central and western parts of the United States.

“If raw material costs surge in the event of a contingency, we may consider reviewing our prices,” an official at a major food manufacturer said.