SEOUL – Less than a month after making her debut, Kim Ga-ram of rookie girl group Le Sserafim halted all her activities as bullying allegations against her escalated.

On May 20, the sextet’s management company Source Music announced the singer’s temporary suspension via the group’s fan community platform Weverse.

“After discussing with Kim Ga-ram, she will take a break to ease her mind. … Le Sserafim will continue its activities as a five-piece act until she returns,” the official statement read.

The decision comes a month after several online users, claiming to be her former classmates, alleged that Kim had bullied classmates who didn’t treat her well during middle school and accused her of underage smoking.

But as Kim’s allegations continue to surface, more people have lambasted the company’s response to the bullying controversy. The agency has denied all allegations and said it would take legal action against those spreading false information with “malicious intent.”

“If you are going to sign an artist, you need to know the good, the bad and the ugly, if there are. Nurture your artists. Don’t erase their past,” one fan wrote on Twitter anonymously.

Another fan said the agency’s denial only served to recover the singer’s damaged reputation.

“Companies try to patch up the situation by denying. But I think they should be punished for protecting the wrongdoers, and celebrities must not be allowed to appear on television since an indefinite hiatus is the biggest punishment one can get,” 14-year-old Namgung Yu-jin said.

The company’s denial has prompted more claims to surface. Earlier this week, an anonymous user uploaded a new picture online accusing the rookie singer of being a perpetrator of school violence. The document showed that a committee was called to deal with the case and recommended measures to deal with the offender, who was named as “Grade 1 Class 3 Kim Ga-ram.” 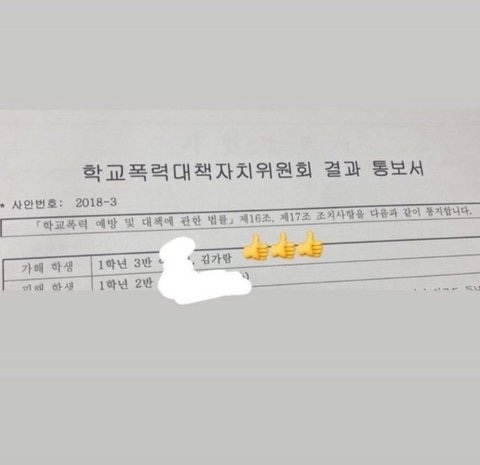 The picture shows a document issued by the Autonomous Committee for Countermeasures against School Violence that alleges Kim Ga-ram of girl group Le Sserafim was a perpetrator of school violence. (Screenshot captured from Nate Pann)

Experts said agencies should take extra care when responding to bullying rumors and resist the urge to sweep everything under the rug to protect their artists.

Noh Yuun-ho, a lawyer who specializes in school bullying cases, said entertainment companies need to learn to deal with it in a sensitive manner.

“It’s understandable that companies respond this way because they need to keep their businesses going, but they shouldn’t make it hard for victims to come forward. If they continue to respond in silence or take legal action, the voices of the victims will never be heard,” Noh told The Korea Herald. “There’s no exact answer in handling the allegations, but companies must accept the singer’s wrongdoing first and later help the victims recover from the past and deliver a sincere apology by taking full responsibility.”

In Korea, where fans often hold K-pop singers and celebrities in high regard and expect them to have pristine records, past bullying scandals have put some singers’ careers on brakes, with agencies worried that they would be indefinitely “canceled.”

Last year, Soo-jin of (G)I-dle was embroiled in a similar scandal. Cube Entertainment, then Soo-jin’s agency, had initially denied the accusations against the singer and said it would take legal action against those who spread false rumors.

But two days after the report broke out, Soo-jin took to the band’s official fan cafe and opened up about the allegations. The singer admitted that she had smoked a few times in school in the past, although she dismissed claims of committing violence. The backlash against the label’s denial was swift, leading Soo-jin to depart from the band and the company.

Hyun-jin of boy band Stray Kids, after the agency’s denial, also admitted to rumors that he had been verbally abusive to his peers during middle school. He uploaded a lengthy handwritten apology on Instagram, owning up to his past mistakes.

“Whether it was intended or not, I don’t think I can be forgiven at all for giving unforgettable pain to someone,” he wrote, admitting that he didn’t know how to be considerate about his actions and potentially hurt other people’s feelings.

An official at the Blue Tree Foundation, an institution for victims of school violence, said K-pop labels need to do better in handling such public relations crises.

“Victims revisit their painful memories through public disclosure, but agencies try to dismiss the scandal by saying there’s a lack of proof since it’s hard to look into a case that occurred before debut. This could hurt the victims and be secondary crime victimization,” the official said. “The victims wouldn’t have to go through hard times if companies had properly addressed the allegations in the first place. Agencies should listen to the voices of the victims, not celebrities who belong under them.”