PHNOM PENH – EdoEyen, an online jewellery brand inspired by Khmer art founded in June, 2020 by sisters Edo and Eyen, has partnered with the Smithsonian Museum of Asian Art to sell their pieces in the museum’s gift shop.

The partnership is centred around the groundbreaking Revealing Krishna: Journey to Cambodia’s Sacred Mountain exhibition – an immersive presentation of the story, context and restoration of the Cleveland Museum of Art’s Krishna statue – which originally came from Cambodia’s Phnom Da.

The statue isn’t considered a looted or stolen artefact – like so many others that have made recent news – because it was removed from Cambodia way back around 1912 and then legally obtained by the Cleveland Museum of Art decades ago.

In fact, Cambodia’s Ministry of Culture and Fine Arts collaborated with the Cleveland Museum of Art on the Revealing Krishna exhibition and even loaned them additional statues for it.

The exhibition showcases these monumental ancient Khmer sculptures and focuses on the museum’s statue of the Hindu god Krishna lifting Mount Govardhan to protect his people from a torrential storm sent by an angry rival. 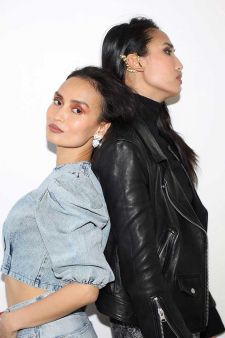 Beyond their cultural heritage, Cambodian-American sisters Edo and Eyen Chorm have strong career and educational backgrounds to help their business succeed. Edo studied at the Fashion Institute of Technology and Eyen found success as a model.

Their Khmer art-inspired jewellery was initially for sale as part of the exhibition in Cleveland, which ended on January 30, 2022. Now, however, the exhibition is headed to the prestigious Smithsonian Institution’s National Museum of Asian Art in the US capital of Washington DC, where it will be viewed by a much larger audience – as will their line of jewellery.

“We were very honoured for the opportunity we were given in partnering with the Cleveland Museum of Art to retail some of our pieces at the museum and now we’re excited to be doing the same thing with another much larger museum – the Smithsonian’s National Museum of Asian Art.

“The feedback at the Cleveland Museum was amazing. Sales were at the expected rate for jewellery pieces within our price range. The 18k gold plated aroubei rings are now sold out and the ear cuffs –specifically the 14k rose gold plated brass was very well received at the museum! And our jewellery will remain on sale at the Cleveland Museum of Art’s store,” Edo, the elder of the two sisters, tells The Post.

Their pieces were originally only available through their website and then at the Cleveland Museum of Art with the opening of the Krishna Revealed exhibition, but now they will also be sold in gift shop at the Smithsonian’s National Museum of Asian Art beginning on April 30, 2022, in support of the exhibition’s move there.

The Smithsonian Institution is the world’s largest museum, education and research complex with 21 separate museums focused on different topics – including the National Museum of Asian Art.

“We are ecstatic and very grateful to be partnering with another museum – and it’s the Smithsonian no less! However, we also must remain humble as we know we haven’t reached our final goals yet. Right now, we are on a journey to expose Americans to Khmer art and culture through our jewellery. It may be a long journey and we’ve only just begun but every step of the way is always exciting for us,” says Eyen.

The New York City jewellery brand sells statement pieces featuring design patterns of ancient Khmer stone carvings – similar to those found on the exhibition’s monumental sculptures. Each piece from EdoEyen’s collection embodies an authentic Khmer aesthetic and pays homage to the unknown ancient artists and sculptors of Cambodia’s past eras. EdoEyen’s jewellery has been featured in national and international publications such as WWD and JCK Magazine, Fashion Magazine and others.

“With the Smithsonian National Museum of Asian Art, we hope it will be well received and that museum-goers will find our jewellery unique and beautiful enough to take home with them, especially after they have seen the groundbreaking Krishna exhibition,” Edo says.

Made in New York City’s diamond district, the pieces from the Face and Hand collections will be available for purchase at the Smithsonian museum’s store beginning at the end of April and will remain available, at minimum, for the duration of the Revealing Krishna exhibition, which runs to the end of September, 2022.

“We are working closely with the museum’s store to forecast which pieces will appeal to the shoppers visiting the Smithsonian, so we shall see,” says Eyen. “We are also talking with the museum about other venture opportunities, so we’re excited about that too.”

The last time the two sisters talked to The Post they were designing necklaces that will be part of their upcoming Body collection. Although they don’t have a date yet for the launch of their necklaces, they are working on getting mock-ups of the design illustrations made now. 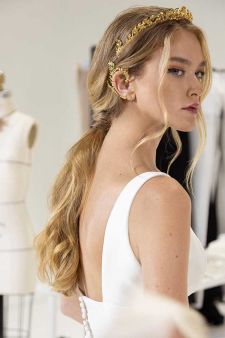 They also haven’t launched all of their pieces from the Hand collection yet, which is another project they are working on currently. With the creation of the necklaces, Edo says they have to be mindful throughout the entire process in order to be certain they are creating a design that no one else has done before.

Eyen says if they don’t stay focused on that, the R&D process can become expensive really quickly. And since they’re self-taught they have to be cautious with their approach and constantly learn a lot of new things on the fly as they go.

“We want to encourage our fellow Cambodians to help support the preservation of Khmer art through educational endeavours like attending the Revealing Krishna exhibition. It should be important for Cambodian-Americans – especially those living on the East Coast – to make a trip to the capital to see it!

“Power in numbers can’t be underestimated. The more we support our cultures’ work in the US, the more it will become relevant there and that in turn will help propel this style of art and Cambodia itself into the spotlight, deservedly, and in a positive way,” she says.