KUALA LUMPUR – Malaysians are still wasting plenty of food, despite having to fork out more money for meals nowadays.

This number is out of the total 38,219 tonnes of solid waste generated in Malaysia every day in 2021.

To put it simply, about 10% of the garbage we throw out every day is food that can still be eaten.

Such numbers are based on the latest data from the Solid Waste Management and Public Cleansing Corporation (SWCorp) made available to The Star.

“Most (76%) were inedible like bones and fruit skin, while the remaining 24% could still be consumed like leftover meat and vegetables,” SWCorp said.

Nevertheless, the amount of food thrown out last year was slightly less than the 17,041 tonnes per day recorded in 2020.

Previously, it was reported that Malaysians produced food waste that can fill seven Olympic-sized swimming pools every day.

From this number, around 4,089 tonnes are still edible and enough to feed three million people three meals per day.

With the pricier food sold these days, SWCorp urged the public to plan their meals and purchases. 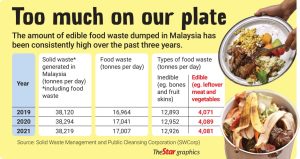 “Check your refrigerator before shopping to avoid buying food you already have.

“Keep and arrange food according to the ‘first in first out’ concept by labelling the food items with the date you keep them and put the earlier ones in front or on top so that you will use them first,” said SWCorp, which regularly implements awareness programmes through its “Value Food No Waste” campaign.

It also advised consumers to keep fruits like bananas, apples and pears away from other produce as they release ethylene gas as they ripen, making other nearby products ripen, and potentially spoil, faster.

On handling leftovers, SWCorp said the public could repurpose such food into new meals, share or donate it or create compost with it.

Although it is degradable, the big pile of food waste is bad for the environment.

Malaysian Nature Society president Prof Dr Ahmad Ismail said most food waste would end up in landfills, where it would be degraded but emit greenhouse gases like carbon dioxide and methane.

“Such gases contribute to climate change and might cause temperature to increase,” he said, adding that about 7% of greenhouse gases produced globally was due to preventable food waste.

Degraded food wastes could also produce leachate and contaminate underground water and aquatic ecosystems where landfill sites were, he added.

“Malaysians must save their food. By managing our food consumption, we will not just save our environment but also our pockets,” he said.

Prof Ahmad said agricultural practice and products must be controlled in line with local demand and export to deal with the current food supply and pricing issues.

“More campaigns to educate the public on managing our food need to be carried out,” he said.

He added that such educational campaigns could begin with children at school canteens to encourage them not to waste food and keep food waste in the right place.