DHAKA – A mandolin instrumentalist, vocalist, and folk artist, Abul Shama grew up in Myanmar’s Rakhine state. He fled his home in August 2017 during Myanmar’s brutal campaign against the Rohingyas, becoming a resident of Camp 15 in Ukhiya, Cox’s Bazar. Since then, Abul Shama has been performing local Rakhine songs on different occasions in the Rohingya community, aided by his local, hand-made mandolin. The symphony of his peaceful voice and mandolin can often be heard drifting across the camps. Many of his songs depict the suffering of the refugees, so many are able to feel a heartfelt connection with his music.

“I am trying to draw inspiration and express the sufferings of the Rohingyas through music for the next generation, so it becomes possible for them to comprehend how we are living through these tough times,” said Abul Shama, holding his mandolin. “When I play music, children surround me and show their interest in learning it. It gives me a real sense of fulfilment to be an authorised music teacher in the camp. It is like a recognition of the work I have been doing since my days in my home country. I am happy that now people know me, respect me, and love spending time with me, but I am happier when I see children exude confidence by learning music.”

In addition to teaching, Abul Shama is also an expert in making mandolins by using locally available raw materials. This helps to meet the demand for music instruments at the refugee camps at a low price, as well as supporting his livelihood.

Why is this important? The Rohingya exodus, the result of a military campaign by the armed forces of Myanmar that has been described as ethnic cleansing, is a huge source of trauma for the Rohingya refugees. It is especially troubling for children, youth and adolescents, who are living in adverse circumstances and with great uncertainty hanging over their heads. It is not uncommon for them to suffer from grief, dread, a crisis of confidence, an unconscious belief in lifelong defeat, and an intense feeling of being unworthy. In these circumstances, practising music can bring with it a sense of peace and a platform to share emotional experiences.

And it is all the more special because the music directly speaks to their lived experiences. Forcing refugee children to practise music that is unfamiliar to them and has not been developed in their culture can lead to difficulties in learning – especially if they can’t relate to the music and it doesn’t touch them personally. It is important for them to practise music that will expand their scope of learning and preserve their culture. Therefore, like Abul Shama, a number of music gurus from the refugee community are teaching music to the Rohingya children. 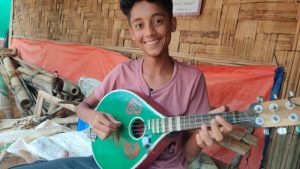 Being able to learn and play mandolin has helped this Rohingya refugee boy look beyond the trauma of being forcefully displaced for his homeland. PHOTO: COURTESY

This intervention was designed so that Rohingya youth could develop their culture without any disruptions to their practices and way of life. The aim is to remove hostility and construct harmony, build cultural bridges by exchanging social values and norms, and engage both the Rohingya refugees and host community through arts, media and culture in the hopes of increasing human security and social cohesion. Gorai Films, in collaboration with Unicef, is working on this.

“I used to teach mandolin to the people who came to me and showed an interest in learning it. Now, I teach music to more than 30 children. It makes my heart tranquil that I am representing my own community,” according to Abul Shama.

In a small, dark shack, Anwar’s eyes light up as he explains how his newfound identity as a music teacher brought him peace in the darkest of times, when the Myanmar military’s crackdown turned his life upside down. Mohammed Anwar voluntarily learned mandolin from Abul Shama back when they were both in Myanmar. After the tragedy, he fled to Bangladesh and was reunited with his music guru. He regained some of his tranquillity by making mandolins and practising music to express himself.

“I used to learn from my guru, Abul Shama, since our days in Rakhine. I am not a good singer, but I can play this instrument very well. I am happy that I have been reunited with my guru again through this art collaboration initiative. It is also a recognition of musicians. This recognition is the best thing that happened to me ever since I fled to this country,” Anwar said while connecting the wires of a mandolin.

There is no denying that music can change even the bleakest environment. When we witness children and youth learning music from Shama and Anwar, we see in them a rare hope, a confidence that humanity can be reached through music. They are able to portray their pain and sufferings through a beautiful medium, and also translate it into an homage to their homeland, expressing their heartfelt wish to return home with music as the vehicle. What can be more beautiful than this?