MANILA, Philippines – The government is working “double time” to ramp up support for the local salt industry following reports of rising prices due to thinning supply in various parts of the country, Press Secretary Trixie Cruz Angeles said on Monday.

In a statement, Angeles said different national government agencies would work closely to enhance the development of the local salt industry, describing as “an unfortunate incident” the fact that the country imports 93 percent of its salt requirements despite having 36,000 kilometers of shoreline.

Angeles said the Department of Agriculture (DA), currently headed by President Ferdinand Marcos Jr. as concurrent secretary, would be implementing initiatives and measures to boost production and supply the requirements of both commercial and industry users.

Agriculture Senior Undersecretary Domingo Panganiban said the government would have to earmark about P500 million to revitalize the salt industry.

The DA, through the Bureau of Fisheries and Aquatic Resources (BFAR), would lead various research and development activities and provide technical assistance to marginal and artisanal salt makers, according to Angeles.

She recalled that last year, the BFAR had set in motion a P100-million Development of the Salt Industry Project (DSIP) under the Special Budget Request of the Congressional-Introduced Initiative Project.

Covering Regions 1 (Ilocos), 6 (Western Visayas), and 9 (Zamboanga Peninsula), the DSIP aims to increase salt production and produce excellent quality of salt through the enhancement and improvement of the different methods and practices in production as well as compliance with food safety standards.

The project is jointly undertaken by the BFAR central and regional offices and the National Fisheries Research and Development Institute.

Angeles said that DA would also look into the expansion of production areas and the development of technologies, including evaporation systems and the use of modern machinery, to accelerate the production of salt.

Failure to adapt
Facilities for processing, packaging and value-adding would also be provided to marginal salt makers under a cosharing agreement, she added.

The DA would also collaborate with national agencies, including the departments of environment and natural resources, and of trade and industry to further enhance the local salt industry, Angeles said.

Angeles said a number of factors contributed to the decline in the production of salt, including low quality control and stunted product improvement for many years.

She said limited development, including the lack of innovation and interventions, as well as low enterprise and investment opportunities, also led to the decrease in salt output.

She added that the sector failed to adapt to the challenges caused by global climate change, food safety standards and quality requirements, and tariff reduction, and meet the mandatory requirements of Republic Act No. 8172, or the Act for Salt Iodization Nationwide (Asin law).

The law requires the addition of iodine to all salt intended for animal and human consumption as part of government efforts to eliminate micronutrient malnutrition in the country.

The Department of Environment and Natural Resources and other government agencies are required under the Asin law to identify areas suitable for use as salt farms and to protect such locations from environmental risks to ensure the sustainability of iodized salt production.

The law also mandates the Department of Trade and Industry to assist and support local salt producers and manufacturers in upgrading their production technologies to include iodization by helping them obtain low-interest loans and financial assistance for the procurement of the needed machines, packaging equipment and technology, and fortificant, and by ensuring a systematic distribution of iodized salt in the market.

Gradual decline
In 1990, salt production in the Philippines was a thriving industry in Bulacan, Pangasinan, Occidental Mindoro, Las Piñas City (Metro Manila), and Cavite, and could meet nearly 85 percent of the country’s annual salt requirements.

However, large salt farms in Cavite, Las Piñas, and Bulacan were forced to close down due to seasonal pattern changes caused by climate change, salt producers’ reliance and use of old production methods, and land developments such as bay area reclamation and coastal road construction. Other large salt producers also converted their areas into fishponds and residential and commercial properties in order to create profit avenues.

Occidental Mindoro, once one of the country’s biggest salt-producing provinces, produced and supplied 18 percent or about 60,000 metric tons (MT) of the country’s total yearly requirement of 338,000 MT in 1990. 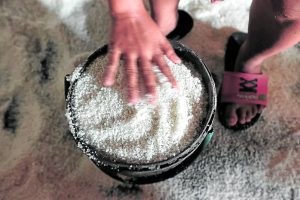 LOCAL HARVEST | Salt is still harvested in small farms in the coastal town of Noveleta in Cavite province. The country has 36,000 kilometers of shoreline but only a few provinces are left producing salt. (Photo by GRIG C. MONTEGRANDE / Philippine Daily Inquirer)