CHINA – In Turning Red, 13-year-old Meilin Lee wakes up one morning to discover she’s turned into a giant red panda. Her parents, especially her overprotective mother Ming, had been waiting for this day, thanks to a family “curse” that sees the women go full panda at some point in their teens when they get too excited. Or moody. Or hormonal.

If nothing else, the latest from Pixar should be applauded for making the onset of menstruation a key plot point. This is the kind of material the studio has hinted it could flirt with — after all, Up pivoted on the disappointment of involuntary childlessness, and Inside Out was a nearly flawless dissection of preteen emotional upheaval — but given the unpredictability of what parent company Disney will find beyond the pale, a period allegory comes as a surprise.

But it’s a welcome one. Rising far, far above its obnoxious trailer, Turning Red presents a welcome new perspective for the coming-of-age movie, set in an unconventional location that immediately suggests a world beyond the usual New York or Los Angeles (in this case, Toronto), and laced with recognizable authenticity thanks to director Domee Shi and cowriter Julia Cho. There are shades of Brave in here, particularly in the film’s depiction of the singular relationship between mothers and daughters; as well as Coco, in the way cultural specificity is mined in the service of storytelling. Kids, especially girls, don’t need to have Chinese parents to understand the more universal dynamics, but little details (like the aunties who descend on the Lees to “help”) are going to speak to Chinese girls and moms that much more. 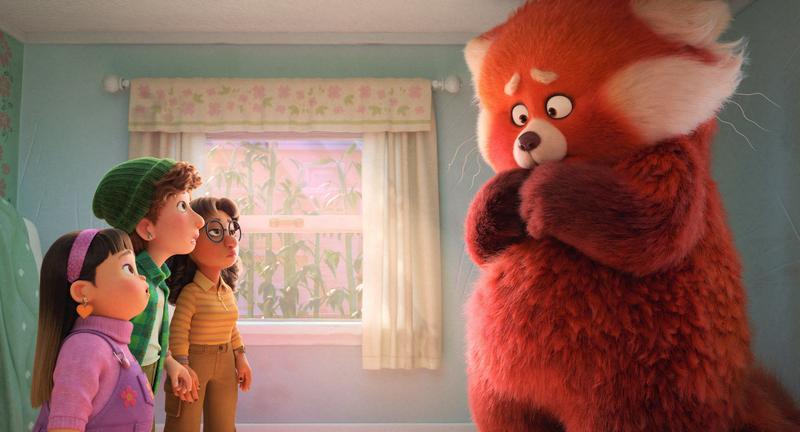 The story opens with an introduction to obedient overachiever Meilin (Rosalie Chiang in her first feature), a relatively well-adjusted teen with a gaggle of mutually supportive gal pals: vaguely tomboyish Miriam (Ava Morse), slightly aggressive Abby (Hyein Park), and goth-girl-in-the-making Priya (Maitreyi Ramakrishnan) — respectively of Caucasian, Korean and Indian ethnicity. Anyone who went to middle school in Toronto will recognize this not as a cynical stab at diversity and inclusion, but as middle school in Toronto.

We also meet Meilin’s nervous and controlling mother Ming (Killing Eve’s Sandra Oh, stealing nearly every scene she’s in), whose job it is to help Meilin come to terms with the curse of their ancestor Sun Yee, and help her through the family ritual needed to banish the beast. Of course there are snags: Meilin finds a way to monetize her inner red panda to fund her and her friends’ admission to boy band 4*Town’s upcoming concert, which clashes with the banishing ritual. Cue family drama.

Shi, who moved to Toronto from Chongqing as a toddler, cut her teeth as a storyboard artist on the aforementioned Inside Out as well as Toy Story 4 before writing and directing her first short, the slight but charming Bao, in 2018 — so she has a firm grasp of Pixar’s brand of visual storytelling (there’s some great costuming work here) and thematic beats. Turning Red is by the numbers: an inkling of youthful rebellion, search for the self, betrayal of friends, new understanding of the mother figure, reconciliation with one’s true self, and finally, acceptance. The ending is never in doubt, but getting there is worth the effort.