The premier arrived in Samarkand today on a two-day trip where he will attend the 22nd annual meeting of the Council of Heads of State (CHS) of the SCO.

On the first day of his visit, the premier met President Vladimir Putin on Thursday. The two leaders discussed bilateral ties and exchanged views on regional and international issues.

During the meeting, Putin said that pipeline gas supplies to Pakistan were possible, revealing that necessary infrastructures were already in place, according to state-owned news agency RIA.

A press release issued by the Foreign Office said that the prime minister expressed satisfaction at the steady growth of Pakistan-Russia relations, which were marked by strong mutual trust and understanding.

“He reaffirmed Pakistan’s commitment to work closely with Russia to further expand and strengthen cooperation between the two countries across all areas of mutual benefit including food security, trade and investment, energy, defence, and security,” it stated, adding that it was agreed to convene the next meeting of the Inter-Governmental Commission (IGC) in Islamabad at an early date.

Furthermore, the premier appreciated Russia’s “constructive role” in Afghanistan and reaffirmed Pakistan’s commitment to supporting all regional and international efforts to stabilize the neighbouring country.

Shehbaz thanked Tajikistan for its support to the flood affectees in Pakistan and shared details of the devastation caused by the massive floods, induced by climate change.

Furthermore, he underlined the importance of regular meetings on bilateral institutional mechanisms and the establishment of mutually beneficial cooperation in the implementation of energy projects.

PM Shehbaz also later attended an informal dinner with fellow state heads of the SCO member nations at the Cultural-Ethnographic complex in Samarkand.

When he arrived in Samarkand earlier today, Uzbekistan PM Abdulla Aripov received the prime minister upon his arrival at the airport.

Shortly after arriving, the prime minister visited Khizr Complex and paid his respects at the mausoleum of Uzbekistan’s first president, Islam Karimov. 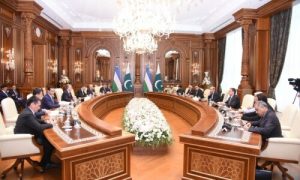 Prime Minister Shehbaz Sharif and President of Uzbekistan Shavkat Mirziyoyev held a meeting on the sidelines of SCO on Thursday. — APP

The meeting focused on strengthening Pak-Uzbek ties in diverse fields for the benefit of the two brotherly nations.

Over the course of his visit, the premier is scheduled to meet other world leaders including Turkiye President Recep Tayyip Erdogan.

An official, when contacted, said though a brief courtesy meeting between the two was possible, they would not be holding talks as none of the two sides had sought a meeting.

Prior to his departure, PM Shehbaz took to Twitter to share his views on the SCO summit.

“The global economic turbulence has necessitated the need for more cooperation among SCO member countries,” he said, adding that the “SCO vision” represented the aspirations of 40 per cent of the world’s population.

“Pakistan reiterates its commitment to ‘Shanghai Spirit’. Mutual respect and trust can be the bedrock of shared development and prosperity,” he said.

“The SCO has great potential to chart a way forward at a time of deeply worrying transformation in geo-political & geo-economic fields,” he concluded.

The premier will be participating in the CHS meeting on the invitation of President of Uzbekistan Shavkat Mirziy­oyev, who will chair it.

They will also approve agreements and documents that would chart the future direction of cooperation among SCO member states.