ISLAMABAD – Power was “fully restored” across the country after a major 12-hour power breakdown took place on Thursday — amounting to 8,000 megawatts, according to the energy minister — depriving large swathes of the country, including provincial capitals Karachi and Lahore, of electricity, according to the Ministry of Energy.

The ministry said the disturbance in two 500kv lines in the south of Karachi was resolved. “Electricity supply is being increased from alternative power plants, which will return to normal by Friday morning,” the ministry tweeted.

However, DawnNewsTV reported that power was still not restored to large parts of Karachi, including Malir, Gulshan-i-Maymar, Super Highway and more.

Earlier, the Ministry of Energy had attributed the breakdown to an “accidental fault” in the transmission system.

“Several power plants in the south are tripping in phases due to an accidental fault in the country’s southern transmission system. As a result, there have been disruptions in the supply of electricity to the country’s south,” the ministry said in a tweet following reports of power outages. At a press conference earlier today, Energy Minister Khurram Dastgir shared the preliminary findings of the circumstances that led to the breakdown.

“This morning at 9:16am, our two 500kv lines in the south — Karachi — there was a fault in both of them. I am not calling it an accident yet, because an inquiry has yet to be conducted. […] there was a fault in them and they fell, as a result, the country’s southern region saw an electricity blackout.

“Our first priority was to isolate Karachi from it, and we were successful in doing so and we isolated Karachi from it by 9:45. By isolate, I mean that the 1,000MW that we provide to Karachi daily, was cut. But KE’s system is independently operated and is supplying electricity to [parts of] the city.”

He said as a result of the two power lines in which the fault developed, parts of Karachi, Hyderabad, Sukkur and Quetta, and partially in Multan and Faisalabad experienced power breakdowns.

Dastgir added that he was personally monitoring the progress of the restoration.

“As a result of this breakdown, a large part of our power plants are out of our system, around 8,000MW, of which we have restored 4,700MW,” he said.

“Electricity has been completely restored in Multan and Faisalabad. There is an issue in Hyderabad, but we have restored Sepco partially till Dadu. There is also [power] connectivity in Shikarpur, and because of partial connections in Sukkur. Qesco has been restored till Sibi.”

The minister said three teams were in the field: one was the reconnection team dealing with the cut-off conductors, the second team was for repairs, wherever needed, and the third team, was the inquiry team, which would submit a report to the ministry of energy in four days identifying the cause of the incident.

“Our biggest success is that we prevented a breakdown in the north. We limited the shutdown to the south through timely reconnection … the north was completely saved from the shutdown.

“We are trying to completely restore the system between maghrib and isha,” he said.

“It is taking time. The power plants that were shut down will take hours to restart. These include coal plants, Thar coal plants and nuclear plants in Karachi, wherever there has been tripping, plants are being restarted according to their technical specifications.

“We expect that those plants will start production in the next few hours, and as I said, we will completely restore the system between 7-8pm. Our priorities at present are [the restoration of power in] Karachi and Quetta and then Hyderabad too.”

He said the tripping developed near Karachi and moved northward. “There are two lines in Karachi’s south — NK1 and Jamshoro — there was a fault in them simultaneously.

He, however, insisted that there was no fault in the system in Karachi, only the transmission of 1,000MW from the national grid had been cut off. “When the plants will be restarted, 1,000MW supply will be restored [to the city].”

“We have to find the actual cause, whether it was an accident or there was another reason.”

High-level committee formed to probe outage
Later in the day, the Ministry for Power constituted a high-level inquiry committee to ascertain facts pertaining to the partial breakdown.

According to an order issued by the National Transmission and Despatch Company Limited (NTDC), the committee will be headed by Muhammad Mustafa — Lahore general manager (technical) — and comprise Anwar Ahmed Khan, Muhammad Ijaz Khan, and Muhammad Zakaria.

On the directions of Minister for power @kdastgirkhan , High level inquiry committee has been formulated to ascertain the facts pertaining to the partial break down. pic.twitter.com/Jrnj9YAawz

It stated that the committee will be required to determine the root cause of the default, ascertain if the faults leading to the blackout could have been prevented, and verify if measures taken by concerned departments were adequate.

The committee will be required to submit a report within four days, the order added.

Senate panel issues summons for KE CEO
Separately, Senate’s Standing Committee on Power issued a summon for K-Electric chief executive officer Moonis Alvi and instructed the police to arrest him and present him at the next meeting of the panel.

“Who is he? A gangster? What is this behavior,” Senator Saifullah Abro, the committee’s chairman, said in a meeting on Thursday.

He said that time had passed but KE had still not managed to prepare an agreement for the purchase and sale of electricity.

The committee also expressed anger over Dastagir’s absence from the meeting and took notice of the electricity breakdown across the country.

He observed that the NTDC had failed to provide adequate reasons for the power lapse. To this, officials of the power ministry said: “The southern parts of the country have been plunged into darkness.

“But sharing details [of the outage] will spread more panic,” they added.

“The work of restoring electricity to residential areas is going on gradually,” Rana said, adding that power was back in Federal B area, Civic Centre, Clifton, Defence, Gulistan-i-Jauhar, Liaquatabad, Lyari and Malir.

Earlier in the day, he confirmed that the utility had received reports of “multiple outages” from different parts of Karachi.

“We are investigating the issue and will keep this space posted,” he said.

There are reports of multiple outages from different parts of the city. We are investigating the issue and will keep this space posted.

In an update posted around 11:45am, he confirmed that the suspension in electricity supply was due to a fault in the southern transmission system, as explained by the Ministry of Energy.

He added that work had been started to restore the supply and the complete restoration would take around five hours.

Meanwhile, the Lahore Electric Supply Company said it was carrying out loadshedding to protect the system from a major breakdown.

“The Ministry of Energy is diligently investigating the cause of the outage and the power system will be fully restored as soon as possible,” it said. 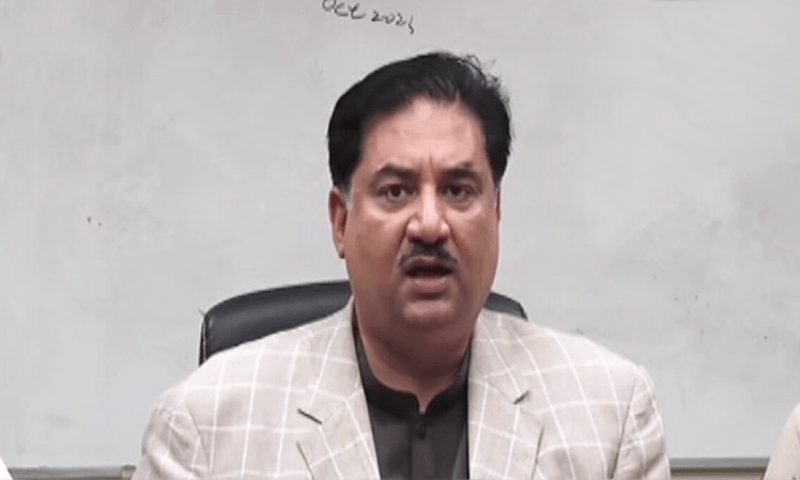