ISLAMABAD – PTI Vice President Fawad Chaudhry said on Tuesday that his party and the PML-Q had decided to remain allies, and face the matters of the vote of confidence and no-trust resolution against Punjab Chief Minister Chaudhry Parvez Elahi together.

On Saturday, PTI Chairman Imran Khan announced that his governments in Punjab and Khyber Pakhtunkhwa will dissolve their assemblies on December 23 to pave the way for fresh elections.

After days of hectic politicking, the Pakistan Democratic Movement (PDM) alliance on Monday sprang its own trap to limit the options available to Parvez ahead of the announced provincial assembly dissolution.

In a double-edged move, Punjab Governor Balighur Rehman asked the chief minister to obtain a vote of confidence from the Punjab Assembly (PA) on Wednesday (tomorrow), while PML-N and PPP lawmakers submitted a separate no-trust resolution against him in a bid to bar him from dissolving the assembly.

Elaborating on the PTI-PML-Q alliance’s response to the development, Chaudhry said during a media talk in Lahore today that his party held its legal committee meeting — which was also attended by senior PML-Q leader Moonis Elahi.

“We have decided that the PTI and PML-Q were and will remain allies and face this vote of confidence and no-confidence together,” he said, adding that the alliance had a total strength of 190 members.

He said the parliamentary parties of the two political entities will hold meetings on Wednesday and Thursday and repose their trust in CM Parvez.

Under the law, the chief minister cannot dissolve the assembly if a no-confidence motion has been moved against him, while the governor’s requirement for the chief minister to seek a vote of confidence from the house means he has to ensure that he manages to secure 186 votes on Wednesday.

The PTI has 177 while the PML-Q has 10 members in the Punjab Assembly. On the other hand, the opposition boasts a combined 176 members from the PML-N, PPP and Rah-i-Haq parties.

Chaudhry also addressed the matter of pending PTI resignations in the National Assembly (NA), saying that the party had started its process of MNAs vacating their seats and called on the NA speaker to accept their resignations.

“We want that there are on elections on the same day for the NA and provincial assembly,” he said.

Separately, in a tweet after meeting Imran, Moonis said that the strategy regarding the dissolution of the Punjab Assembly had now been completed.

“No matter how hard PDM tries, it cannot stop snap elections. Imran Khan will win the next elections,” he added. 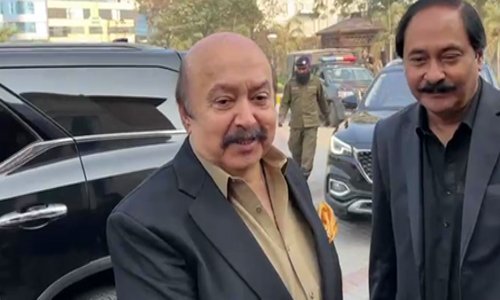 Punjab Assembly Speaker Sibtain Khan speaks to media persons in Lahore. — DawnNewsTV
Speaking to the media in Lahore today, the PA speaker highlighted how the assembly session was only adjourned. “[We] didn’t end the session but adjourned it.

“The Punjab governor cannot take a vote of confidence during an ongoing session of the Punjab Assembly,” he said.

The speaker also said if the governor wanted, he could summon a session but the chief minister would not attend it.