PHNOM PENH – In 2013, a video clip of an 11-year-old girl without limbs – who used the small span of her left “arm” to hold a pen with her neck and practice beautiful Khmer penmanship in a classroom in Battambang province’s Samlout district – won the hearts of netizens all throughout the Kingdom. That video of her has been re-shared every year since then.

That girl is Sen Sreyhorng, who was born with tetra-amelia syndrome – a rare disorder characterised by the absence of all four limbs.

A simple reason motivated Sreyhorng to go to school: “I didn’t want to stay home and be lonely.”

She recalled fond memories of her time in primary school, where, she says, “my friends didn’t bully me because we grew up together in the village”.

But since the video went viral, Sreyhorng’s educational ambitions have become even higher than just to make friends: now, she wants to become a news anchor and inspire those with disabilities to reach for their dreams.

With what she calls the “encouragement and generosity” of people around her, Sreyhorng has stepped out of her hometown in Battambang’s Sung Commune to the bustling capital Phnom Penh to enter university in the hopes of eventually landing her dream job in the media industry.

That dream was a combination of practicality and visibility for Sreyhorng, who has wanted to work in that profession since she was in high school. “Since I don’t meet the physical requirements for other forms of work, I wanted to be a news anchor, where I can use my voice,” she said.

Today, she is an incoming freshman at the College of Media and Communications (CMC) at the University of Cambodia (UC), where she has received a full scholarship.

Someone who does not hide her condition from public view, Sreyhorng is eager to share her story with her peers. “I am very excited to pursue my studies in Phnom Penh since I want to get to know more people and share my experience and how hard my life has been,” she said candidly.

Bun Sophal, Dean of the CMC, was encouraging of Sreyhorng’s career ambitions. “Though she has no arms and legs, she can write and speak. And as she said she wishes, she can definitely be a news anchor for a radio or TV station, where she can make use of her vocal talents. But even if she doesn’t feel confident enough, she could choose to work in a radio studio.”

Sophal said UC has radio and television stations where students can gain first-hand experience. When she gains more knowledge as a sophomore, he expressed confidence that Sreyhorng will be able to find work in many parts of the industry – if not as an anchor, then “a script writer in production, or feature writer, as she can work from the comfort of an office.” Sreyhorng recalled that on the day of her exam, where she competed for a UC scholarship, once she was seen by the university staff, she was “immediately granted” the full scholarship.

During her first month in Phnom Penh, Chheun Chhunly, Sreyhorng’s mother, wheeled her daughter around in her wheelchair to buy food at a street market near the university where Sreyhorng was to spend the next four years. She recalled that they were “not welcomed” by the food vendors.

Speaking to The Post in their rented room in Phnom Penh, Chhunly said: “we were here for just a few days. We felt so lonely. When I pushed her to buy some food, we were not welcomed because they thought we were beggars. It was only after we took out money and handed it to them that they acknowledged we were customers.”

Though Sreyhorng was granted a full scholarship from the university, the mother-daughter duo still depend solely on charity since Chhunly must be by her daughter’s side at all times, while her husband is too old to work and her older daughter, who married her grade 10 high school sweetheart, is raising three children of her own.

Their 10m2 rented room is paid for by “Chek Grandfather”, Chhunly says, who has supported Sreyhorng ever since he saw the viral video of her writing. He visited Cambodia in 2013 just to meet her.

Chek Grandfather is none other than Nick Vujicic, an Australian preacher and motivational speaker who was also born with tetra-amelia syndrome.

Other than Vujicic, Sreyhorng notes that she receives donations from “various sources. We have been using them for me to continue my studies up until today, as I enter university,” she said.

Chhunly laid out the other donations given by her daughter’s benefactors. “Donations from their Excellencies, Neak Orkna and Lok Chumteav, I’ve saved for my daughter’s study expenses. His Excellency, Hor Namhong, has also given regular contributions since 2019.”

Chhunly recalls that the most painful experience in her life – more so than an injury she sustained where she was nearly paralyzed – was during Sreyhorng’s birth 20 years ago, when she saw her baby born without any limbs.

“I felt really sorry for my child. I am not offended or ashamed of anything, I only pitied the child,” she said. “Wherever I went, I took her with me. I thought, ‘I am her mother and I have to be responsible for her’.”

When she was pregnant with Sreyhorng, Chhunly, now 49, didn’t go for checkups, believing that her second pregnancy would be as normal and uneventful as her first. In a period of political and socio-economic instability, poor road conditions in their village at the time left her no choice but to stay at home. Neither did she have any idea where she could find a doctor to do such checks.

“The country just woke up from civil war and our Samlout was the last stronghold of the Khmer Rouge. We ran for our lives to refugee camps in Thailand until, in 1989, we came back and built a shack house.”

She said she didn’t expect that such a rare condition would happen in her family. When Sreyhorng was born, Chhunly decided to dedicate the rest of her life to taking care of her youngest daughter.

Mother becomes her arms and legs

“Though I wasn’t upset about my rare condition, sometimes I was not happy that there wasn’t anything that could be done to improve it,” Sreyhorng said of her lack of ability to be physically independent.

From helping to groom herself to passing things to her, Sreyhorng likens her mother to being her “arms”. “I am very ‘difficult’ because sometimes I need to have a bath, dress up and go to the toilet, and take out my books,” she said.

Traveling to markets, schools and the farm, Chhunly becomes her “legs” to help Sreyhorng reach her destination.

“On weekends I crossed the border to Thailand with my mother to buy food since our village is on the Thai border. Previously my mother bought food from Thailand and sold it in the village. Our neighbours would go to her to buy things,” she said. “When I had free time, I travelled with her because no one was home. When she went to the farm, I tagged along. I went with her unless my sister was home.” 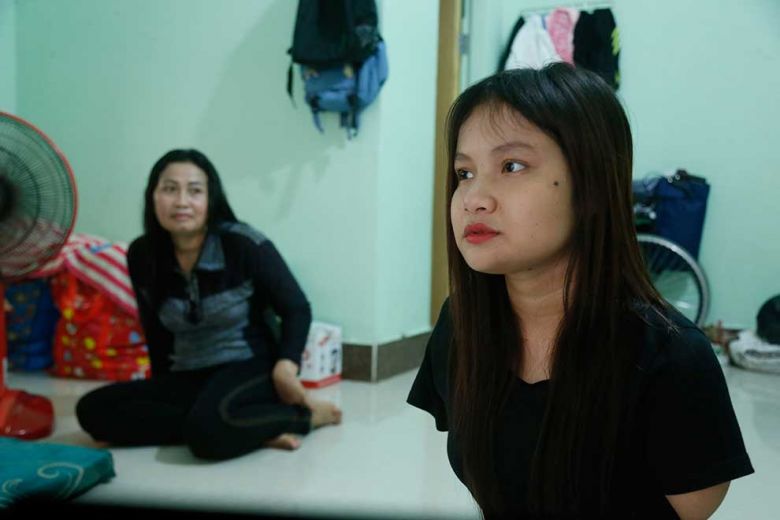 Despite her condition, Sreyhorng has grown into a confident young woman. SUPPLIED

She talks about being afraid of how she will be perceived by an unsympathetic public. “I wouldn’t want to live alone even if I could. I am scared, scared of being hurt because I am a woman living alone,” said the 20-year-old.

Given all this, Chhunly said she didn’t expect that her daughter would enter university, and was planning for Sreyhorng to own and run a small grocery store in their commune.

The proud mother said: “I studied only until grade 2, then Khmer Rouge militants fired at my school and I could not learn anymore. So I am going to take care of Sreyhorng until she graduates. She is the apple of my eye and I would be so happy to be with her for the rest of my life.”

The story of the young woman with tetra-amelia syndrome has gained attention on social media from netizens, some of whom seem bewildered at Sreyhorng’s will to live in spite of the perceived burden she causes on those in her daily life, such as her mother. Some have left comments wondering whether she will be able to find romantic love in her life.

Sreyhorng said she saw a post comparing her plight to that of several young women who recently decided to end their lives at the popular suicide location, the Chhroy Changvar bridge, due to love troubles.

But she isn’t fazed by these posts, and even has words of encouragement for those feeling troubled. “If possible, I want to tell [people thinking of suicide] not to be upset. If you can cry, do that, but don’t think of suicide, because death can’t solve the problem and you can’t get your life back.

“When you are dead, people around you, especially your children, are going to have very hard lives. Though others may blame you for things, you don’t have to care about what they say. You should focus on those who really love you.”

Sreyhorng urged those thinking of ending their lives to consider their loved ones – such as their parents and siblings – who “have always taken care of, and protected them from everything since childhood.”

Tearing up, she said about her mother that “she loves me a lot because even though I was born with an abnormality, she still takes care of me very well and encouraged me to study to get to where I am now [as an undergraduate], and she gave up her job to look after me.

“She provides me with enough food daily. Whatever I want to eat, she finds it for me. I think that is enough for me and I don’t demand more than this.”