COLOMBO – The entire Cabinet of Ministers, including Prime Minister Mahinda Rajapaksa, resigned hours after protests erupted in Colombo, its suburbs and several other parts of the country. Sri Lanka Podujana Peramuna (SLPP) Local Government members and their henchmen attacked those who had been demanding the resignation of President Gotabaya Rajapaksa and the Cabinet of Ministers, including Premier Mahinda Rajapkasa over the current economic crisis.

SLPP mobs destroyed Opposition activists’ constructions and property opposite Temple Trees and then they marched to the Galle Face Green, where they demolished well over a dozen tents. At both places, mobs ,burnt protesters’ belongings while the police made a feeble attempt to rein them in.

Television channels and social media provided uninterrupted coverage of the mob attacks. SLPP activists were shown walking out of Temple Trees and then going on the rampage following a meeting with Premier Mahinda Rajapaksa yesterday (09).

Premier Rajapaksa called the hastily arranged meeting in spite of the promulgation of emergency effective midnight 07 May. 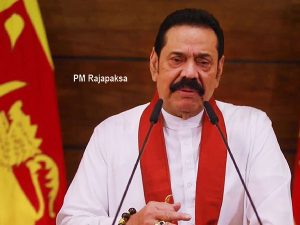 Police at Temple Trees looked the other way as mobs swung into action and cleared the protest site within minutes and marched towards Galle Face. They easily broke through the police line near the Galle Face Hotel and went on the rampage at the Galle Face site. They set fire to a makeshift library.

The police fired tear gas and water cannon at the attackers invading the Galle Face Green with little success. At one point, a Buddhist monk, who had accompanied the SLPP mob, blocked the path of water cannon as goons controlled the protest site. They forced the protesters to abandon the area. About 80 protesters who had been wounded at Galle Face were rushed to the National Hospital.

However, around 2.30 pm- 3 pm, the situation changed with the arrival of large groups of youth and Opposition activists at Galle Face, where they mounted a fresh protest demanding the resignation of the government. The public defied the countrywide curfew declared by the government and large groups of public servants, too, joined the protest. After the arrival of reinforcements, protesters, too, hit back hard. The video footage of some of the attackers caught by the public is now in the public domain. Some of those who attended the Temple Trees meeting earlier in the day were plunged into the Beira Lake.

MPJohnston Fernando’s vehicle was also pushed into the Beira.

Near the National Hospital, medical staff blocked a police jeep. The driver was compelled to reverse the vehicle. Protesting public urged the police and the military not to protect the government.

Earlier, SJB Chief Premadasa and several of his MPs, including Eran Wickremaratne and Mujibur Rahuman had to flee Galle Face when protesters threw various objects at them. Their bodyguards had to evacuate them.

Teacher trade union leader Joseph Stalin, addressing the media at the scene of the incidents said that the SLPP attackers had arrived there with the police. Stalin alleged that the police had actually facilitated the goons operation. Stalin vowed to continue their campaign until the Rajapaksas resigned.

By yesterday evening thousands of people converged on Galle Face, where they demanded the arrest of those responsible for unprovoked attacks on the public. The public protests at the Galle Face got underway on 09 April following 03 April countrywide protest demanding the resignation of the incumbent administration.

The attacks on the anti-government protesters triggered a wave of violence across many parts of the country, and houses of some SLPP politicians were set on fire.

The house of MP Sanath Nishantha seen with the SLPP goons at the Galle Face attack on protestors was set on fire. People who staged a protest in the Arachchikattuwa town yesterday afternoon marched to MP Nishantha’s house and pelted stones at it. Later they set it on fire.

Protesters torched Kurunegala Mayor Thushara Sanjeewa’s house too. There had been a protest in the Kurunegala town earlier in the day to condemn the SLPP goons attack on protestors demanding the resignation of President Gotabaya Rajapaksa at Galle Face.

The protesters in the Kurunegala town later marched to the residence of Mayor Sanjeewa and set it on fire.

Meanwhile, a group of persons set fire to the residence of Moratuwa Mayor Saman Lal Fernando, in Willorawatte.

Former Minister Johnston Fernando’s party office in Kurunegala too had been set on fire.

Former Minister Nimal Lanza’s residence and his father’s house too were set on fire by a mob.

Police said former minister Dr Ramesh Pathirana’s house too had been ransacked and set on fire by a group of unidentified protestors.