BEIJING – A new comedy about a maintenance worker stranded on the moon could see the sector launch back to previous popularity, Xu Fan reports.

The specter of an astronaut stranded on the moon might arouse a sense of panic in many people. However, Mahua Funage-one of the country’s most popular comedy troupes-has turned the idea into a story full of joy.

Moon Man, Mahua’s latest outing in cooperation with China Film Group and Alibaba Pictures, made debut at mainland theaters in multiple formats, including Imax, on Friday.

Despite the sporadic resurgence of COVID-19 in the country, the film grossed more than 210 million yuan ($31.1 million) to top China’s box office charts on its opening day, indicating the potential of the domestic market, according to movie information tracer Beacon.

Adapted from South Korean illustrator Cho Seok’s popular comic series Moon You, the movie shot with a localized script shows Dugu Yue, a spacecraft maintenance man, unintentionally left on the moon after the evacuation of the crew of Lunar Shield, a moon-based project aiming to rescue the Earth from an asteroid strike but ending up in failure due to an unpredicted issue.

Witnessing the catastrophic hit from the moon, Dugu believes the Earth is completely destroyed and he’s the last human in this universe. However, little does he know that the surviving humankind, including the crew’s leader, a woman who Dugu has had a secret crush on for eight years, are all watching his every move from the Earth. One of the movie’s top draws is that it reunites Shen Teng and Ma Li, two of Mahua’s top comedian stars, respectively as Dugu and Ma Lanxing, the commander of the Lunar Shield project.

The reunion occurred seven years after Goodbye Mr Loser, a dark-horse blockbuster that raked in 1.44 billion yuan to become one of the highest-grossing Chinese movies in 2015. The smash hit has seen Shen and Ma join an elite of the country’s most sought-after comedian stars.

Shen has accumulated a huge fan base as he can easily tickle the funny bone of his audience. But his intense schedule-with most of his working time occupied by several popular variety shows-has seen him appear in several films just as supporting characters.

His appearances in these movies are short, for example, five minutes in Never Say Die (2017), three minutes in Hello, Mrs Money (2018) and 10 minutes in Warm Hug (2022).However, the movies casting him all hooked lots of theatergoers, thanks to his popularity. 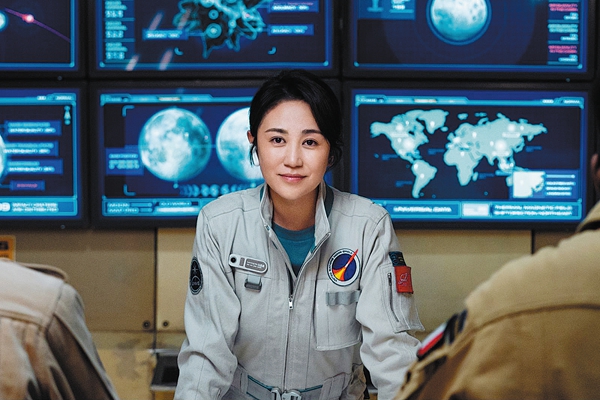 Starring Shen as the stranded maintenance man, the 122-minute Moon Man marks the longest and even the “loneliest” movie Shen has shot during his career spanning nearly 20 years.

“I shot the movie for nearly five months, spending most of my time in soundstages with the walls covered by green cloth (a practice to replace backdrops),” Shen says.

The majority of the film’s around 1,800 special effects scenes were made by artists from More VFX, a visual effects company known for The Wandering Earth and A Writer’s Odyssey. The shooting lasted nearly five months in 15 soundstages which covered an area of 40,000 square meters in Qingdao, Shandong province, according to the producers.

Shen says he was very excited to meet Ma, the lead actress, during the shooting. Soaring as China’s latest box-office champion, the sci-fi comedy Moon Manstars actor Shen Teng as a stranded astronaut in outer space, and actress Ma Li as the commander of a moon-based project.[Photo provided to China Daily]

“It was like reuniting with a relative who has been missing for a long time.”

In the movie, Shen’s character discovers a grumpy kangaroo when he attempts to get a bottle of medicine from the Lunar Shield project’s base on the moon. The kangaroo becomes the only creature that accompanies him on the moon, and even becomes a “friend” that assists him in his efforts to return to the Earth.

The anthropomorphic kangaroo, depicted in the movie as capable of understanding the protagonist’s sorrows and joys, is played by Hao Han, a 30-year-old comedian actor, also with Mahua Funage. The movie blends digital motion-capture technology and the actor’s performance.

Director Zhang Chiyu reveals that Hao prepared for his role-also marking his acting debut in a big-budget movie-for almost a year, by doing many things such as renting an apartment near the Beijing Zoo to observe the kangaroos there for four months and installing wires to practice hops like a kangaroo on the film set. Despite the movie employing advanced cinematic technology, including using virtual cinematography to make the preview scenes easier for actors and actresses to understand their roles’ responses and emotions, the director says the core of the movie is “a comedy”.

“All the tech elements are just the backdrop of the movie. Comedy is a difficult genre, heavily relying on excellent performers’ competence in improvisational roles,” says Zhang, adding that actors Shen and Huang Cailun, also a Mahua Funage comedian, contributed some good jokes.

As a tribute to some influential Hollywood movies, the new film features funny moments inspired by sci-fi classics, ranging from Arnold Schwarzenegger’s The Terminator to Ridley Scott’s Alien, according to some audience members at a Beijing preview on July 24. For some cinema operators and industry insiders, the new Chinese movie, with a popular cast and captivating plot, is estimated to become the next blockbuster that will help revive China’s struggling film industry amid the COVID-19 pandemic.