BEIJING – Chinese striker Tang Kai has vowed to perfect his craft to ensure a long reign in ONE Championship’s featherweight division as the birthplace of martial arts celebrates its first major men’s MMA world title.

Known as the cradle of ancient martial arts, China has finally earned its rightful place at the summit of modern combat sports after Tang dethroned former champ Thanh Le to claim the ONE featherweight belt on Friday. He joins female compatriot Xiong Jingnan, ONE’s reigning strawweight queen, as a champion in the Singapore-based promotion.

Tang, fighting out of Sunkin International Fight Club in Hunan province, insists his mission is far from over.

To bring the championship belt to China, I’ve lived up to my words before the fight, but I won’t stop here. My goal is to retain my title many times to extend my dominance as long as possible.

“To bring the championship belt to China, I’ve lived up to my words before the fight, but I won’t stop here,” Tang said after beating Le via a five-round unanimous decision in the co-main event at ONE 160 in Singapore.

“My goal is to retain my title many times to extend my dominance as long as possible,” said the 26-year-old, who is on a 10-bout win streak and owns an impeccable 7-0 record since signing with ONE in 2019.

“To make myself a stronger champion, I will work harder on my weaknesses in jujitsu, grappling and brawling in particular,” Tang said.

“I will also keep sharpening my punches to improve the effectiveness of my striking.”

Both exceptional strikers boasting high-profile knockouts on their resumes, Tang and Le began the bout more conservatively than expected in what was billed a “battle of KO artists”.

After those cautious opening exchanges, Tang targeted the Vietnamese-American’s legs with low kicks while skillfully evading each time Le looked to engage.

Le finished the second stanza more aggressively with a solid left hook that rocked the Chinese star onto his heels.

After lasting the full 25 minutes, Tang’s overall aggressiveness and pinpoint striking impressed the judges enough to earn the unanimous nod. 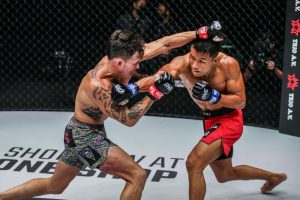 China’s Tang Kai (right) fights with Thanh Le of the United States in a match at ONE Championship in Singapore, Aug 26, 2022. (PHOTO PROVIDED TO CHINA DAILY)

Never one to mince his words, Tang had vowed to send his 36-yearold foe into retirement before the bout but his post-fight interview was full of admiration for Le.

“I must say, Thanh Le is a lot tougher of an opponent than I expected,” Tang said. “I want to thank Thanh Le for putting on such a great show. I didn’t expect at his age, in his 30s, he would have such great stamina. Really respect this opponent.”

Next up for Tang could be the division’s former titleholder Martin Nguyen, who lost the belt to Le in October 2020 in a third-round stoppage, or a rematch against No 2 contender Kim Jae-woong.

Should no clear-cut challengers present themselves, a crossover bout against featherweight champions in Muay Thai or kickboxing under ONE’s system is also an option. Reigning ONE kickboxing world champion Superbon Singha Mawynn of Thailand has expressed a desire to move into MMA.

“Let him try. MMA or whatever rules. I am open,” Tang said of the potential clash with Superbon. “His striking is world-class without question, but he knows nothing as far as the ground skills go.

“If we compete in MMA, I will take him down and finish him on the ground in the second round if he cannot knock me out in the first stanza.”

Born in Shaoyang, Hunan province, Tang signed up for wrestling training at a provincial sports school in 2008, dreaming of becoming an Olympian after being inspired by the Beijing Summer Games.

With the long odds of making it to the national program prompting a rethink, the more glamorous world of mixed martial arts caught Tang’s attention and he embarked on a new path.

After fighting his way to prominence with domestic promotions thanks to his potent striking, clinical takedowns and ground-and-pound skills, Tang accumulated eight stoppage wins to earn a contract with the ONE Championship and kick off his climb up the pro ranks.

Now sharing the role to spearhead MMA’s rise in China with Xiong, who will defend her strawweight title for a seventh time against Singapore’s Angela Lee on Sept 30, Tang is immensely proud to play his part in popularizing the sport in his home country.

“I think no other sports compare with MMA in its unique appeal,” he said. “Hopefully, more people in China will get interested in MMA and start to practice because of what I did.”