When Yang Jinqing takes out his bag of tools, people around him are usually in for a treat. As his fingers dance among the delicate tools, ranging from a mortar and pestle to a ruler and a special knife, that are neatly arranged on a long table, spices, wood powder and paste made out of various plants, such as elm barks, are mixed up and turned into incense of different shapes and sizes.

The man in his 70s executes every move with elegance at his home in Qingyuan district, Baoding of North China’s Hebei province. As he lights up the incense, a waft of soothing fragrance follows in its wake and soon permeates the room. For decades, Yang has committed himself to the traditional incense craft in Qingyuan, which was named a national intangible cultural heritage by the State Council in June 2021.

The whole ritual can only be carried out manually. Traditional Chinese herbs, flowers, sandalwood, cypress and other natural spices are used for environment aromatization, sterilization and deodorization. “My ancestors were all involved in the incense industry,” says Yang.

After the country’s liberation in 1949, Yang’s father was hired by a local production team as an incense processor and salesperson. Initially, Yang did not consider entering the industry, but was persuaded to pick up the necessary skills to earn an income for his family. But, as he made inroads into the trade, he started to appreciate its unique appeal and charm.

Making incense requires many delicate steps and craft, from selecting the raw materials to actually molding the products.

First, one needs to ensure the main spices and the plant adhesives are in the right proportion, so the therapeutical effects can be achieved, Yang explains.

Then, the kneading procedure follows, as water is slowly poured in until a dough starts to form.

“The variations in adhesive viscosity and water usage will both affect the incense quality and are key in the production,” Yang says, adding that the recipes were obtained through years of trial and error.

Next, the dough is further kneaded or squeezed into threads, pills, cakes or cones, before being fine-tuned through clipping.

“It’s necessary since the incense length determines the burning time,” he adds.

The final steps involve drying and cellar storage, which will keep the fresh incense from deforming or cracking and enhance its fragrance.

The country boasts a profound incense history that dates back to before the Qin Dynasty (221-206 BC). The craft and its culture thrived during the Song Dynasty (960-1279) when it was one of the four most popular activities among scholars, on a par with tea ceremonies, ink-and-wash paintings and flower arrangement. 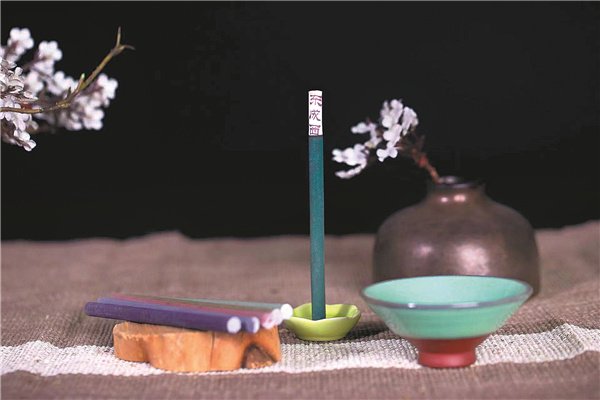 A display of an incense set. [Photo provided to China Daily]

It found wider popularity during the Ming (1368-1644) and Qing (1644-1911) dynasties when it was used to fend off disease, insects, mosquitoes and preserve people’s health.

Since the Han Dynasty (206 BC-AD 220), incense has left its traces in the neighboring area of Qingyuan, when an incense burner was unearthed from the tomb of a Han prince, Liu Sheng, to the west of the district in 1968.

Qingyuan saw many incense workshops set up during the Song Dynasty, thanks to its close geographical location to abundant herbal resources hidden in the Taihang Mountains.

Yang’s family incense business built its name in the region in the 1940s. It was halted for a while but it returned in the ’80s, shortly after the country’s implementation of the reform and opening-up policy.

“I felt the opportunity had finally come,” he says.

Therefore, Yang got down to setting up his own incense business.

He went out of his way to inquire after, and purchase, incense production equipment and raw materials while visiting senior incense masters, from whom he gleaned valuable information. He also made his way to libraries in Beijing to study incense monographs.

When all the resources were ready, Yang experimented over and again before restoring and upgrading ancient incense recipes. His efforts paid off when he managed to present a dozen ancient incenses, including ambergris and those featuring the scents of rose and lily.

Yang also makes sure his products move with the times, rolling out thousands of incense products with a modern appeal.

He has innovated the traditional craft and concocted smokeless incense and developed a legendary product that, after burning, displays auspicious patterns and characters. They have won him multiple national patents.

“They are key to ensuring Qingyuan incense takes the lead in the craft and product quality in the industry,” Yang says.

To date, Yang has fostered long-term cooperation with foreign trade companies in Beijing, Tianjin and Hebei, and his products have made their way to overseas markets, including Singapore, Malaysia, Japan, Europe, the United States and South Korea, where more than 40 million incense packages from his company have been sold.

“I hope where there are Chinese people, there is an incense culture,” Yang says.

As his business grew, Yang has provided job opportunities for local residents.

To hammer home to employees the importance of product quality, Yang has destroyed many boxes of incense that failed to meet his high standards and expectations.

“We should hold ourselves to a higher bar and be thorough, … so the goods can turn out to be of the highest quality,” he says.

Yang’s religious adherence to integrity has also won him a good business reputation. Once, a Japanese client placed a big order from his company after acquiring the incense during a prior visit to Chongqing. The client was willing to pay the same price as they had in Chongqing, which was much higher than that quoted by Yang’s company. Yang insisted on giving the client the correct, lower price. It won him a letter of thanks and appreciation for his honesty from the client. With the increasingly expanding market, Yang has also led his team to develop auxiliary machines, such as those for molding, drying and packaging, to complement the manual procedures.

“The addition of the new machines has not only improved the efficiency of incense production, but also ensured the quality of products,” says Yang Junming, who is in charge of the production workshop of Yang Jinqing’s company.

All those efforts have helped fuel the popularity of Qingyuan incense.

Yang Jinqing has also helped to establish an engineering center for herbal incense in Hebei that specializes in studying ancient recipes and culture, as well as developing new crafts based on the fragrance.

He has also opened incense museums where the public can see the production process firsthand.

His son Yang Xueming is also engaged in the trade and brings a new vitality to it.

“We might think incense culture is very elegant and, therefore, far away from us, but it is actually very close to our lives,” Yang Xueming says. “When drinking tea, playing chess, reading or writing, lighting an incense stick can help calm the nerves and concentrate the mind.”

The young man has also integrated traditional incense culture with modern methods to help deal with the sleeping problems that plague modern people.

He worked with the traditional Chinese medicine school, Hebei University, and has developed a tablet that can release a sleep-aiding fragrance after being put on a specially designed electronic heater.

“The effects have been proved through many experiments,” Yang Xueming says.

In December, the young man led a team to develop a series of incense products for use at night, which won gold at the Hebei Cultural Creativity and Tourism Commodity Creative Design Competition.

“I hope more people will participate in making incense, so it can become a rural industry that makes Qingyuan proud,” Yang Xueming says.

“We’d like to inject new blood to this ancient craft and help it continue to spread its fragrance to more families.”