“Urusei Yatsura” — the title can be roughly translated as “noisy folks” — started as a popular manga carried from 1978 to 1987 in the Shukan Shonen Sunday weekly manga magazine for boys published by Shogakukan Inc. The first TV anime version, broadcast from 1981 to 1986, caused a sensation.

Produced as part of Shogakukan’s centenary celebrations, the new anime is a collection of the most popular episodes from the original manga.

High school student Ataru Moroboshi has a face that attracts bad luck. He saves the Earth after winning a game of tag with Lum, a demon alien girl who came from outer space to conquer the planet, but Lum wrongly believes Ataru has proposed to her, and she decides to live on Earth.

I spoke with celebrated mangaka Rumiko Takahashi, the creator of “Urusei Yatsura,” and voice actors Hiroshi Kamiya (Ataru) and Sumire Uesaka (Lum) to learn about this simultaneously vintage and new work that has been shining brightly for more than 40 years.

Rhythm is most important
“I thought, ‘Why now?’ about the revival, but I’m happy,” said Takahashi, who drew the original manga. She has created many hit manga, such as “Maison Ikkoku” and “Inuyasha.”

“Urusei Yatsura” was her first work to be serialized in a magazine.

“I’d always liked science fiction, but my preferences were [sci-fi] novellas by Shinichi Hoshi and Yasutaka Tsutsui, writers with a sense of wonder, rather than more hard-core works. I also wanted to draw manga that makes you laugh despite being dark,” she said. 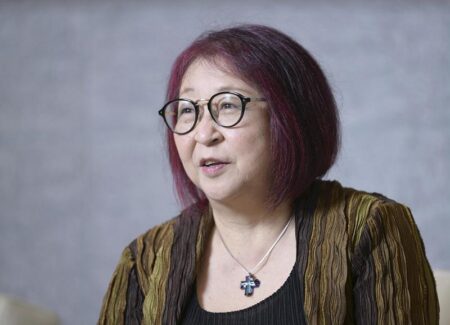 After deciding to draw a comedy, she designed Ataru as a high school boy with large white parts in his eyes.

“I originally thought that the series would have only five installments and that I’d lose out if I used a handsome kid in the story. Ataru’s face was the best fit. He’s the type of guy who gets embroiled in trouble, but I wished he’d face his mishaps with a positive attitude,” she explained.

In contrast, Takahashi prepared various designs for Lum before the character took the form we all know.

“There were versions with an Afro haircut or short hair. The tiger stripes [of her bikini] come from [the traditional attire of] the god of thunder. I didn’t particularly decide what color her hair was. The [first] TV anime made it green. She’s forward-looking and has strong self-esteem. I really wanted to make her look cute,” Takahashi said.

To give Lum a distinctive speaking pattern, Takahashi used the suffix “daccha” in her lines, citing it from a Sendai dialect quoted in a novel by Hisashi Inoue.

“Designing the girls was fun because they give me more creative liberty. But with boys, it’s a pain that I have to make even the hottest boys look stupid at times. It’s a little sad when I draw a handsome face and think he’ll act stupid, too. The characters in ‘Urusei Yatsura’ can do both the funny lines and the straight-man ones,” Takahashi said.

She thinks achieving a certain rhythm is most important when drawing a comedy manga. “It’s not that I made myself draw a funny scene once every certain number of pages, but I thought I shouldn’t draw stories that makes no one laugh,” she said.

The characters in the new TV anime are designed by Naoyuki Asano, and Takahashi has said she approves of his creations.

“I think you can enjoy watching them even if you compare them to the older version,” she said. “It’s a really silly story, so I hope you just enjoy it as it is if you’re watching it for the first time.”

Screaming ‘Argh!’
“I was surprised and elated that I could participate in a work I loved even before becoming a voice actor,” said Hiroshi Kamiya, who provides the voice of Ataru. Kamiya has been a big fan of “Urusei Yatsura” since childhood. He first encountered the work as a TV anime when he was in elementary school. In junior high, he bought every volume of the manga, using his otoshidama New Year’s cash presents and read them avidly many times.

“The way Ms. Rumiko [Takahashi] arranges the panels to convey the story is genius,” Kamiya said. “There are a lot of characters, but their roles are clear, and the manga is easy to read. I love this work so much. Now I understand it was made to entertain readers all the time.”

Every episode includes a scene in which Ataru has a big reaction, such as slamming a stupid joke or getting an electric shock from Lum.

“I thought I should work the hardest in those scenes, hoping they’ll get some laughs. Scenes like the ones with the electric shocks often end with me screaming ‘Argh!’ They really wear me out. I also have to do violent fluctuations in each and every line,” Kamiya said laughing. He said Sumire Uesaka and he were able to achieve a pleasant rhythm in their conversation scenes.

“The moment I heard her voice, I thought, ‘That’s Lum.’ She even convinced a long-time fan like me in an instant. I bet some people’s lives will be derailed by the Lum of the Reiwa era [2019-],” Kamiya said.

Lum is ‘natural star’
“Lum is a one-of-a-kind of character, so [playing her] made me worried. But I decided to do my best, because all the cast and the staff love this work so much,” Sumire Uesaka said.

“Urusei Yatsura” was created before Uesaka was born, but she got hooked on the first TV anime series, which she watched when she was in high school. “They all skip school or go to a cafe after school. Such an active student culture from the Showa era [1926-89] looked so fresh to me. I was also fascinated by the setting, which incorporated cross-cultural communication with Lum and other alien characters,” she said.

Lum is devoted to Ataru and very ingenuous. “She genuinely enjoys everything that’s new to her, such as the Earth and school, and she has such a sweet smile. She expresses her feelings without hiding them, which underlines that she’s a natural star with the air of a heroine. I think it would be great to be close to someone like that,” Uesaka said.

Lum calls Ataru “Darlin’” and always ends her line with the suffix “daccha.” Uesaka said she was especially determined to do justice to the character’s cute way of speaking.

“I try to come up with many ways to say Darlin’ and express a spirited personality. I think you can hear many kinds of Darlin.’” Even when she laughs or gets angry, Lum has a noble quality inside her. To show that side of her, I read out her lines from the manga many times at home.”