Spring is a time for refreshing thoughts when millions of Vietnamese take their Lunar New Year holiday to visit solemn religious destinations. Buddhists believe they need to visit pagodas or temples in the early days of the new year not only to pay respect to the master Buddhist monks but also to contemplate the beautiful landscape, cleanse their thoughts and bodies, and pray for blessings for the rest of the year.

Among the most sacred spiritual tourist destinations, the Yên Tử Famous Historical Relics and Landscape Complex, which spans three provinces, has become the trip everyone needs to make in a lifetime.

Expanding through the administrative boundaries of Quảng Ninh from the east, with Hải Dương and Bắc Giang in the west, the distant and secluded Mt Yên Tử, 1,068m above sea level, is where Buddhist King Trần Nhân Tông (1258-1308) chose to live, far away from any disturbance of the royal court. Today it has become one of the most visited spring destinations.

When King Trần Nhân Tông left the throne to retreat to Yên Tử in 1293, he also started life as a Buddhist monk and later found his school of Buddhism known as the Trúc Lâm Yên Tử (Yên Tử Bamboo Forest). Members of the Trúc Lâm congregation study and practice Buddhist customs, but when their duty for the country calls, they temporarily take off their monk robes and put on army uniforms. Afterwards, when peace prevails, they return to the life of a monk. While millions of Vietnamese may have visited Yên Tử Mountain, not many know why the forest is such an ideal enclave for a monk. Associate Professor Nguyễn Đình Hòe from the Việt Nam Association for Conservation of Nature and Environment set out to find out reasons why Yên Tử was able to accommodate the great Buddhist Monk-King Trần Nhân Tông.

First, he suggested that Yên Tử Mountain holds underground water resources, significantly more than other mountains in the area. Small springs of crystal clear water spurt out on the mountain slopes. At each of the spring sources, you can find a small pagoda. Even during the dry season, the water from the springs scattered around Yên Tử Mountain could still be fetched.

Smaller streams feed the region’s two major waterways of Yên Tử and Vàng Danh, which used to provide water for people living in Uông Bí town. Today Vàng Danh has been polluted due to coal exploitation in the Vàng Danh mine, and Yên Tử’s Giải Oan Spring water has been reduced due to deforestation. ICONS: Một Mái, Single-Roofed Pagoda, part of the Yên Tử complex, is the only place in Yên Tử that still has the system of worshipping statues and artefacts made of white-stone dating from the end of the Lê to the beginning of the Nguyễn Dynasties. VNA/ VNS Photo Tuấn Anh

Geographically, Yên Tử Complex’s mountains are lower than the ones further north but boast magnificent landscape, including Ngự Dội Waterfalls, the Gate to Heaven or Pine Forest Path and Bamboo Forest, where Buddhist shrines stand perched on mountain slope or upstream of a spring. The structures add religious and architectural values to the larger natural landscape, not overshadowing it.

Yên Tử Complex’s natural area reaches up to 2,686 hectares, with more than 1,700ha of natural preserves with many evergreen trees aged up to 700 years.

The rich sources of water nurture the wild flora and fauna of the region. The most famed plant of Yên Tử is the type of thin bamboo, which provides shoots for at least half of the year. Thus came the name of King Trần Nhân Tông’s Buddhist section: Yên Tử Bamboo Forest.

Throughout history, the monks were not only religious practitioners, they were also well-respected scholars and traditional herbalists who taught novices and children and concocted medicinal cures for people living nearby. The most resourceful local treasure is the plants. More than 300 types of plants with medicinal properties have been found here by the Institute of Ecology and Biological Resources. Mt Yên Tử is not the tallest top in the northeastern range, but rather lower. Many have dubbed it a sacred tower or the head of a giant elephant. White clouds gather around the 1,000m mark, so the mountaintop rises above the sea of clouds, a spectacular view for those who witness it. STUFF OF LEGEND: Emperor Hưng Đạo Đại Vương Trần Quốc Tuấn, one of the country’s heroes, is honoured at Kiếp Bạc Temple in the Yên Tử complex. The temple dates back to the 14th century, and now houses five bronze statues that are significant to Việt Nam’s religious and cultural heritage. VNA/VNS Photo Thành Đạt

Yên Tử is one of the influential Buddhist cradles of the country. It is associated with ancient gems of architecture built over the Lý, Trần, Lê and Nguyễn dynasties. Small pagodas, towers, and shrines are dotted across the mountains in perfect harmony with the natural setting.

The original Bí Thượng Pagoda was built during the Later Lê dynasty. The current pagoda we see today was rebuilt in 1993 due to the destruction during the first Indochina war in the 1950s.

Suối Tắm Pagoda is nestled by the foot of the mountain. Ornate with dragons and rolling clouds, it is a great starting point for an extended tour of the mountains.

Other pagodas, including Cầm Thực, Lân and Giải Oan were built during the Trần dynasty in the 13th to 15th century. But today’s pagodas have been rebuilt over ancient ruins. Hoa Yên Pagoda is located in the Yên Tử Monuments and Landscapes Complex. The pagoda was built during the Lý Dynasty and has been embellished numerous times throughout history. VNA/VNS Photo Thành Đạt

Today’s Trúc Lâm Zen Monastery is built on what used to be the largest Lân Pagoda of the whole complex. The compound now serves as the academy of the Trúc Lâm Buddhist school.

Other landmarks include the Jade Tower complex and the Ancient Huệ Quang Garden of 64 towers. The signature tower in the garden is the largest dedicated to the founding monk, Trần Nhân Tông, with a statue of him on the second level.

Small and beautiful shrines are scattered along the winding road, including the Meditation Shrine, located behind Hoa Yên Pagoda.

Chùa Một Mái (Single-Slope Roof Pagoda) is narrow, small and unique, and its original altar statues were made of marble in the later Lê and early Nguyễn dynasties. The ancient mandarin tree by the pagoda, the natural soap tree and various vegetables were also planted in this garden.

This pagoda originated from an ancient cave, which the king-turned-monk Trần Nhân Tông chose as a secluded place to read and write his Buddhist teachings. Named Ly Trần, or Escaping from Life, the shrine was later built to be Bồ Đà Pagoda, with one half of the roof being the cave ceiling and the other half built with tiles. 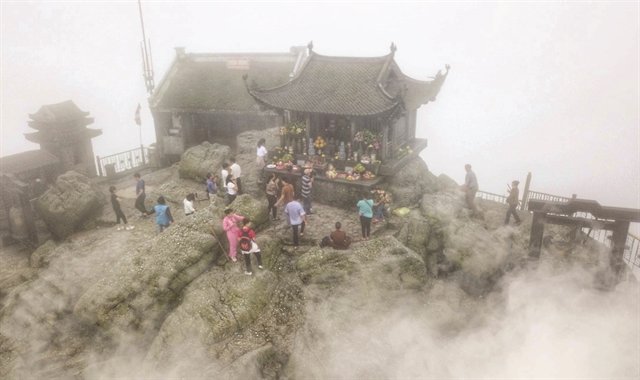 MISTY: The Bronze Pagoda on top of Mount Yên Tử resembles a blooming lotus rising from a dais also made of bronze. In recent years, lucky visitors were able to capture the lotus covered in snow, a beautiful scene. VNA/VNS Photo Thành Đạt

A slower and longer trip, where you can give thoughts to each and every step you make, lets visitors see more and touch upon history at every temple or pagoda. If you have the time, walking up to Bronze Pagoda on top of Mt Yên Tử is worth the time and effort.

But beware, there are long lines for those who take the faster cable trip to the top. I have tried both ways, walking to the top and taking the cable car.

Being able to see Yên Tử from the sky was fun, but I still remember talking to a 70-year-young lady who walked the winding steps right to the very top. She was slender, fast and healthy for her age. Her uplifting and cheerful spirit was the most impressive aspect of all. It inspired our small crowd that day, and we could only admire her.

For pilgrims, the journey walking up the mountaintop may mean more and be even more fulfilling than the quick ride to get to the top in the modern cable car.

Without question, the Yên Tử Complex is one of the most spectacular pilgrimage sites in the country today. VNS