The growth outlook puts pressure on the military backed government.

Lavaron Sangsnit, director of the Fiscal Policy Office, announced on Monday (October 28) that the Finance Ministry has cut its growth forecast to 2.8 per cent from 3 per cent previously estimated.

The major impact on growth is the contraction of exports, which is estimated to be 2.5 per cent this year, compared to the 0.9 per cent contraction predicted earlier. The impacts of the US-China trade war and the global slowdown have been blamed for the contraction. 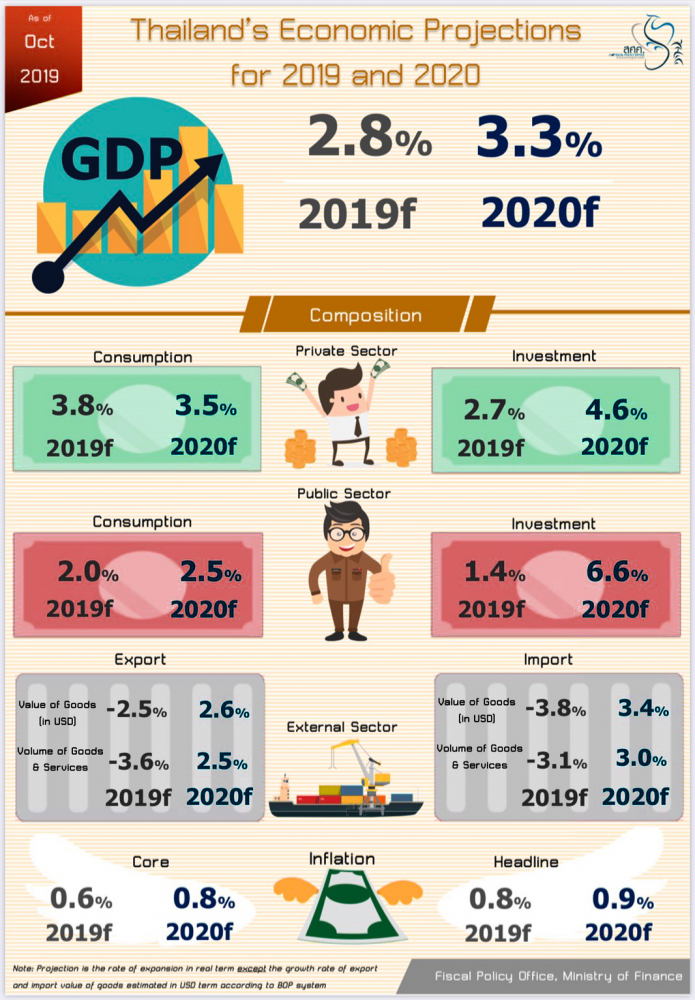 The ministry is however optimistic that exports next year will bounce back and expand 2.6 per cent year on year.

The recent government stimulus package is expected to expand the economy by 3.1 per cent in the final quarter of this year and by 3.3 per cent in 2020, compared to 4.1 per cent growth last year, he said.

However, the impacts of the trade war and the slowing down of the global economy remain major risks for Thailand.

Lavaron said that projected growth rate of 3.1 per cent in the second half this year was higher than in the first, which saw a growth rate of 2.6 per cent, and was due largely to the government stimulus package, which has injected about Bt60 billion into the economy. Of this amount, some Bt51 million is being used as an income guarantee for farmers and as cash handouts for the poor. The Eat, Shop and Spend scheme to promote domestic tourism is expected to inject about Bt10 billion into the economy, he added.

Pisit Puapan, director of macro-economic analysis division, said that the new forecast is based on the assumption that the economic growth of major trading partners would expand at 3.3 per cent, decelerating from 3.5 per cent previously estimated due to impact of slower growth in China and the US.

The number of tourist arrivals, meanwhile is forecast at 39.8 million, down from 40 million predicted earlier, largely due to slowdown of Chinese tourists in the first half of 2019. The Number of foreign tourists next year is expected to grow by 4.1 per cent to 41.5 million.

Public spending remains an economic driver as disbursement of current spending and capital spending is projected to be 98 per cent and 70.3 per cent respectively, he added.