TOKYO – Furyu odori, a collection of 41 traditional Japanese dances, is expected to be registered as an intangible cultural heritage by UNESCO.

The Cultural Affairs Agency announced Tuesday that UNESCO’s evaluation body has recommended its registration. The official decision is expected to be made at an intergovernmental committee meeting to be held in Rabat, Morocco, from Nov. 28.

Furyu odori are performance folk art featuring elaborate costumes and props, with people dancing to the accompaniment of singing and musical instruments such as flutes. A total of 41 such traditional dances from 24 prefectures are expected to be registered.

Among the dances are Bon Odori and Nembutsu Odori, including the Gujo Odori in Gifu Prefecture for which dancers gather from all over Japan. The Gujo Odori is known for its all-night performances with many rows of dancers surrounding a float. 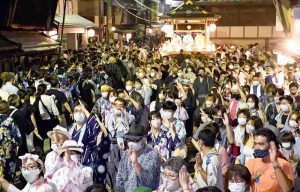 The Gujo Odori in Gujo, Gifu Prefecture, in August
The Yomiuri Shimbun

Participants in the Nishimonai Bon Odori in Ugo, Akita Prefecture, wear brightly colored costumes and straw hats, and dance in a flowing style. The Rokusai Nembutsu has been handed down in various parts of Kyoto, and the Ayako Odori in Manno, Kagawa Prefecture, is an event to pray for rain associated with the Buddhist monk Kukai.

Registration as an intangible cultural heritage requires the existence of a preservation system in the nation in question. Bon Odori are practiced throughout Japan, but the list was narrowed down to 41 dances that have been designated as nationally important intangible folk cultural assets and which local preservation societies are working actively to safeguard.

The Chakkirako dance in Miura, Kanagawa Prefecture, was registered as a UNESCO intangible cultural heritage in 2009. The government added 40 new dances and proposed grouping all 41 as furyu odori.

Many of the furyu odori date to the Edo period (1603-1867) or earlier, and developed in various regions as offerings to the dead or events to pray for good harvests and ward off bad luck.

The dances have been handed down through the ages, changing with shrinking populations, low birth rates and other factors.

Japan is prone to natural disasters, and the proposal for registration emphasized the cultural and social significance of the dances as a spiritual foundation for the revival of disaster-stricken areas.